Dublin Bus has confirmed that free Culture Night shuttle services that were scheduled to facilitate people attending events on Friday evening will not be available due to the planned strike by bus workers.

Dublin Bus workers went on strike for two days last week in a dispute over pay and will do so again this Thursday and Friday, 15 and 16 September, with a further stoppage on 23 and 24 September.

The company has confirmed services will stop at 9pm tomorrow "to ensure the safe and secure return of buses to each depot prior to the commencement of industrial action by all employees at midnight that night".

Dublin Bus has warned unions that their strikes are diminishing the company's ability to fund even the 8.25% Labour Court pay recommendation which was rejected by workers.

It added that a 2.75% annual increase for three years exceeds the norm of approximately 2% a year across the public and private sector.

Dublin Bus workers have sought an increase of 15% over three years - without any productivity concessions.

In addition, they are seeking a 6% award from 2008 which was unpaid due to the economic crisis, while  Dublin Bus drivers are also seeking parity with Luas drivers.

The company notes that in recent years, it has come through what it calls an extremely tough financial period due to the recession and has only just reached a stable financial footing.

It says that the 15% claim would cost €50 million over a three year period, which would seriously undermine the company's financial stability and would be unsustainable.

Unions at Dublin Bus have criticised both management and the Government for failing to make any move to resolve the dispute and warned that they are prepared to escalate the dispute if necessary.

The General Secretary of the National Bus and Rail Union said there had been total silence from what he called "official Ireland" - including the offices of the Minister for Transport, the National Transport Authority or the CIE Group since the industrial action began.

Dermot O'Leary accused those authorities of "playing foot-loose and fancy free" with a vital public service underpinning the economic and social fabric of Dublin.

He said that of all the options available to resolve the dispute, sitting on one's hands was not one of them.

He said this had created real anger and frustration among members, but had also strengthened their resolve to implement this week's industrial action, and to escalate the dispute if it is deemed necessary.

He described as "regrettable" the fact that Friday's strike will impact on Culture Night.

Minister for Arts Heather Humphreys has appealed to both sides in the dispute to return to talks to avoid further inconvenience for commuters, particularly ahead of Culture Night, which she said is one of the biggest events of the cultural calendar with more than 3,000 events being held around the country.

In Dublin alone, up to 172,000 people attended events in 280 venues around the city, with many travelling by bus.

Dublin Bus said that the Friday of Culture Night last year was busier than a normal Friday night, but said it did not have specific numbers reflecting the extent of the increase in passengers using the service.

Four free shuttle services were due to depart every 20 minutes from 6pm to 11pm this Friday, but these have been cancelled due to the strike.

"Quite rightly, Minister Humphreys is concerned about the impact of the bus strikes on Culture Night, but where is the concern for the hundreds of thousands of students, workers, pensioners, shoppers who have had their daily routines severely disrupted last week and potentially again this week?"

A spokesperson for the Minister for Transport said that like Minister Humphreys, Minister Ross is urging both sides to get back to the table and talk.

Culture Night organisers said in statement that the "Dublin Bus strike is a matter for the company and the unions", adding that they looked forward to a speedy resolution on the matter.

They urged would-be attendees to avail of other public transport options including the LUAS, the DART and the free bicycle service around the city.

They also noted that Q Park is offering a special Culture Night parking rate in certain car parks from 4pm to midnight - which must be booked online.

Over 400,000 passengers a day are affected each day that Dublin Bus is on strike, though that number could be higher if people planning to attend Culture Night are factored in.

The company said the industrial action was costing it €600,000 per day.

Mr Murphy defended the industrial action, saying that success in their fight to maintain an effective public bus company, which provides a high standard of service to its users and decent employment for its workers, was one that will benefit the city.

Representatives from the five Dublin Bus unions  will meet on Thursday to decide whether to step up their industrial action - with an all-out strike not ruled out.

Anti-Austerity Alliance TD Mick Barry has called for an emergency meeting of the Oireachtas Committee on Transport Tourism and Sport to be convened to discuss the Dublin Bus pay claim.

However, Mr Barry said he had so far received no response to his request. 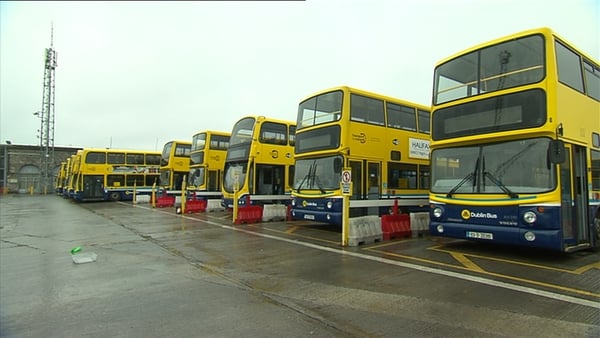