European nations failing to respond to their humanitarian obligations to refugees should learn the lessons of the Great Famine, President Michael D Higgins has said.

Speaking at the annual National Famine Commemoration at Glasnevin Cemetery, President Higgins claimed some of the rhetoric used today about those crossing the Mediterranean "marine grave" was similar to the British media's during the worst period of Ireland's 19th century catastrophe.

President Higgins unveiled a Celtic cross memorial to Ireland's one million famine dead following the failure of the potato crop.

He said: "As we pray for the souls of all of those lost to famine, and in particular those lost in our own Great Famine, we must pray, too, that we not be condemned to repeat the mistakes of the past as we deal with the challenges of feeding the hungry in our own times."

The Great Hunger between 1845 and 1849 saw skeletal peasants selling their only clothing in an attempt to survive.

Over a million people died of hunger and related diseases, and two million fled a country "with no hope".

Many who emigrated faced fresh marginalisation on arrival on foreign shores.

President Higgins asked: "Is there not a lesson for all of us, as we are faced in our own time with the largest number of displaced people since World War II, as the Mediterranean becomes, for many, a marine grave, as European nations fail to respond to their humanitarian obligations?

"Isn't some of the rhetoric invoked today similar to what in the worst periods were the opinions of the London Times?

"The moral principle - the moral challenge of our humanity- remains the same: should we adjust our populations to an abstracted economic ideology, or should we, rather, use the best of our reason to craft economic and social models that can anticipate the needs and care for the peoples who share this fragile planet?" 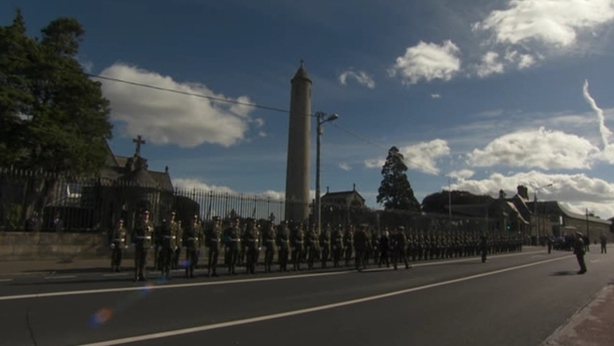 It was concluded by British administrators in the 1840s that the giving of relief directly to those dying would constitute a "moral hazard".

President Higgins noted it was important, in the minds of those who sought to respond to the Famine, to continue the project of moral reform even amidst the greatest loss of life.

"Avoiding the creation of dependency, as imperial elites saw it, was a target that could not be allowed to slip."

Minister for Arts, Heritage, Regional, Rural and Gaeltacht Affairs Heather Humphreys said the Famine left an "indelible mark on Ireland, devastating communities the length and breadth of this country."

"The annual Famine Commemoration provides us with an important opportunity to remember the one million people who perished, and the one million who were forced to emigrate as a result of the failure of the potato crop." 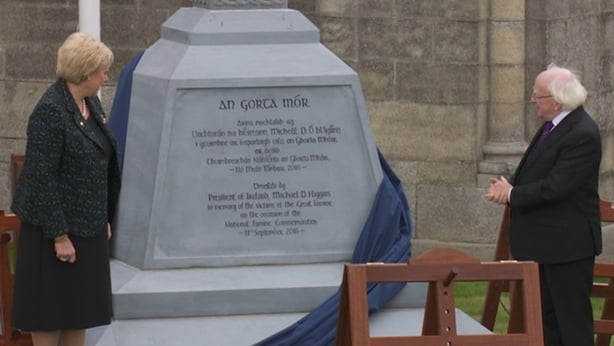 She said that during the height of the Famine, 50-60 funerals a day were taking place in Glasnevin, making it one of Ireland's largest Famine burial grounds.

"It is fitting therefore, that the Famine Cross will stand in Glasnevin as a permanent memorial to the Famine victims, adding to Glasnevin's status as a repository of our history," she added.

Chairman of Glasnevin Trust John Green said visitors to the cemetery are often surprised that it is also a famine burial site.

"Dublin became a refugee city, death rates soared. In this cemetery daily burial numbers trebled and tens of thousands are buried here as result of the famine or famine fostered fevers and diseases," he said.

"Hopefully commemoration such as this and memorials such as the cross we unveil here today will ensure that An Gorta Mór, which so brutally shaped our nation through suffering, sacrifice and emigration, will never be forgotten."