Taoiseach Enda Kenny had a phone conversation with Apple CEO Tim Cook on Sunday at Mr Cook's request, ahead of an EU Commission ruling that Ireland granted illegal state aid to Apple amounting to €13bn.

During the call, Mr Cook recommitted himself to the company's operations in Ireland.

The Taoiseach expressed support for Apple's presence in Ireland.

Minister for Finance Michael Noonan has said the Government intends to appeal the commission's ruling, but members of the Independent Alliance have expressed reservations.

However, a senior source in the group this evening told RTÉ News that the IA has no wish to destabilise the Government, and that IA ministers feel a deal is possible that would allow them to back a decision to appeal the ruling.

Tonight Independent Alliance Minister of State Finian McGrath said a decision must be made at Friday's meeting and that the matter must be sorted.

Detailed discussions are likely ahead of Friday when a Cabinet meeting on the issue is set to resume following inconclusive talks today.

The Taoiseach and Mr Noonan met independent ministers for an hour this morning ahead of a four-hour Cabinet meeting on the issue.

Mr Noonan and the Attorney General addressed the meeting. The AG will clarify a number of legal and technical issues at Friday’s meeting.

After the meeting, the Government issued a statement saying it "had a thorough discussion of the European Commission decision with regard to Apple, based on a Memorandum from the Minister for Finance proposing that Ireland lodge an appeal to that decision". 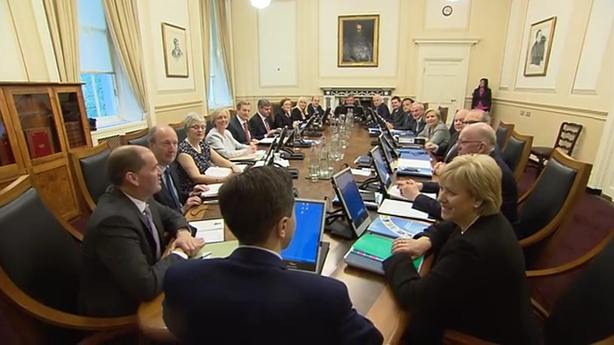 It continued: "Following the discussion, it was agreed to adjourn the meeting to allow further time to reflect on the issues and to clarify a number of legal and technical issues with the AG's Office and with officials.

"The Government meeting will resume on Friday at 11am to make a decision on the matter."

A Government spokesman said this evening that Mr enny had no aversion to recalling the Dáil but clarity on the Government’s position on appealing the ruling was needed first.

Independent Minister Katherine Zappone welcomed the adjournment, saying it was important to allow time for the issues to be further explored.

Minister for Transport Shane Ross has said there had been a very frank of exchange of views at the Cabinet meeting.

He said ministers had a great deal of reading to do as the judgment was lengthy and complex.

Finian McGrath said they would be consulting with the other members of the alliance and would not be commenting in detail on the meeting.

Mr Ross said they had difficulties with taking any of the courses proposed to Cabinet and did not know if those concerns would be met. He confirmed that the recall of the Dáil had been discussed.

Independent Alliance TD Kevin 'Boxer' Moran indicated that he would support an appeal, telling the Westmeath Independent: "We have got to show that if multinational companies come in here, if they get into difficulty, we are here to protect them.”

Responding to a request from RTÉ News about the availability of the Dáil chamber should the house be recalled, a spokesman for the Houses of the Oireachtas said: "The programme of improvements on technology supporting the Dáil Chamber is still ongoing.

"However, the Houses of the Oireachtas Service has a back-up sound system in place which could be used."

Earlier, the Taoiseach said time was needed to properly absorb the commission's decision.

Mr Kenny added that the decision created an "unprecedented situation" and it is important that everyone have the opportunity to have any anxieties they have addressed and to raise questions they may have.

He pointed out that it is a complex judgment that runs to 150 pages and it needs time to be absorbed properly.

Minister for Public Expenditure Paschal Donohoe rejected calls for an early recall of the Dáil to discuss the Apple case.

Speaking on RTÉ's Morning Ireland, he said that the Dáil will sit in a few weeks - it is next scheduled to meet after the summer recess on Tuesday, 27 September.

Mr Donohoe said considering the sum of money involved, he fully understands why the public might find this "a challenging decision for our country to make".

He said he "believes strongly that what we need to do here is to appeal this ruling but before we get to that point, Cabinet needs to first understand this matter and that's what we'll be doing today".

Speaking on his way into the meeting, Minister for Health Simon Harris said it was important for the Government to speak to the international community with one voice on the issue.

"It's important that all Cabinet ministers, including the independent ministers, get the opportunity to get fully briefed by the Minister for Finance."

"I'm sure our independent colleagues are looking forward to that opportunity before we reach a collective Cabinet position."

He added: "It's very important that the Government robustly addresses this matter."

Minister for Housing Simon Coveney rejected the suggestion that Ireland did a "sweetheart deal" with Apple.

"This issue was managed by Revenue and not by Government and Revenue are adamant there was no sweetheart deal."

Meanwhile, the European Commission has said Ireland would have discretion on how to spend the €13bn if and when it was recouped from the US multinational as a result of yesterday's decision.

At the commission's daily news briefing spokesman Ricardo Cardoso said: "The amounts that are recovered by a member state in a state aid investigation simply go back to the member state's budget.

"It can then use it, of course, according to its own decisions."

Elsewhere, US Ambassador to Ireland Kevin O'Malley has rejected a description of US companies in Ireland as "tax cheats".

In a speech in Dublin's Mansion House, Mr O’Malley said that corporations had a duty to minimise their taxes and also be compliant.

He pointed to the presence of US multinationals in Ireland and their Irish staff as evidence that Ireland is not a tax haven.

The Anti-Austerity Alliance has called on Independent Alliance ministers to oppose plans to appeal the commission's decision.

"A cynical attempt was made to pull the wool over the eyes of the public by saying 'even if we get the money, we can't spend it anyway because of the fiscal rules'," Mr Barry said.

"This has been exposed as untrue after the intervention of EU Commissioner Vestager and the admission by Minister Paschal Donohoe on Drivetime that any funds received by the State through the ruling could be spent on capital projects such as housing".

AAA TD Paul Murphy said the Government should welcome the Apple ruling instead of going to war to defend the right of the company not to pay tax.

He said the Government represents the interests of Apple and the model of this country is turning it into a tax haven.

He said there are multiple crises in Ireland, in particular housing, and the €13bn could be used to build homes, adding that the Government did not go to war in terms of fighting against the Troika or in terms of the minimum wage cut.

Labour Leader Brendan Howlin said he was shocked at the unpreparedness of the Government to the Apple decision but said the Government now needs to get on the front foot.

"Everybody who invests here wants to know with certainty what the tax regime will be.

"If that is undermined in any way, if there's uncertainty about it that really is a mortal blow to the strategy that has developed those hundreds of thousands of jobs over the last number of decades."

Social Democrats TD Catherine Murphy said that the European Commission's judgment should not be challenged.

She told RTÉ’s Drivetime that there is no preferential taxation treatment for SMEs, adding that "I don't think you can have a situation where some multinational companies can dictate national taxation policy because, if that's the situation, then you are asking people in the domestic economy, PAYE taxpayers and small business, for example, to invest in your education system; your infrastructure so as that the multinationals then can take advantage of that investment without paying the appropriate taxation."

She said it is absolutely appropriate that the Dáil debate this at the earliest opportunity.