Washington and Moscow have "achieved clarity" on the way towards a new ceasefire in Syria, but technical details must still be resolved, US Secretary of State John Kerry said today.

"Today I can say that we achieved clarity on the path forward" for a revamped cessation to the fighting, Mr Kerry told reporters alongside his Russian counterpart Sergei Lavrov after marathon talks.

Mr Lavrov added that "substantial agreements had been reached" while noting that "some things need to be finalised".

Mr Kerry stressed that the two sides were not prepared to make a definitive announcement, but said US and Russian technical experts would continue to meet in Geneva in the coming days to hammer out a set of unresolved issues.

"We are working on those issues," Washington's top envoy said.

"Neither of us is (ready) to make an announcement that is predicated by failure - we don't want to have a deal for the sake of a deal."

Mr Kerry linked the near total collapse of a previous ceasefire agreed earlier this year to the failure to respond to violations and the Syrian regime's efforts to reclaim strategic territory, including around Damascus.

As Mr Kerry and Mr Lavrov met at a hotel on Lake Geneva, residents and insurgents began to leave the beseieged Damascus suburb of Daraya where civilians have been trapped since 2012, witnesses said.

Rebels and Syria's army agreed yesterday to implement the plan to evacuate all the 4,000 residents and some 700 insurgents from Daraya in the coming days, ending one of the longest stand-offs in the civil war.

But the United Nations was not consulted on the plan and UN Special Envoy Staffan de Mistura and UN humanitarian coordinator Stephen O'Brien, voiced deep concern about it.

Civilians should be evacuated only if their safety could be guaranteed and it was on a voluntary basis, they said.

"It is imperative that people of Daraya are protected in any evacuation that takes place, and that this takes place voluntarily," Mr de Mistura, who leads UN political and humanitarian efforts in Syria, said. 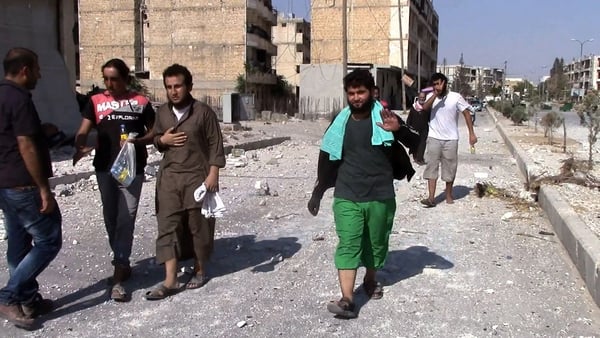 Thousands return to Syrian city Manbij after IS militants flee