An independent review of the case of a vulnerable teenager who took his own life while in the care of the State has criticised the absence of co-ordination of his care by public agencies.

The Independent Review Panel says that young people requiring care should not have to wait before being offered a placement with a foster family or in a secure unit.

The review of the death of the young person - named 'Adam' - is one of 13 published today by the panel chaired by Dr Helen Buckley.

Seven of the 13 deaths were by suicide while one was due to a drug overdose.

'Adam's' case is over a decade old and predates the creation of Tusla which took over Child and Family Services from the Heath Service Executive.

But the lessons are similar to those learnt from the later cases.

At the time of his death aged 14, 'Adam' had been in the care for 15 months beginning with when he clashed with his step-father and began missing school, drinking and taking drugs and eventually sleeping rough and engaging in crime.

The panel criticises numerous delays he experienced in getting placed in special care units.

The report says that in the absence of co-ordinated care by various agencies, his care by the State became increasingly reactive and driven by crisis management.

But, she said, Tusla needs to deepen its approach to risk assessments and follow-up of child sexual abuse allegations, and that more foster carers are required for young people with mental health problems and coping with disabilities.

An organisation representing people who have used the care system has said there are a lot of missed opportunities.

Shane Griffin of Care Leavers' Network Ireland said: "We are dealing with systemic issues and a lot of missed opportunities, and as a result we see these deplorable outcomes where people sadly lose their lives."

EPIC, an association that works with children and young people living in care, said one of the key findings is the need for "co-ordination and co-operation of services, in particular, between Tusla, mental health and disability services".

Tusla has published two reports into the deaths of children and young people who were known to child protection services.

The reports, compiled by the National Review Panel, highlight that the deaths were not as a result of the quality of services received.

The agency says it is taking steps to address the recommendations of the reports including the development of specialist services for children displaying sexualised behaviour and the improvement of its current child protection and welfare services.

Speaking on RTÉ's News at One, Dr Buckley said challenges will continue to arise if they are not tackled at a very basic level.

She said five of the 13 children who died were in care, the others known to child protection services.

Dr Buckley said the National Review Panel are notified of approximately 20 death cases per year, but that very few of them concern children in care but "they are mostly children who are known to the services".

She said in the case of 'Jeff', who died when he was 19 years of age, he had been in the care of the HSE/Health Board from the time that he was three years old.

"And certainly he didn't get a good service, but we can never really say what could have prevented a suicide because so many times there are so many other associated factors."

"I think there was an assumption made by the Health Board at the time that his placement was very settled; that he was with a long-term placement.

"There were no complaints about him or his behaviour and the area was under huge pressure, at the time, with a lot of other difficult situations to manage and I think it just got sidelined," she said.

Dr Buckley said in one or two of the cases the mental health services were "kind of scrappy. Excellent in some areas, but very very poor and difficult to access in others."

Tusla interim Director of Policy and Strategy Cormac Quinlan said: "Whilst the reports highlight that the deaths were not as a result of the quality of services received, Tusla continues to be committed to the constant improvement of the services we provide."

Speaking on RTÉ's Drivetime, Mr Quinlan said approximately over 5,000 children are awaiting the allocation of a dedicated social worker.

He said that children will wait varying periods of time, but that children in most need will be prioritised. He also said that discussions surrounding investment are ongoing with the Government, but he said the agency needs more money to provide the best quality of service.

Mr Quinlan welcomed the publication of today's reports, saying they provide transparency and openness in relation to the difficulty the service faces at times.

In a statement, Tulsa said it has developed a national approach to establish one common method that can be used collaboratively with families and professionals to get involved early to address children's needs and prevent the requirement for social work intervention.

Tusla is also working on a strategy aimed at developing a national approach to practice for social work led services.

Guidance has also been introduced to ensure social work interventions are made in an appropriate, proportionate and timely manner.

The agency is also developing a revised Alternative Care Strategy to enhance services for children in care to strengthen preventative strategies to support young people to remain safely at home, to explore and develop a range of care placements and to further enhance the provision of support to young people in aftercare.

Tusla says it is committed to safeguarding the mental health and well-being of young people in receipt of its services and is engaged in daily inter-agency work between social workers and other professionals.

Tusla and the HSE have two working groups meeting on a regular basis to look at enhanced collaboration for complex cases involving children with disabilities and children with mental health difficulties.

Training has also been provided to staff across the agency on suicide prevention.

Anyone affected by any of these issues can contact Childline. 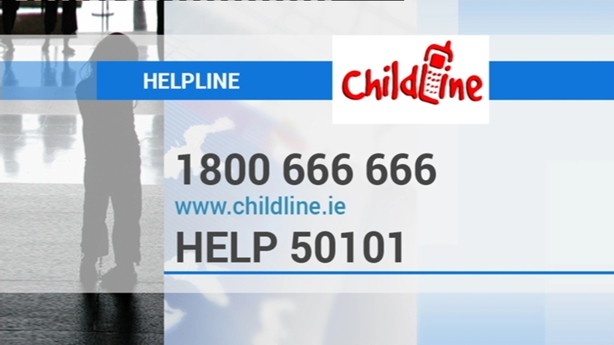