The National Bus and Rail Union has warned that a strike at Dublin Bus is looking inevitable.

NBRU General Secretary Dermot O'Leary said the company has been "eerily" silent on the matter following the rejection by workers of a Labour Court recommendation.

The court had recommended a pay award of 8.75% over three years.

Unions at the company have argued that they contributed to the company's recovery from recession through pay cuts, workforce reductions and cost-reduction measures.

They are seeking rises in line with the recent Luas pay award of 18.3%, which they calculate at 3.8% a year, and further increases to address the pay gap between Dublin Bus and Luas drivers.

Dublin Bus has said that its recovery is still fragile.

Speaking on RTÉ's Morning Ireland, Mr O'Leary said that "as things stand" there appears to be a determination at Government level to force people into disputes.

There are five unions involved in the dispute and the NBRU is to meet with other unions to plan a course of action.

Mr O'Leary said the union's executive council has taken the view that "because of the silence of both company and Government at this stage" that "nothing short of strike action would suffice here in order to move this thing along".

He said that would mean commuters could face both 24 and 48-hour stoppages, adding that "the nuclear option is there of all-out strike that nobody wants".

Mr O'Leary said that drivers would like parity with tram drivers and they are willing to discuss productivity once the issue of a flat pay increase has been sorted.

He said that workers have not had such an award in eight years.

Mr O'Leary said the gap between the award given by the Labour Court to Luas drivers and the recommended increase to bus drivers is 1.05%.

He added that if an issue cannot be resolved over a figure of 1.05% then there was something wrong with industrial relations in Ireland.

Minister for Transport Shane Ross has said it would not be helpful at this stage for him to intervene in the dispute. 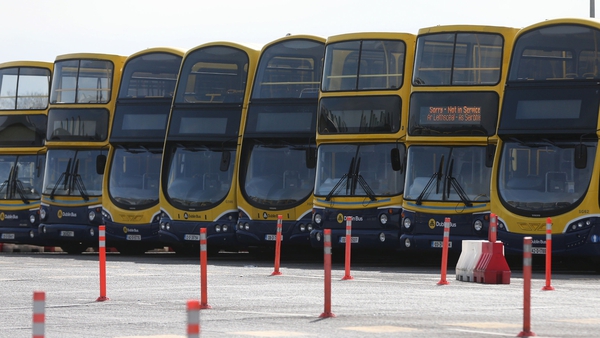