Brazil's Senate has voted to hold an impeachment trial for the nation's suspended president Dilma Rousseff, a process that could see her permanently removed from office.

The vote in favour of trying Ms Rousseff, who was suspended from the presidency in May, was 59 in favour, 21 against.

The Senate suspended Ms Rousseff, the South American nation's first woman president, on 12 May over accusations of illegal accounting practices and fiddling the budget to mask a slumping economy.

Ms Rousseff has likened the impeachment drive to a putsch by her political enemies.

The impeachment trial is set to open around 25 August - four days after the Olympics closing ceremony -- and is expected to last five days, concluding with a judgment vote.

The timing of the nation's ongoing political crisis could hardly be more awkward for Brazil, which was meant to be showcasing its burgeoning economic clout and political stability with South America's first Olympics.

At the start of the marathon Senate session, which got under way yesterday, Supreme Court President Ricardo Lewandowski reminded senators that they were about to "exercise one of the most serious tasks under the constitution."

Ms Rousseff's opponents had no trouble attaining a simple majority of the 81 Senate votes to begin steps to end her scandal-plagued presidency.

"What we are talking about today is defending the constitution and democracy itself. Those who commit crimes must be held responsible for them," said Senator Aecio Neves, one of Ms Rousseff's most fervent opponents rivals.

"The conditions are firmly in place for removing Dilma Rousseff," he said.

About 250 of Ms Rousseff's supporters demonstrated in central Sao Paulo, while in the Senate chamber in Brasilia her allies defended her.

"Today is not a good day for our democracy," said one, Senator Paulo Rocha.

He said: "There is a political alliance that smells of a coup."

Impeachment would not only seal Ms Rousseff's political fate, but would bring an end to 13 years of leftist rule in Brazil.

But in recent months, Lula, as he is called, has encountered political problems of his own.

Officials recently announced that the leftist leader will be put on trial for allegedly trying to obstruct a corruption probe at Petrobras, the national oil concern.

Since Ms Rousseff's suspension, her deeply unpopular vice president Michel Temer has served as Brazil's interim leader, as the nation struggles to emerge from its worst recession in decades.

Ms Rousseff's allies in the Workers' Party point out that many of the politicians accusing her are implicated in corruption cases arguably far more serious than accounting tricks.

But Ms Rousseff's enemies say the die is already cast, and predict her removal once and for all at the impeachment trial that gets under way later this month.

"The president is ever more isolated, a very pronounced isolation that has only gotten worse in recent weeks and now even includes her own party," said Senator Aloysio Nunes of the opposition party PSDB.

"I have no doubt that the vote will be in favour of impeachment, as it will be at the final trial," he told AFP ahead of the Senate session.

Ms Rousseff was jailed and tortured by the country's military regime in the 1970s when she belonged to an urban guerrilla group.

She rode Lula's coat tails to power when term limits forced him to step down in 2011.

Ms Rousseff is not facing corruption charges in the wide-ranging scandal. But she has been tainted by its stain on the Workers' Party, which is accused of lining its coffers with some of the missing billions.

If she is removed from office, Mr Temer, her centre-right running mate-turned-opponent, will become the full-fledged president until the next elections in 2018. He has urged the Senate to move quickly, saying "people need to know who the president is."

Mr Temer presided over the Olympics opening ceremony on Friday, drawing boos from the crowd - just as Ms Rousseff did at the opener of the 2014 World Cup - reflecting widening public disgust with Brazil's entire political class. 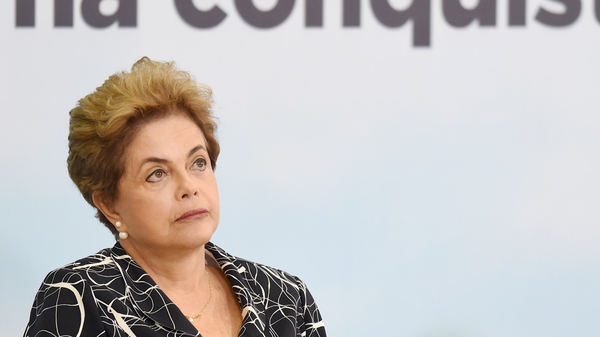