Rebel fighters pressed on with an intense offensive against a major military complex in the northern Syrian city of Aleppo today, following gains yesterday, to try to end a siege of opposition-held areas in the city's east.

The rebels are trying to break through a thin strip of government-controlled territory to reconnect insurgent areas in the west of Syria with their encircled sector of eastern Aleppo, in effect breaking a government siege begun last month.

Taking control of the Ramousah complex, which contains a number of military colleges, would isolate government-held western Aleppo by cutting the southern route out towards the capital Damascus.

It would also give rebels access to armaments stored in the base, which has been used by the Syrian army in the country's five-year conflict as a centre from which to shell opposition targets.

Two rebel groups said they had broken the siege today, but a monitoring group and pro-government online media outlets denied the claim.

Jabhat Fatah al-Sham, formerly the al Qaeda-affiliated Nusra Front, said in an online statement: "Fighters from outside the city met their brother fighters from inside the city, and work is under way to establish control over remaining positions to break the siege."

A commander from another, more moderate rebel group also said the siege had been broken but said it was early days and matters were "not easy".

The Britain-based Syrian Observatory for Human Rights said the siege had not been broken but fighting was intense.

The Observatory, which monitors the fighting, said rebels took control of the Weaponry College and part of the Artillery College yesterday. But the Syrian army said it had repelled the attack.

Rebels are now fighting to establish full control of the Artillery College, the Air Force Technical College and to make a firm link up with rebel-held eastern Aleppo.

A live Syrian state TV report from the outskirts of the artillery base in Ramousah, southwest Aleppo, broadcast the sound of gunfire, explosions and warplanes flying over.

The state television reporter said the Syrian army had closed the Ramousah road to protect civilians from a rebel advance, and a large number of army reinforcements had arrived.

Videos released by rebel groups claim to show gun battles as insurgents move into buildings in the complex.

Syrian President Bashar al-Assad wants to take full control of Aleppo, pre-war Syria's most populous city, which has been divided between rebel and government-held areas. Such a victory would be a crushing blow to the insurgents.

A quarter of a million civilians are thought to still live in Aleppo's opposition-controlled eastern neighbourhoods, effectively under siege since the army and allied militia cut off the last road into rebel districts in early July.

Residents on both side of the city are suffering. Government areas regularly come under attack from rebel shelling, and rebel-held areas are routinely shelled and come under air attack from Syrian and allied Russian forces.

Only 35 doctors remain in the city and over 100 people are in need of medical evacuation, SAMS Aleppo Coordinator Dr Abo El-Ezz said in a statement.

The complex, multi-sided civil war in Syria, raging since 2011, has drawn in regional and global powers, caused the world's worst humanitarian emergency and attracted recruits to Islamist militancy from around the world. 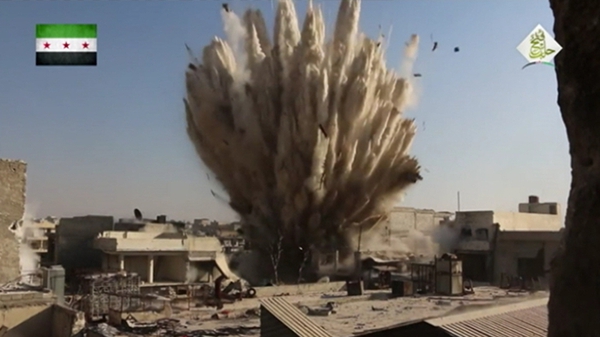