There is controversy in the US after aspiring first lady Melania Trump's speech at the Republican National Convention in Cleveland contained a section strikingly similar to that delivered by current First Lady Michelle Obama at the Democratic convention in 2008.

"My parents impressed on me the values that you work hard for what you want in life; that your word is your bond and you do what you say and keep your promise; that you treat people with respect," Melania, the wife of presumptive Republican presidential nominee Donald Trump, told the convention.

"They taught me to show the values and morals in my daily life. That is the lesson that I continue to pass along to our son," she added.

"And we need to pass those lessons on to the many generations to follow, because we want our children in this nation to know that the only limit to your achievements is the strength of your dreams and your willingness to work for them."

That small section of Melania Trump's roughly 15-minute speech, a highlight of the opening day of the convention, was similar to part of Michelle Obama's convention speech in 2008, in support of her husband Barack Obama.

"And Barack and I were raised with so many of the same values: that you work hard for what you want in life; that your word is your bond and you do what you say you're going to do;that you treat people with dignity and respect, even if you don't know them, and even if you don't agree with them," Michelle Obama said in her speech. 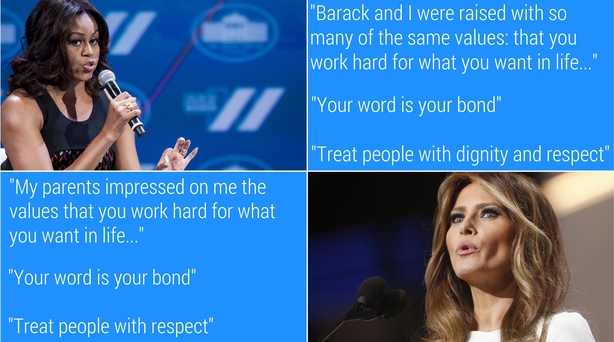 "And Barack Obama and I set out to build lives guided by these values, and pass them on to the next generations," she added.

"Because we want our children, and all children in this nation, to know that the only limit to the height of your achievement is the reach of your dreams and your willingness to work for them."

Before yesteday's speech, Melania, a Slovenian-born jewellery designer and former model, told NBC's Matt Lauer: "I wrote it ... with as little help as possible."

A Trump campaign official suggested the similarity to Ms Obama's speech may have been the result of an error by Ms Trump's team of speech writers.

A spokesman for the Trump campaign called the speech a success, but suggested Ms Trump's writers may have mistakenly injected some borrowed language.

"In writing her beautiful speech, Melania's team of writers took notes on her life's inspirations, and in some instances included fragments that reflected her own thinking," Jason Miller, Trump's senior communications adviser, said in a statement.

Trump campaign on Melania's speech similarity to @FLOTUS in 08.."included fragments that reflected her own thinking" pic.twitter.com/5FcYE5KAgw

In her first major political speech last night, Ms Trump portrayed her husband as a talented, compassionate and unrelenting leader who would unify rather than divide the USA if elected to the White House.

Mr Trump broke with tradition by appearing at the convention before his nomination.

Ms Trump spoke to a cheering crowd at the Republican National Convention in Cleveland after a one-minute introduction from her husband.

The presumptive Republican nominee made a dramatic entrance, silhouetted in a white background and to the accompaniment of Queen's 1977 rock anthem "We Are the Champions".

"I have see him fight for years to get a project done or even start it, and he does not give up. If you want someone to fight for you and your country, I can assure you, he's the guy.

"Donald intends to represent all of the people, not just some of the people. That includes Christians and Jews and Muslims. It includes Hispanics and African-Americans and Asians and the poor and the middle class", Ms Trump said.

Her comments were an attempt to soften the image of the New York businessman-turned-politician, who has been accused of bigotry and callousness for his calls to suspend Muslim immigration and deport millions of undocumented immigrants if elected. He has also been criticised for insults directed at women, political opponents and journalists.

Melania Trump, has been married to the business mogul turned presidential candidate for 18 years.

She became a US citizen in 2006 and called citizenship "the greatest privilege on planet Earth".

"My husband is ready to lead this great nation. He's ready to fight every day to give our children the better future they deserve. Ladies and gentleman, Donald J. Trump is ready to serve and lead this country as the next president of the United States," Ms Trump said.

Mr Trump is set to officially become the Republican presidential nominee later today as the party's delegates cast their votes at the convention.

Last night the convention descended into chaos when party leaders prevented delegates opposed to Mr Trump having their say.

There were angry exchanges when a vote that would allow delegates to back a candidate of their choice was quashed.

Some delegates walked out in protest while others chanted loudly.