The Republican National Convention erupted in chaos when some opponents of presumptive US presidential nominee Donald Trump stormed out of the room and chanted in protest at their failure to win a symbolic vote opposing his candidacy.

The turmoil threatened efforts by the Trump campaign to show the party had united behind the businessman-turned-politician and distracted from the day's theme of "Make America Safe Again," meant to depict Mr Trump as a strong leader capable of shielding the country from violence and Islamist militancy.

When party leaders by acclamation declared the opponents' efforts a failure for lack of votes, pandemonium erupted on the floor of the Cleveland basketball arena where Mr Trump is due to be formally nominated this week.

Many delegates began demanding a roll-call vote, chanting: "Roll Call. Roll Call." Others walked out of the convention floor saying they had to assess their next steps.

Mr Trump is due to receive the Republican Party's formal nomination for the US Presidency..

The furor, an embarrassment to Mr Trump, put a spotlight on the deep divisions within the party that have emerged over his candidacy.

A string of senior Republicans, worried about Mr Trump's temperament and policies, were already staying away from the convention.

An equivalent number of Cleveland police - some dressed in riot gear and some bearing bicycles that could be used to push back an unruly crowd - stood at the ready.

The crowd, which had marched a few miles to reach the convention site, was loud and their chants generally disjointed but they were peaceful.

Trump protest in Ohio ahead of Republican National Conventionhttps://t.co/sXhSnz0kBN

In the run-up to the Republican convention, there was much speculation that protesters representing a range of concerns would clash with police and with each other.

So far that has not happened.

Governor of Indiana Mike Pence is also set to be announced as Mr Trump's running-mate in the race for the White House.

There will be 2,472 delegates representing Republicans around the country casting votes, and despite rumours of a potential effort to stop him, Mr Trump will win the vast majority of them to be declared the official nominee.

Dozens of speakers will also talk about Mr Trump's virtues over the coming days, but given as many high-profile Republicans have opted out this year, they will be replaced by Mr Trump's family, friends and business acquaintances.

Amid tight security, thousands of Republicans will converge on Cleveland, though it is reported that former President George W Bush will not attend the convention.

With a significant number of protests expected, there are concerns for public safety around the convention in light of growing tensions in the US as a whole, recent high-profile shootings, and the 'open carry' gun policy in Ohio, which permits weapons to be displayed in public.

It's nearly time for #RNCinCLE...tune in @rtenews @morningireland to hear what's ahead for Donald Trump in Cleveland pic.twitter.com/d8SchKcJ8X

The head of a Cleveland police union has called on Ohio Governor John Kasich to declare a state of emergency and suspend laws allowing for the open carrying of firearms for the duration of the Republican convention.

Steve Loomis, president of the Cleveland Police Patrolmen's Association, told Reuters he was concerned about copycat shootings at the convention.

A spokeswoman said the governor lacked authority to suspend the open-carry law.

It comes as three police officers were shot dead and another three were injured in Baton Rouge, Louisiana, yesterday.

The gunman behind the attack has been identified as 29-year-old Gavin Long, a decorated US Marine.

According to Long's military record, released by the Pentagon, he served in the Marines from August 2005 until August 2010, achieving the rank of sergeant.

Listed as a data network specialist, he was deployed to Iraq from June 2008 until January 2009, earning several medals and commendations.

The shootings in Baton Rouge took place about 2km from the city's police headquarters, where dozens of people were arrested this month while protesting the death of a black man, Alton Sterling, who had been killed by police officers. The father of five was shot dead at close quarters. 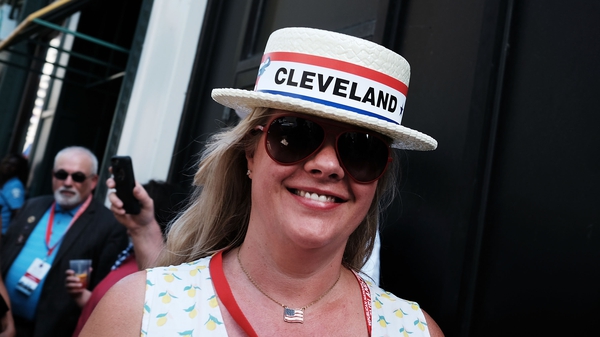