The number of people killed in Friday's failed coup attempt in Turkey has climbed to more than 290, the foreign ministry said.

Among the fatalities were 190 citizens, the ministry said in a statement.

The government had earlier put the death toll from Friday night's coup attempt at 265.

Meanwhile, President Recep Tayyip Erdogan has said that Turkey would consider reinstating the death penalty following the attempt to overthrow his government.

"In democracies, decisions are made based on what the people say. I think our government will speak with the opposition and come to a decision," he said, reacting to crowds in Istanbul calling for capital punishment.

"We cannot delay this anymore because in this country, those who launch a coup will have to pay the price for it," he told supporters after attending funerals for the putsch victims.

In the aftermath of Friday's foiled coup, there have been frequent calls from thousands of President Erdogan supporters for capital punishment to make a return.

Reinstatement would create further issues between the EU and Ankara in the already stalled membership talks.

President Erdogan repeated calls for the United States to extradite Fethullah Gulen, blaming the coup on the US-based Islamic preacher and his followers, which he describes as a terrorist organisation.

Mr Gulen condemned the military uprising "in the strongest terms" in a rare interview with reporters in Pennsylvania and rejected charges of being the coup mastermind, suggesting President Erdogan may have staged it himself. 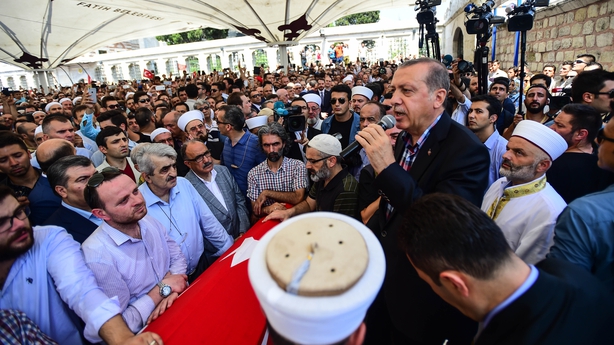 The Turkish president broke down in tears while speaking at the funeral of an old friend in Istanbul killed during the coup, images from Turkish television showed.

Erol Olcak and his 16-year-old son were shot dead on the Bosphorous bridge in the city during Friday's attempted coup.

They had been on the bridge to protest against the putsch launched by a group within the military, according to local media.

Preisdent Erdogan told the crowd of hundreds chanting Allahu akbar, "God is greatest": "Erol was an old friend of mine."

Unable to control his tears, President Erdogan then said: "I cannot speak any further. Condolences to our nation."

He concluded: "May God have mercy on your soul."

Mr Olcak had worked with Erdogan and the ruling Justice and Development Party (AKP) and had been described as "masterminding" President Erdogan's presidential campaign in 2014 by Turkish media.

The ceremony on the Asian side of the city was also attended by Ahmet Davutoglu, the former prime minister.

Earlier in the day, President Erdogan attended the funerals of other victims in Fatih mosque.

France's foreign minister has warned President Erdogan against using his country's failed coup as a "blank cheque" to silence his opponents.

His remarks came as Turkish authorities continued a crackdown over the coup, arresting over 6,000 people accused of involvement in the putsch or of supporting the coup plotters.

For several hours overnight on Friday violence shook Turkey's two main cities, as the armed faction which tried to seize power blocked a bridge in Istanbul and strafed the headquarters of Turkish intelligence and parliament in Ankara.

But the coup attempt crumbled as President Tayyip Erdogan rushed back to Istanbul from a Mediterranean holiday and urged people to take to the streets to support his government against plotters he accused of trying to kill him.