Days of fighting has threatened to plunge the nation back into civil war and bring further instability to an impoverished region of Africa.

Fighting erupted four days ago in the capital Juba between loyalists of President Salva Kiir and Riek Machar, the former rebel leader who became vice president under a deal to end a two-year civil war.

The violence has killed hundreds of people.

It broke out as the world's newest nation prepared to mark five years of independence from Sudan on 9 July.

Presidential spokesman Ateny Wek Ateny said Mr Kiir and Mr Machar had spoken by phone today, a day which saw tanks and helicopters involved in some of the fiercest clashes yet.

"All the commanders of (Kiir's) forces are directed to cease any hostility and abide by the order and control their forces," Mr Ateny said.

"President Salva Kiir is determined to carry on his partnership with Riek Machar."

Mr Machar responded by ordering his troops to stand down.

However much is not clear about the latest violence in Juba, including what the objective of either side has been and how much control Mr Kiir and Mr Machar have over their forces.

The fighting has raised fears of a return to the civil war that erupted in late 2013 and broadly ran along ethnic lines, pitting Mr Kiir, an ethnic Dinka, against Mr Machar, a Nuer.

The conflict killed thousands of people, forced more than 2.5m people from their homes and left almost half the population of 11m people struggling to find food.

Oil production, by far the biggest source of government revenue, has plummeted.

A new flare-up risks driving yet more people to refugee camps in neighbouring nations and further destabilising a region in the centre of Africa already plagued by myriad woes.

The UN Security Council yesterday demanded Mr Kiir and Mr Machar rein in their forces and end the fighting.

The UN mission in South Sudan, UNMISS, expressed its "outrage" after its bases in Juba were caught in the cross-fire between the two sides and two Chinese peacekeepers were killed.

Minister for Foreign Affairs Charlie Flanagan said he was concerned about the safety of Irish citizens in South Sudan and he was keeping a very close eye on the situation.

Speaking on RTÉ's Today with Sean O'Rourke, he urged Irish citizens in South Sudan to register with the Department of Foreign Affairs. 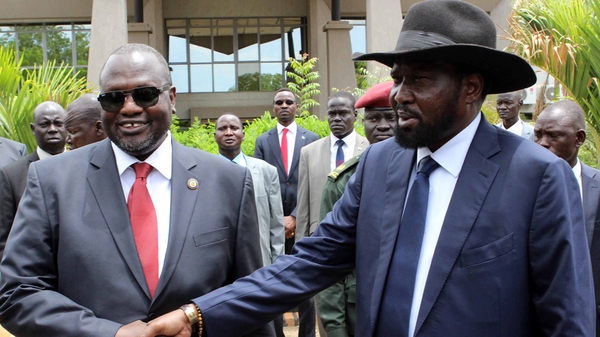