Independent Alliance TD and minister Shane Ross has said he will vote in favour of the bill on fatal foetal abnormalities.

The Minister for Transport, Tourism and Sport said Cabinet minister Finian McGrath and junior minister John Halligan would also vote for the bill.

Both Mr McGrath and Mr Halligan are members of the Independent Alliance.

Just to confirm, I *will* be voting in favour of Mick Wallace's Bill on FFA #repealthe8th

Independent TD Mick Wallace has tabled an amendment for this week to the Protection of Life in Pregnancy Bill to allow abortions in cases of diagnosed fatal foetal abnormalities.

Speaking on RTÉ’s Morning Ireland, Mr Ross said: "It is our intention to vote for the bill. It is the view the Independent Alliance that on issues of conscience and issues of this sort that there should be a free vote.

"Finian McGrath and John Halligan and I intend to vote for this bill and equally, we're very very happy with it because it's part of the new politics and what we believe in.

"Boxer Moran and Sean Canney will be voting against it because that's their sincere belief and we're very comfortable with that."

Minister for Finance Michael Noonan has said that Mr Ross' decision was a matter for him.

Mr Noonan said the Independent Alliance was divided on the issue, which was a sensitive one.

He added that it was up to the Independent Alliance members to make their own decisions on the issue as they were not members of Fine Gael.

Minister for Social Protection Leo Varadkar said he was in favour of changing the laws on abortion and there was a process in place with the citizens' assembly.

He said it is always right to be compassionate but it is not right to be false, adding that he believed Mr Wallace's bill to be unconstitutional.

He said how the Alliance voted was up to its members, but he added that they are going to come under pressure on a plethora of matters which could make their job more difficult.

Mr Varadkar said the vote would not destabilise the Government but he would not be surprised if other TDs put down legislation that was unconstitutional on the issue.

Meanwhile, Minister for Public Expenditure and Reform Paschal Donohoe said he believes constitutional change will be needed in the area of fatal foetal abnormalities.

Speaking on RTÉ's Today with Sean O'Rourke, Mr Donohoe said that the most important is that we do the "right thing by women" who are facing a terrible trauma.

He said he believed the bill is unconstitutional.

Mr Donohoe said the issue is one of conscience and it would be difficult to have a collective Cabinet responsibility on the matter, but he was confident the Government could work through the matter and recognise differing points of view.

Taoiseach Enda Kenny has said that five members of the Cabinet are not subject to the whip system and that it only applies to members of his party. 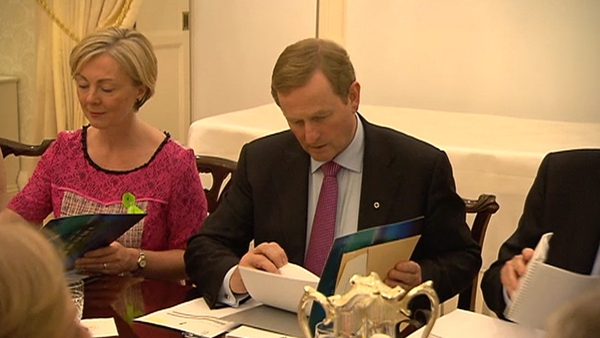