Minister for Social Protection Leo Varadkar has appealed to the unions who have not signed up to the Landsdowne Road Agreement to do so.

Mr Varadkar said the members of unions who did not would not have their pay restored and it was the only way such disputes could be solved.

Speaking in Belfast, the minister appealed to the small number of unions who had not signed up to the deal to reconsider their position.

Around 30,000 gardaí and teachers face the prospect of losing out on pay increases agreed under the LRA, which came into effect today.

The Association of Secondary Teachers in Ireland (ASTI) and the Garda Representative Association (GRA) have rejected the agreement, which means members stand not to benefit from terms which include incremental pay increases and job security.

Minister for Education Richard Bruton has said he remains hopeful that after inviting the ASTI to talks, that there can be a constructive dialogue between both sides.

The Association of Garda Sergeants and Inspectors is to reballot its members after rejecting the agreement and has recommended acceptance.

All the other public sector unions have backed the deal.

Minister for Public Expenditure and Reform Paschal Donohoe said that the benefits of the agreement will not apply to those unions that have rejected the agreement.

The ASTI has warned of industrial action this autumn if sanctions are imposed on its members.

Kieran Christie, General Secretary of the ASTI said that the union has accepted Minister Bruton's invitation to talks and there is every prospect "it may throw something up".

Speaking on RTÉ's Six One News, Mr Christie said that his members rejected the Lansdowne Road Agreement, highlighting that the three pay scales in teaching is unsustainable.

Mr Christie said: "The restoration of pay for newly qualified teachers has to happen sooner than 2018 and that's the bottom line."

He said the ASTI will ballot for industrial action in September, adding: "It will not be the ASTI that will be closing schools, it will be as a result of punitive measures that are being put into place to deal with something that has nothing to do with teaching."

The union staged a protest outside the Dáil today.

Members of the GRA executive staged a similar protest yesterday. 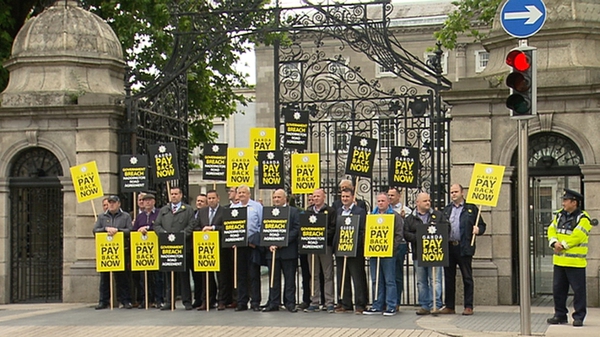