The European Parliament's chief has called for British Prime Minister David Cameron to begin formal proceedings to leave the EU at a summit this coming week.

Martin Schulz told German newspaper Bild am Sonntag that a period of limbo over Brexit would "lead to even more insecurity and thus endanger jobs".

"Hesitating simply to accommodate the party tactics of the British conservatives hurts everyone," he said.

"That is why we expect the British government to now deliver. The summit on Tuesday is the right time."

The four biggest groups in the European Parliament have also drawn up a draft resolution calling for Mr Cameron to set the Brexit ball rolling on Tuesday, Germany's Frankfurter Allgemeine Sonntagszeitung reported.

This was crucial, the groups wrote, "to avoid damaging uncertainty for all and to preserve the integrity of the union".

They added that "no new relationship of whatever kind between the United Kingdom and the EU can be agreed before (Britain's) exit accord has been completed".

Mr Cameron said on Friday in the wake of the shock referendum outcome favouring Britain leaving the EU that he would resign his office by October and leave negotiations on the so-called "Brexit" to his successor.

To begin the withdrawal process, Britain must invoke Article 50 of the EU's Lisbon treaty, which has never been used before.

The first step is to inform the European Council of member states which sets the clock ticking on a two-year timetable of negotiations.

The EU will hold a summit on Tuesday and Wednesday to discuss the fallout from the British vote and the European Parliament will also hold a special session.

Foreign ministers from the EU's six founding states meeting in Berlin on Saturday urged Britain to begin the exit process "as soon as possible".

However, Britain is set to resist pressure from Brussels and other EU capitals for a swift start to negotiations on its withdrawal from the bloc, Foreign Secretary Philip Hammond has indicated.

Despite a demand from European Commission president Jean-Claude Juncker - backed by the foreign ministers of France and Germany - for the process to begin "immediately", Mr Hammond insisted that "nothing is going to happen at the moment".

The timing of the formal notification of intention to leave the EU, set out in Article 50 of the Lisbon Treaty, is in Britain's hands and talks will not start until a new prime minister is chosen to replace David Cameron, he said. 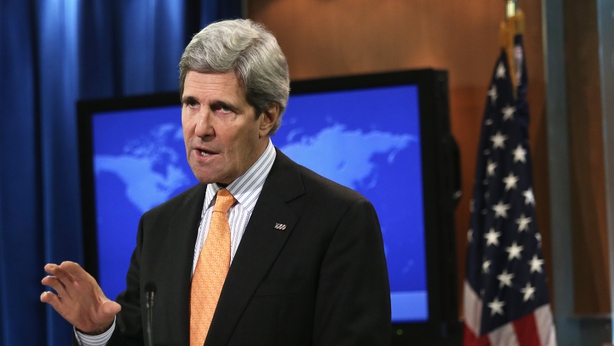 The senior official said Mr Kerry would stress the importance of other members not following Britain and further weakening the EU.

US President Barack Obama had urged voters in Britain - long seen as Washington's closest European ally - not to approve Brexit.