European Commission President Jean-Claude Juncker insisted that Britain's decision to leave the EU was not the beginning of the end for the bloc.

Answering a question from a reporter at a packed news conference in the EU executive's Brussels headquarters, Mr Juncker replied simply, "No."

That drew applause from EU officials in the room as Mr Juncker left after taking just two questions.

He had begun his news conference by reading out a joint statement issued earlier by the heads of EU institutions.

Earlier, he reassured Britons working for the EU executive that their jobs are not at risk following the vote.

EU civil service jobs are generally restricted to EU citizens and Britons will lose that status once their country has completed its departure. Mr Juncker sent a mail to staff saying that people would not be forced out.

Senior officials have said they may leave the EU service, however, since career moves into the higher grades in Brussels requires political patronage from EU member governments.

IMF warns of consequences of Brexit on Ireland's economy

In a statement released this evening, the IMF said: "Ireland's economy has seen a remarkable turnaround, thanks to the hard work of the people and government. Broad-based economic growth is solidifying and unemployment is receding."

However, the IMF also warned: "The vote in the UK to leave the EU, if accompanied by a marked slowdown in the UK and in the rest of Europe and a surge in financial market volatility, would have a significant adverse effect on Ireland."

Special relationship between US and UK is enduring - Obama

"The people of the United Kingdom have spoken, and we respect their decision," said US President Barack Obama in a statement this afternoon.

"So too is our relationship with the European Union, which has done so much to promote stability, stimulate economic growth, and foster the spread of democratic values and ideals across the continent and beyond.

"The United Kingdom and the European Union will remain indispensable partners of the United States even as they begin negotiating their ongoing relationship to ensure continued stability, security, and prosperity for Europe, Great Britain and Northern Ireland, and the world," the statement added.

German Chancellor Angela Merkel has expressed "great regret" at the UK's decision to leave the European Union but insisted the bloc was "strong enough" to find the "right answers" to the challenges it faces.

Speaking in Berlin, she said the EU had contributed to peace on the continent, but that stability could not be taken for granted in a "world of turmoil".

"The idea of European unification was the idea of peace after centuries of horrendous bloodshed," she said.

"The founding fathers found a way to come together and it was manifested in the Treaty of Rome almost 60 years ago. For the future, we should not take this for granted.

"We can all see that we are living in a world of turmoil."

Vote result is a 'grave test for Europe' - Hollande

French President Francois Hollande said that Britain's vote to leave the EU was a "grave test for Europe" in view of the economic and financial consequences.

"The British vote poses a grave test for Europe, which must show solidity and strength in its response to the economic and financial risks," Mr Hollande said after meeting with his cabinet.

Expressing his chagrin over the vote, he said: "It always takes less time to undo than to do, to destroy than to build."

But "the choice is theirs, and we must respect it," the Socialist president said.

Echoing Foreign Minister Jean-Marc Ayrault's tweet earlier Friday that Europe must win back the trust of its people, Mr Hollande said "the decision also requires a lucid awareness of the inadequacies of Europe's functioning and people's loss of trust in the project."

Brexit could also further support for far-right elements in the EU, he warned, saying: "There is a huge danger in the face of extremism and populism."

The French leader had on Wednesday warned that Brexit would have "extremely serious consequences".

Prime Minister Manuel Valls said the vote revealed "a malaise that has been ignored for too long" within the EU.

European Union president Donald Tusk said the bloc was determined to stay unified after Britain voted to leave and warned against "hysterical" reactions.

"Today on behalf of the 27 leaders, I can say that we are determined to keep our unity as 27," Mr Tusk told reporters in Brussels, adding that "it is a historic moment but for sure not a moment for hysterical reactions."

His comments come as the European Parliament's chief expressed hopes that Britain's decision to leave the EU would not lead to contagion, as Germany's finance minister said clear procedures for an exit from the bloc provided "reliability".

Dutch Prime Minister Mark Rutte said the vote must be the stimulus for more reform in Europe.

He added that the decision appears to be "irreversible", but added it may take a long time to implement.

A number of far-right leaders, including France's Marine Le Pen and Dutch anti-Islam MP Geert Wilders, have called for similar referendum's on EU membership in their own countries.

"The Dutch people deserve a referendum as well. The Party for Freedom consequently demands a referendum on NExit, a Dutch EU exit," Mr Wilders said in a statement.

"We want be in charge of our own country, our own money, our own borders, and our own immigration policy," Wilders said in a statement.

"If I become prime minister, there will be a referendum in the Netherlands on leaving the European Union as well. Let the Dutch people decide."

"Victory for Freedom! As I have been asking for years we must now have the same referendum in France and EU countries," she tweeted.

The eurosceptic, anti-immigration FN has accused the EU of suffering a "democratic deficit" and has long urged all members of the bloc to follow Britain's example. 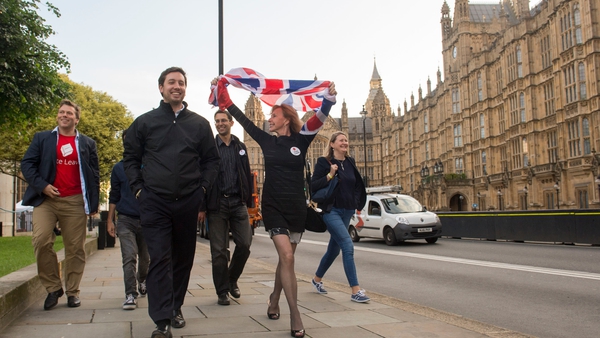