Nigel Farage has called for the referendum day, 23 June, to be declared a bank holiday, saying that it will "go down in our history as our independence day".

Hailing an escape from the EU which had been achieved "without a single bullet being fired", he said he hoped the vote for Brexit would bring down the entire "failed project" that is the EU.

"Eurosceptic parties never talked about leaving the EU, now they are," he said.

"An opinion poll in the Netherlands said that a majority there now want to leave, so we may well be close perhaps to Nexit.

"Similarly in Denmark a majority there are in favour of leaving so we could be quite close to Dexit.

And I'm told the same may apply to Sweden and perhaps Austria and perhaps even Italy too.

"The EU is failing, the EU is dying, I hope that we've got the first brick out of the wall." 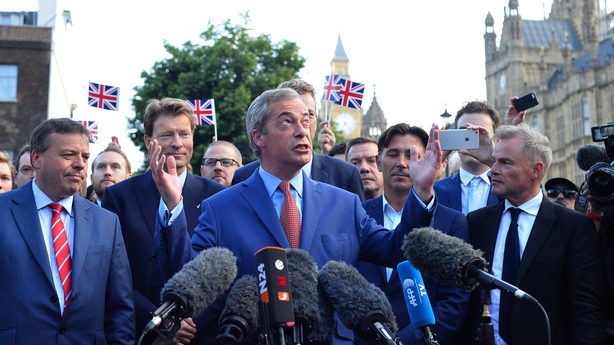 Mr Farage said it was vital to move rapidly to the implementation of the EU vote.

"We need the negotiations to start as soon as humanly possible, we need to start thinking globally about our future," he said.

He added: "Two things need to happen - one is a Brexit Prime Minister, and secondly we need a negotiating team who are going to go to Brussels to get us our new deal.

"But also, simultaneously, let's start negotiating not just with Brussels but with the rest of the world because the real opportunity we have got from Brexit is that we have left a failing political union in Europe, we can now start to re-engage with the world."

Mr Farage accused Mr Cameron and Chancellor George Osborne of behaving in an "appalling" way during the campaign and said they had left the Conservative Party "literally split down the middle".

But he said that old Labour voters had won the election for Leave.

"The election was won in my view in the Midlands and the North and it was the old Labour vote that came to us and we, particularly as a party, campaigned as hard as we could in those areas," he told reporters on College Green in Westminster.

"There is still a massive disconnect between Westminster, SW1 and real communities."

He told the BBC Radio 4 Today programme: "We recognise it, I hope we're having it as a national holiday. There are 183 countries in the world who have independence day - what we have just done is we voted to become the 184th.

"We have broken free from a failing political union. We have managed, the little people, the ordinary people who have ignored all the threats that have come from big business and big politics and it has been a huge, amazing exercise in democracy."

"And today honesty, decency and belief in nation, I think now is going to win.

"And we will have done it without having to fight, without a single bullet being fired, we'd have done it by damned hard work on the ground."