A jaguar trotted out for the Olympic torch's passage through Brazil's Amazon was killed shortly afterwards when it escaped its handlers and threatened a vet, the Brazilian military said.

The feline, whose species is the symbol of the Amazon, was shot dead in the northern city of Manaus on Monday soon after it was photographed with the torch passing by.

An attempt to use tranquiliser darts on it failed.

"It escaped and ran off as it was being moved from one area to another in the zoo," said Colonel Luiz Gustavo Evelyn.

He said that, once located, the jaguar was hit by four tranquiliser darts. But they did not slow it down and it turned on a veterinarian, forcing the soldiers to use bullets, he added.

"To protect the handler, it was sacrificed," Col Evelyn said.

The organising committee of the Rio Games said it was "very unhappy" about the jaguar's killing. 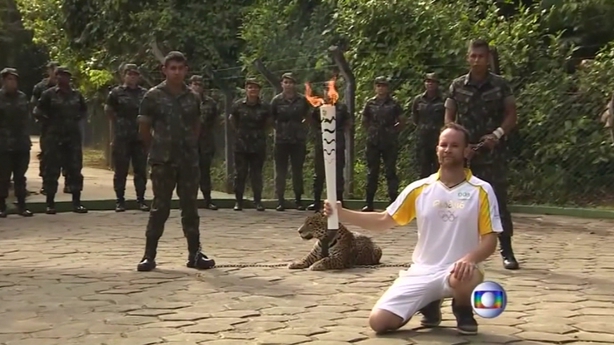 "We erred by allowing the Olympic torch, a symbol of peace and union among people, to be displayed next to a chained wild animal. That contradicts our beliefs and values," the committee said in a statement.

"We are very unhappy with the outcome ... We guarantee there won't be more situations like this in the 2016 Rio Games."

The animal, a 17-year-old female named Juma, had been raised since it was a cub and was kept in the military-run zoo in the Amazon with half a dozen siblings.

Just before its escape, it and another jaguar had been exhibited as the Olympic torch crossing Brazil passed through the zoo on its way to Rio de Janeiro, which is hosting the Games due to start 5 August.

"Unfortunately, this occurred the day of the torch's passage," Col Evelyn said. "The animal participated in the event because the torch went through the zoo."

He added that Juma was not a wild animal, having been raised in captivity, and called her death "very sad".

The military has opened an investigation into the incident.

A US-based animal rights group said it was a "needless death".

"Wild animals held captive and forced to do things that are frightening, sometimes painful and always unnatural are ticking time bombs - our actions put them and humans at risk," Brittany Peet of People for the Ethical Treatment of Animals (PETA), said in a statement.

The jaguar is the biggest feline in the Americas. It can weigh up to 135kg and is in danger of extinction.