The Deputy Secretary General of the OECD has described presumptive US Republican Presidential nominee Donald Trump as a "lunatic" whose political rise mirrors that of Hitler and Mussolini.

Speaking on RTÉ’s This Week, Doug Frantz said rising global inequality had given rise to populist figures like Mr Trump, which he said was "very close to the definition of fascism". 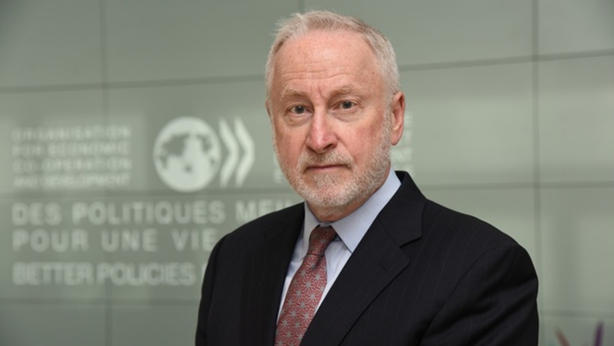 Mr Frantz also said that the prospect of Mr Trump winning the US Presidency represented "a real threat".

"The person who sits in the White House is the most powerful person in the world and if that person is someone who follows every whim and appeals to the most base instincts of a population, then we’re all under real threat".

Founded in 1966, the Organisation of Economic Co-operation and Development promotes "policies that will improve the economic and social well-being of people around the world".

The organisation’s Base Erosion and Profit Shifting, which targets aggressive tax-avoidance by companies was endorsed by the G20 in February.

Asked what his assessment of Ireland’s tax regime was, Mr Frantz said "I think the responsibility belongs to the US Congress for its repeated failure for decades to reform the corporate tax structure in the United States and also an equal share of the blame goes to greedy multinational enterprises that search for the best tax opportunities available for them.

Mr Frantz, a former Pulitzer prize-winning investigative journalist and a former employee of the US State Department, said he believed the leaking of the Panama Papers, which exposed the offshore tax arrangements offered by Panama had "shamed" the Central American country.

"The Panama Papers has shamed Panama and rightly so" he said.

"Panama has had a ‘come to Jesus’ moment and we’ve seen them around the OECD lately. They’re looking for a way out of this hall of shame in which they find themselves."

"I think it’s extortion because Tayyip Erdogan, the President of Turkey has demanded in exchange for this money; in exchange for allowing the EU to outsource its migration problem to Turkey; he’s demanding visa-free access to the EU for Turkey; he’s demanding an acceleration of Turkey’s accession package and this comes at a time when Turkey is moving in completely the other direction in terms of what you want in the European Union, I’m sorry to say".

Mr Frantz the said the president of Turkey, an OECD member had "become a very authoritarian leader".

"Human rights are at risk in Turkey; freedom of expression is disappearing in Turkey; and so you have this very bad political situation in Turkey and yet Europe, because it doesn’t want to develop its own policies and spend this money where it should is outsourcing this problem to Turkey: I think that’s a pretty classic definition of extortion", he said.