Eight pilot whales have died after a mass stranding on the coast of Indonesia's main island of Java.

"At first there were just one or two whales swimming near the shore, and the nature of whales is that if they are sick they will come near the shore," Dedy Isfandi, the head of the local maritime and fisheries office, told AFP.

"But whales have such high social interaction - when one fell ill, they approach the sick one to swim back to sea ... when the tide fell all of them were trapped," Isfandi added.

Hundreds of local fishermen and government officials tried to take them back out to sea overnight, but in the morning eight whales had returned to shore and died, Isfandi said.

About 23 others were already out at sea while one disoriented whale was accompanied by some rescuers to make sure it did not return to shore.

Rescuers used tarps to wrap around the beached sea mammals and pull them out to sea while swimmers plunged into the water to drive others out of the area. 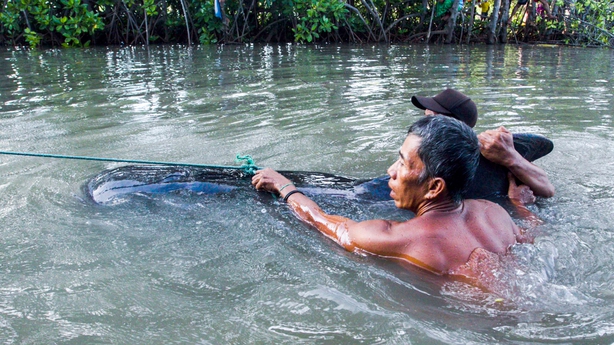 Vets and scientists conducted autopsies on the dead whales to find out why they were stranded, but fishery officials said it could be due to turbulent waters in the Indian Ocean or they may have eaten something poisonous.

Over the past decade or so, whale sharks and orcas were also found stranded in the area, Isfandi said.

Conservation group International Union for Conservation of Nature said there was insufficient data to classify the risk of extinction of short-finned pilot whales, which are found in warm temperate to tropical waters.