Nigel Farage and Bob Geldof engaged in a war of words as rival fleets of boats backing the Leave and Remain camps in UK EU referendum clashed on the River Thames.

The Brexit contest took a bizarre turn as Mr Farage led a flotilla of vessels along the river in London in protest at fishing policies from Brussels.

But the 'Fishing for Leave' flotilla was met by rival boats backing a 'Remain' vote, with Mr Geldof branding Mr Farage a "fraud" as he fired a broadside at the UKIP leader.

Small inflatable boats flying flags backing the In campaign skimmed around the larger fishing vessels - with some Remain protesters given a soaking by hoses on the trawlers.

Mr Geldof and his Remain supporters blasted out the song 'The In Crowd' from a large on-board sound system on their river cruise boat as they pulled alongside the vessel carrying Mr Farage.

Addressing Mr Farage over the PA system, Mr Geldof said: "You are no fisherman's friend." 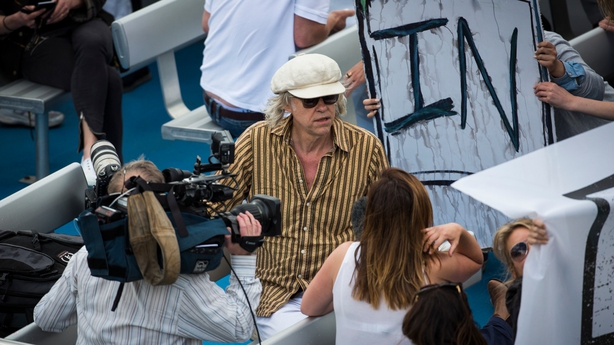 He said that while Mr Farage was on the European Parliament fisheries committee he attended just one out of 43 meetings.

"You are a fraud, Nigel. Go back down the river because you are up one without a canoe or a paddle."

Speaking to reporters accompanying him on the Thames, Mr Farage branded the Geldof protest "just disgusting".

He added that Mr Geldof was "deeply ignorant about how the Common Fisheries Policy works" and "it ill befits multi-millionaires coming to drown out ordinary men and women from the fishing industry who have come to have a fair say". 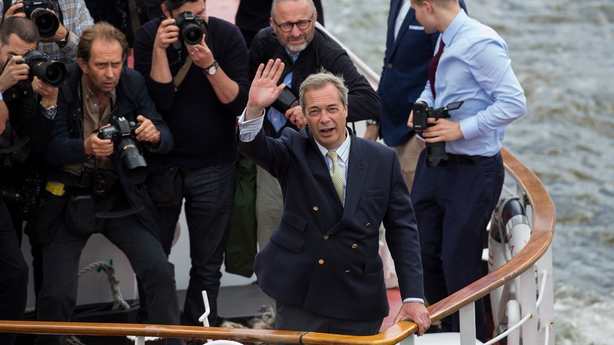 He added: "The Common Fisheries Policy works on the principle of equal access to the common resource. What that means is that we have to share the fish in our waters with the rest of the European Union.

"Sensible countries like Norway, the Faroes and Iceland do no such thing. These industries, these communities have been devastated now for decades and they have come here today to be heard."

The flotilla, which involved around 30 vessels, passed Parliament as David Cameron and Jeremy Corbyn engaged each other at Prime Minister's Questions.

The Prime Minister said the UK fishing industry had grown by around 20% thanks to government reforms, and insisted it would be hit with tariffs on the sale of fish if Britain pulled out of the EU.

Mr Cameron spoke after Mr Corbyn criticised the government for giving the majority of its fishing quota to large companies, urging people to "stop blaming Brussels".

He said the industry and his community had been badly hit by the EU rules and added: "I hope my countrymen have the courage, like the men who went into the trenches, to say 'we are going to be a free nation again and we are going to flourish great and free'."

Despite the occasionally rowdy scenes on the water, a Metropolitan Police spokeswoman described the event as "good natured on both sides".

The Port of London Authority (PLA) oversaw the vessels and spoke to Leave and Remain campaigners about excessive noise near HMS Belfast in the Pool of London.

According to opinion polls, voters are sharply divided over next Thursday's referendum, which will determine whether Britain stays in the 28-member bloc it first joined in 1973.