Fianna Fáil's Denis O'Donovan has been elected Cathaoirleach of the new Seanad.

It had been flagged that Fine Gael would back Mr O'Donovan in the vote for the role that is usually held by a Government senator.

This is yet another sign of the much talked about "new politics" in Leinster House, the politics that is underpinning the minority Government.

In return for its backing of Mr O'Donovan, Fine Gael will expect support from Fianna Fáil when the job of leas-chathaoirleach comes to a vote next week.

Speaking in the House following his election, Mr O'Donovan said "he would be fair and reasonable" in the role.

He also paid tribute to his partner of 11 years, adding "he doesn't know how she has put up with him."

Of more pressing concern for Fine Gael was the election of a leader in the Upper House, with the job eventually going to Jerry Buttimer.

It had previously been expected that Taoiseach Enda Kenny would appoint former health minister James Reilly to the role.

The Seanad has been adjourned until next week when the election of leas-chathaoirleach takes place.

25th Seanad convened for 1st time today-103 days after the general election. It's just adjourned for a week @rtenews pic.twitter.com/J4c2jCCcrR

A group of independent Senators are to table a bill that would implement the recommendations of the Manning Report, which would radically reform the Upper House.

The independent Senators said this morning their bill would implement the report, which would see 30 Senators elected directly.

The Manning Report, published in 2015 arising from a working group on Seanad reform led by NUI Chancellor Maurice Manning, a former leader of the Seanad, recommended that a majority of seats in the Upper House be elected by popular vote.

It also said that citizens eligible to vote in the university constituency should be required to choose between voting in that constituency or one of the five panels open to all citizens.

The electorate would include Irish passport holders in Northern Ireland and abroad.

Speaking on RTÉ Six One News, Senator Higgins said that Senators are committed to delivering on Seanad reform. 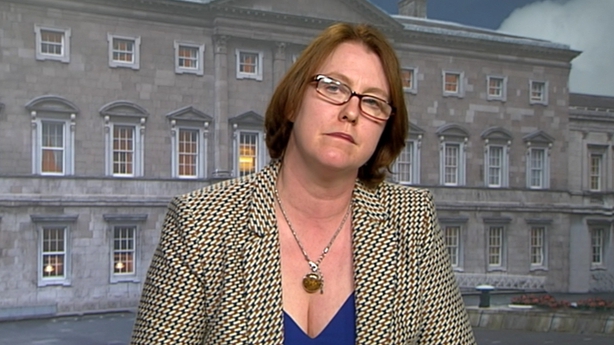 She said that Senators have put forward legislation; a bill to implement the recommendations of the Manning Report, adding that it will bring forward very substantial changes.

Senator Higgins said that it woulds allow every citizen one vote, saying the legislation is a signal and a sign to the public that Senators are leaving a legacy of doing things differently.

She said she hopes all parties will engage with them on it.

Mr McDowell said the measure had the backing of Taoiseach Enda Kenny and the Government while Ms Higgins stressed the need to extend the remit of the Seanad across a range of interest groups.

Mr McDowell added that the costs of facilitating them should be no more than the current cost of NUI Seanad elections.

He said people would have to buy their passports and register themselves to vote.

Ms Higgins said there are mechanisms set out in the bill to expand the franchise and that it reflects the public's mandate when they voted to keep the Seanad and to be part of and engage with it.

Michael McDowell was asked if he'd rule out a run for the Dail, he said he was focusing on the Seanad today #rtenews pic.twitter.com/vVZal4laFT

Meanwhile, Sinn Féin has a motion calling for a special committee to swiftly come up with recommendations to reform the House.

The party wants the committee to be established within the next two weeks and to report four weeks after that with firm proposals.

The Seanad meets today amid indications of a deal between Fine Gael and Fianna Fáil that would allow what little legislation is in the pipeline proceed.

Lawless says Chicago commute will not be an issue

Senator Billy Lawless, who lives in Chicago, has told RTÉ it will not be difficult for him to attend the House.

Mr Lawless said he is semi-retired and his brief is Irish emigrants in the United States, the undocumented and the diaspora.

He said he is confident that he can represent the Irish abroad.

He added that it is historic as he is the first Senator living abroad.