The Minister for Health has moved to reassure cystic fibrosis patients after the HSE was advised not to fund a drug that could benefit many people living with the condition.

The National Centre for Pharmacoeconomics said that the drug, Orkambi, is too expensive and should not be paid for by the Health Service Executive.

Orkambi which targets the cause of cystic fibrosis, is made by Vertex Pharmaceuticals and costs around €158,000 per patient annually.

Minister Simon Harris said cost negotiations with Vertex Pharmaceuticals would be completed "as a priority".

He also said those currently on trials of the drug would continue to receive it during those negotiations.

Mr Harris said his views on the matter were conveyed to the HSE today.

Earlier, the Clinical Director of the NCPE said Vertex is willing to negotiate on the price.

Professor Michael Barry said the manufacturer of the drug has "got the price wrong".

However, Prof Barry said Vertex has said it is willing to negotiate on price and negotiations will be entered into.

Speaking on RTÉ's Morning Ireland, he said he would be hopeful a reduction in price can be reached and deals have been reached with the manufacturer in the past with the cystic fibrosis drug Kalydeco.

Prof Barry said currently they do not have the long-term proof that Orkambi prolongs life.

He said that clinical trial evidence shows that the drug helps with a modest improvement in breathing tests along with a reduction in hospitalisation and reduction in consumption of  antibiotics.

But he said they have to weigh the benefits against the cost.

Providing the drug to all cystic fibrosis patients would, he said, cost almost €400m over five years - almost two- thirds of the cost of the new National Children's Hospital.

He said the cost is not about putting a price on life but is about added health benefits.

"We don't put a price on life. What we do is we put a price on the added health benefits. That's what we're doing. We're not putting a price on life. And simply when you look at the benefits in association with the cost it doesn't come anywhere near the sort of levels that we have agreed with the pharmaceutical industry in this State."

Earlier Chief Executive of Cystic Fibrosis Ireland Philip Watt said he is very disappointed by the NCPE's decision not to fund the drug.

The NCPE said the price would have to be lower than €30,000 a year, per patient, to be cost-effective.

Mr Watt said Orkambi has proven to be an innovative and very effective drug and is more important in Ireland than anywhere because more than 50% of the cystic fibrosis population here would benefit from it.

He said that he believed the drug company could significantly drop its price.

"We really hope that they would enter into negotiations with the drug company as soon as possible so that the drug company does reduce its price and, at the end of the day, we can get this product for our patients."

He acknowledged that the drug does cost a lot but he pointed out that it means fewer hospital stays for cystic fibrosis patients.

He added that while the drug has a short-term cost, it could result in long-term savings.

Jillian McNulty, who has cystic fibrosis, said Orkambi has "transformed" her life and reduced her hospital admissions.

She said Orkambi means people with cystic fibrosis using it "can live a normal life, or as near a normal life, as possible" and it leaves her more able to do things.

She said the drug is "without doubt" a life-saving medication and without it she may not be here.

Ms McNulty has been taking the drug for three years.

Campaigner Orla Tinsley said the decision not to fund the provision of Orkambi is "incredibly disappointing".

Speaking to RTÉ's Sean O'Rourke, Ms Tinsley said the cost of the drugs are "astronomically high" and the price needs to reduced.

She said the short-term cost will have long-term savings in terms of the costs of treating exacerbations experienced by cystic fibrosis patients.

She said her use of the drug has made it possible for her to keep up with life and have enough energy to attend university in the United States.

Ms Tinsley said the quality of life from the drug cannot be underestimated.

Important drug companies do not hold people to ransom

Tánaiste Frances Fitzgerald has told the Dáil that "it's important that drug companies do not hold people to ransom."

She was responding to a question from Fianna Fáil leader Mícheál Martin during this morning's Order of Business about the supply of Orkambi.

He said people like Ms McNulty should be facilitated and the negotiations should be intensified on all sides and he stressed the need for a new Patient Advocacy Service.

In response, Ms Fitzgerald said "it is critical that drug companies do not hold people to ransom. Dr Barry made it clear this morning that he felt that t he manufacturers of Orkambi have got it wrong when it comes to pricing."

She said Minister for Health Simon Harris is very conscious of the issue and he is working hard to ensure that progress can be made in terms of the supply of Orkambi. 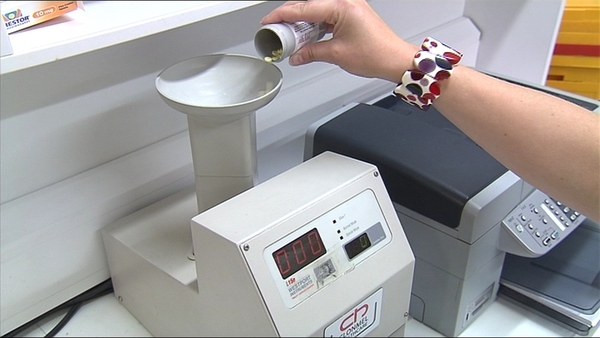