German Chancellor Angela Merkel and French President Francois Hollande together marked the 100-year anniversary of the Battle of Verdun today, laying a wreath at a cemetery in north-eastern France for the 300,000 soldiers killed.

The Verdun battle was one of the longest in World War I, lasting more than 300 days from February to December 1916.

Today's commemorations at Verdun took place in the rain, and Mr Hollande held an umbrella for Ms Merkel and himself as they made their way to the German cemetery Consenvoy to lay a wreath.

"We are side by side to tackle the challenges of today and first of all the future of Europe, because, as we know disappointment was followed by disenchantment, and after doubts came suspicion, and for some even rejection or break-up," Mr Hollande said in a closing speech at the ceremony.

The battle's commemoration has come to signify the close relationship between Germany and France. It was not until 1984 that the neighbours carried out a joint ceremony to mark the Verdun battle, another step towards ending decades of residual hostility and distrust after two World Wars.

A photo of then French President Francois Mitterand and then German Chancellor Helmut Kohl holding hands in the Douaumont cemetery at Verdun became a symbol of Franco-German reconciliation. 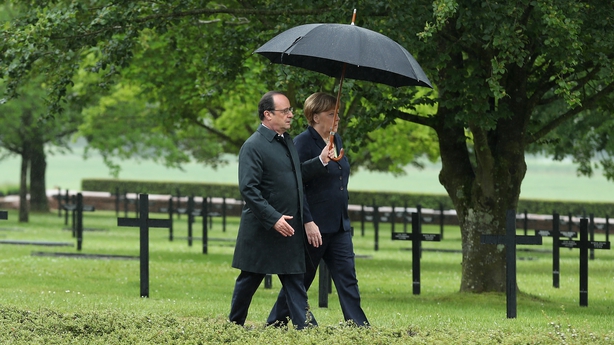