Donald Trump brought his message of walls and deportations to the doorstep of America's busiest border crossing yesterday as the presumptive Republican presidential nominee greeted supporters in San Diego, amid one of the largest counter-protests organised against him.

The scene inside the San Diego Convention Center during Mr Trump's speech was relatively placid, while outside demonstrators opposed to his controversy-ridden White House bid marched and chanted, carrying signs criticising his rhetoric against illegal immigration. 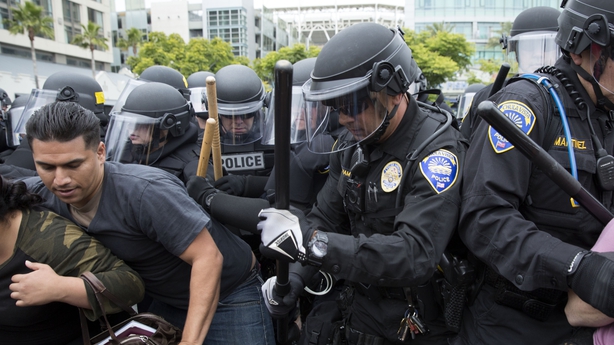 Waving US and Mexican flags, more than 1,000 people turned out for anti-trump rallies in San Diego, a city on the US-Mexico border whose San Ysidro port of entry sees nearly 300,000 people a day cross legally between the countries. 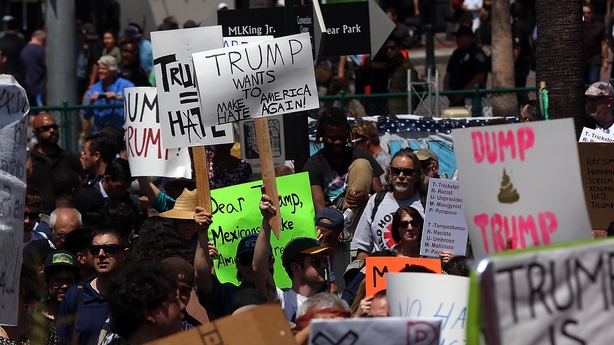 San Diego is considered a bi-national city by many who live and work on opposite sides of the border, and about a third of the city's population is Latino.

During Mr Trump's speech yesterday, some protestors outside the convention centre scaled a barrier and lobbed water bottles at police.

One man was pulled off the wall and arrested as others were surrounded by fellow protestors and backed away from the confrontation.

After the convention centre emptied, clusters of Trump supporters and anti-Trump demonstrators began to mix in the streets, many exchanging shouted epithets and some throwing water bottles at one another.

Police in riot gear declared the gathering an unlawful assembly and ordered the crowd to disperse, herding the crowd out of the city's hotel and restaurant-filled Gaslamp Quarter.

San Diego police said on Twitter that 35 arrests were made during the protest. No property damage or injuries were reported, police said.

Mr Trump has weathered months of criticism from all ends of the political spectrum for his immigration policy, which calls for the building of a wall along the US-Mexico border and deporting the nearly 11 million undocumented immigrants who live in the United States. 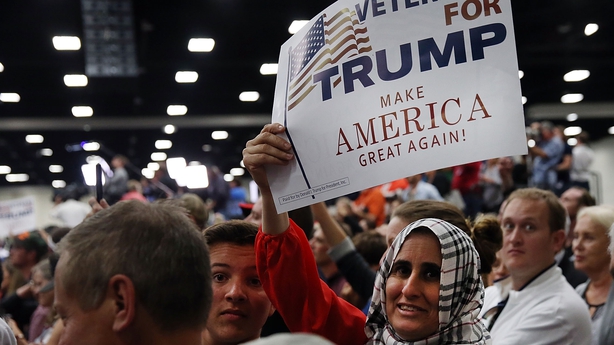 Critics have said his plan is needlessly cruel and impossible to implement. At Trump's campaign stops, attendees often chant "build the wall."

While Trump is running unopposed in the 7 June California Republican primary, his stance on border control and deportation seems unlikely to resonate with the electorate at large in a state where political fallout from a Republican-backed crackdown on illegal immigrants 20 years ago cost the party dearly.

Yesterday was not the first time Trump has been greeted by civil unrest in California, which is home to the largest Latino population in the country. Late last month, a visit to the California Republican convention set off days of protests in the area, leading to several arrests.

Meanwhile, Democratic contender Bernie Sanders is trailing Hillary Clinton in the race to secure their party's nomination, but opinion polls show he is slicing into her lead in California.

Mrs Clinton has shown no interest in debating Mr Sanders before the California primary, which will be part of a final slate of nominating contests. It is possible she will clinch the nomination by winning New Jersey earlier that day, making the outcome in California superfluous.

The former US secretary of state has said she is looking forward to debating Mr Trump later this year ahead of the 8 November general election. 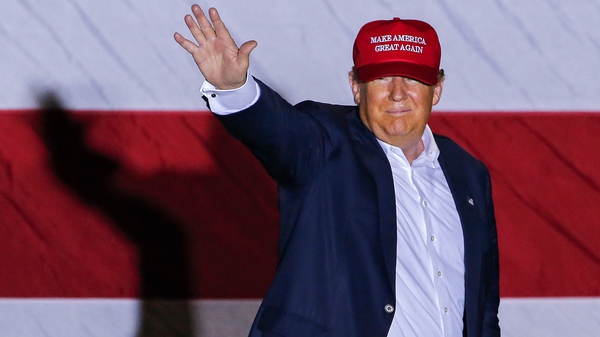 Trump says he has enough delegates to secure nomination News