A timeline of the main developments since an EgyptAir flight from Paris to Cairo crashed into the sea on Thursday with 66 people aboard.

A tweet on the airline's official account says the plane had left Paris at 11.09pm local time (2109 GMT), "heading to Cairo (and) has disappeared from radar".

Shortly afterwards the company says that 66 people, including 56 passengers, were on board.

It says the aircraft had entered Egyptian airspace when it vanished.

An EGYPTAIR official declared that EGYPTAIR A320 aircraft in its flight number MS804 lost contact with radar above the Mediterranean Sea.

Shortly before 0500 GMT EgyptAir's Vice President Ahmed Adel says that radar contact had been lost when the aircraft was 48-64km from Egypt's northern coast. He said the control tower had not received a distress signal.

0506 GMT: The Egyptian military deploys search aircraft and naval vessels to locate the plane. Greece is also participating in the search for the Airbus A320, it says.

0536 GMT: The plane was carrying 30 Egyptian and 15 French passengers, as well as a Briton and a Canadian, EgyptAir says. An Algerian, a Belgian, a Chadian, two Iraqis, a Kuwaiti, a Portuguese, a Saudi and a Sudanese were also on board. 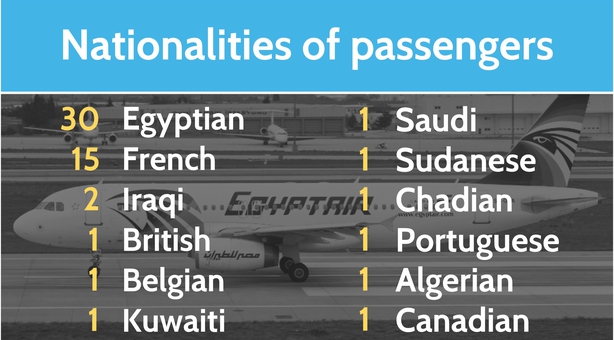 0545 GMT: The French and Egyptian presidents, Francois Hollande and Abdel Fattah al-Sisi, agree to cooperate closely to establish as soon as possible the circumstances behind the plane's disappearance.

0626 GMT: A former director of France's air accident investigation authority BEA, Jean-Paul Troadec, says the fact that the plane sent no distress signal was a pointer to a "brutal event" which "leads us to think of an attack".

0630 GMT: Mr Hollande gathers his top ministers for a crisis meeting. Shortly afterwards Foreign Minister Jean-Marc Ayrault says a crisis cell is being set up at his ministry.

0715 GMT: The Egyptian army denies it detected any "distress messages" from the flight, contradicting a statement from EgyptAir which had said it was informed by the military that it detected one.

0743 GMT: The plane crashed into the sea off the southern Greek island of Karpathos, situated between Rhodes and Crete, while in Egyptian airspace, a Greece aviation source says.

0930 GMT: Some relatives of the victims are seen arriving at the emergency centre at Charles de Gaulle, Paris's main airport.

1000 GMT: The pilot had "not mentioned a problem" in his final contact, the Greek civil aviation says.

1024 GMT: Mr Hollande says "no hypothesis is ruled out or favoured". The Paris prosecutor opens a probe.

1200 GMT: Egypt's aviation minister Sherif Fathy says he cannot rule out that an attack or a technical failure brought down the flight.

1311 GMT: Egypt's aviation minister Fathy says that a "terror" attack was a more probable explanation for the disappearance of the flight than technical failure. 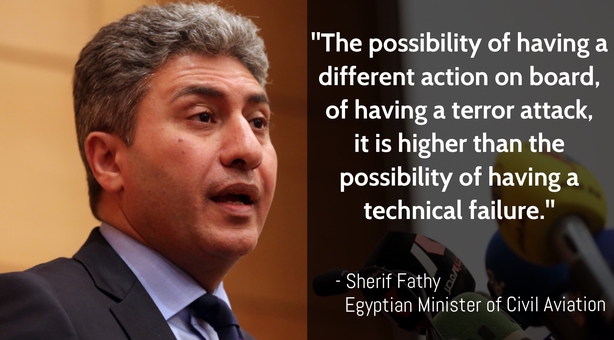