The move would represent a major shift in US foreign policy.

He also called for a renegotiation of the Paris climate accord and said he disapproved of Russian President Vladimir Putin's actions in eastern Ukraine.

The presumptive Republican nominee declined to share details of his plans to deal with North Korea, but said he was open to talking to its leader.

North Korea's mission to the United Nations did not immediately respond to a request for comment on Mr Trump's remarks.

Mr Trump also said he would press China, Pyongyang's only major diplomatic and economic supporter, to help find a solution.

"I would put a lot of pressure on China because economically we have tremendous power over China," he said in an interview with Reuters.

"China can solve that problem with one meeting or one phone call."

His preparedness to talk directly with Mr Kim contrasts with President Barack Obama's policy of relying on senior US officials to talk to senior North Korean officials.

An adviser to Hillary Clinton criticised Mr Trump's foreign policy comments, noting they came soon after Mr Trump said he was unlikely to have a good relationship with British Prime Minister David Cameron.

"Let me get this straight: Donald Trump insults the leader of our closest ally, then turns around and says he'd love to talk to Kim Jong Un?" Mrs Clinton's senior foreign policy adviser, Jake Sullivan, said in a statement.

Mr Trump "seems to have a bizarre fascination with foreign strongmen like Putin and Kim. But his approach to foreign policy makes no sense for the rest of us," he said.

Mr Trump said he thought Mr Cameron's criticism of him was inappropriate but "I'm sure I'll have a good relationship with him".

He also said he is "not a big fan" of the Paris climate accord, which prescribes reductions in carbon emissions by more than 170 countries. He said he would want to renegotiate the deal because it treats the United States unfairly and gives favourable treatment to countries like China.

Mr Trump has been criticised for offering far fewer specific policy proposals than Mrs Clinton, his likely rival for the 8 November presidential election.

The New York billionaire said he planned to release a detailed policy platform in two weeks that would propose dismantling nearly all of Dodd-Frank, a package of financial reforms put in place after the 2007-2009 financial crisis.

"Dodd-Frank is a very negative force, which has developed a very bad name," he said.

He took a dim view of Mrs Clinton's stated desire to put her husband, former president Bill Clinton, in charge of building up the US economy.

"The wife wants to make him in charge of the economy," he said. 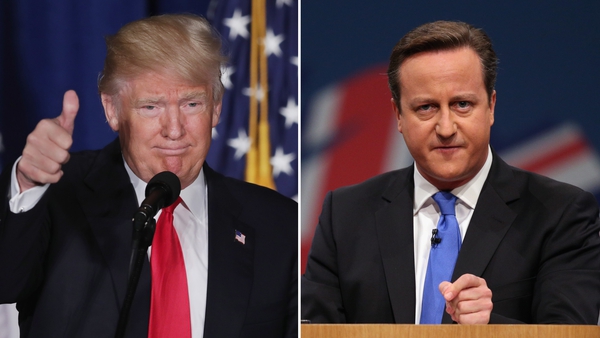