Voters in the UK go to the polls on 23 June to decide whether or not Britain stays in the European Union.

The referendum is being hailed as one of the most important political decisions in a generation.

What will the people be asked?

How did the referendum come about?

This won't be the first such referendum in the UK. In 1975, just two years after joining the then EEC, voters went to the polls in a referendum on continued membership; 67% of the electorate voted then to remain in the EEC.

As the EEC became the EC and then the EU, it stoked fears about an erosion of British sovereignty.

Membership is an issue that has particularly vexed the Conservatives, with many party members deeply sceptical of the EU's increasing powers.

Disagreement and division eventually led to a declaration in September 2013 from David Cameron: "We will give the British people a referendum with a very simple In or Out choice".

British Prime Minister David Cameron is leading the campaign to stay in the EU, while former mayor of London Boris Johnson is the main protagonist in the leave camp.

British Labour Party leader Jeremy Corbyn, who had been accused by many in his party of showing only lukewarm support for the remain side, last month said that "a vote to stay in is in the best interests of the people of this country".

UKIP leader Nigel Farage has said: "This is a once in a lifetime opportunity to get back the independence and self-government of this nation."

What are the main issues in the campaign?

Sovereignty and economics remain key issues in the upcoming vote but migration is also a major concern for many.

What is the potential economic impact of a Brexit?

Some believe maintaining the EU link is vital, but others think the EU's ironclad rules are not good for business.

Brexit: A look at the economic impact of the referendum

What is the feeling on the ground?

RTÉ's Stephen Murphy has been travelling around Britain for RTÉ's Morning Ireland to gauge the mood of the people ahead of the crucial vote. Click here

After the British prime minister notifies the European Council that Britain plans to withdraw, negotiations would begin on the arrangements for leaving and for Britain's future dealings with the remaining 27 member states.

Greenland left the EU's predecessor, the EEC, in 1985 after a referendum three years earlier. After leaving the bloc, the Danish territory continued to receive EU funding and have tariff-free access to the market for fisheries products in return for allowing the EU fishing rights over its waters.

Most commentators argue there is little to read across from the example of Greenland as it was not a member state in its own right, but joined as part of Denmark, and has a much smaller population of just 57,000.

Given there are around 2 million Britons living abroad within the EU, and 2.5 million EU citizens living in Britain, one element of the Greenland deal which may be copied however are its transitional arrangements.

Greenland's deal allowed for EU migrants who had acquired rights under EU law, such as free movement, to retain those rights for a transitional period.

Switzerland, along with Norway, Iceland and Liechtenstein, is a member of the European Free Trade Association (EFTA). Its goods exporters enjoy tariff-free access to EU markets, while it is also free to negotiate its own trade deals with non-EU countries. It has a free trade deal with China for example, whereas the EU does not.

It has only limited access to the EU's services market however, and almost none for financial services - a significant contributor to the British economy.

While Switzerland has freedom over its own social and employment policies, something many in Britain would like, it also pays contributions to the EU budget and accepts free movement of people - two elements of EU membership "out" campaigners want to get away from.

Switzerland experiences far higher levels of net EU migration per head of its population than Britain. In a February 2014 referendum it voted to introduce quotas on EU migrants from 2017, something that would violate its bilateral pact guaranteeing free movement.

The EU has so far refused to agree to this curb and has threatened to suspend all other EU-Swiss agreements and market access if Switzerland imposes the quotas unilaterally.

As well as being a part of EFTA, Norway has access to the EU's single market by being a member of the European Economic Area. In return, it accepts freedom of movement of EU citizens, pays contributions to the EU budgets and applies the single market's rules and regulations without having a vote on them.

Mr Cameron has said Norway, which twice rejected EU membership in referendums, is not a model to emulate. It pays twice as much per head to the EU as Britain, takes twice as many migrants but has no "seat at the table", he said.

Under the Norway model, most EU policy areas would continue to apply to Britain, in particular many of the employment laws often cited by businesses as overly restrictive.

Like Switzerland, Norway has the freedom to negotiate its own free trade agreements with non-EU countries. It is also not subject to the European Court of Justice, whose power many British "outers" are unhappy with.

Turkey, which is a candidate country to join the EU, has a customs union agreement with the bloc. The deal means it does not face tariffs to export most goods into the EU, and accepts the EU's external tariffs when trading with non-EU countries. It does not have any say in setting these tariffs however. The agreement also does not cover services markets.

Campaigners for "out" favour Britain agreeing a free trade deal with the EU, similar to that the bloc has just reached with Canada, which removed 99% of customs duties.

They say this would allow Britain to trade with the EU largely as before, while also leaving it free to agree trade deals directly with other countries such as the US, its biggest individual export partner, and emerging markets.

"Out" campaigners argue that as Britain has a trade goods deficit with the EU - £7.6 billion in December 2015 - the bloc could not afford to cut it off.

"We are too valuable a market for Europe to shut off. Within minutes of a vote for Brexit, the CEO's of Mercedes, BMW, VW and Audi will be knocking down Chancellor Angela Merkel's door demanding that there be no barriers to German access to the British market," Conservative lawmaker David Davis said.

"The first few months after Brexit will probably be hysterical, but the leaders of France, Germany, Spain, Italy, Poland and the rest know that the way to lose elections is to destroy your own industries," said Davis, who is backing "out".

On the other hand, leaders determined to discourage others following the British example and breaking up the EU, could choose to make Brexit as painful as possible for Britain, EU officials and diplomats say.

The "in" camp also point out these deals take far longer than two years to agree - the Canadian agreement will have taken seven years by the time it is expected to come into force - and argue Britain outside the EU would not have the same clout in negotiating trade deals with the rest of the world.

Getting rid of barriers to trade in services, the dominant sector in Britain's economy, is also likely to be harder. Those backing "out" argue those barriers already exist within the EU.

If Britain is unable to agree a free trade deal with the EU, it could fall back on WTO rules - described by some in the "out" camp as a "Brexit safety net" - which set upper limits on tariffs countries can impose.

This would give Britain low or zero tariffs on many of its exports to the EU, though tariffs in some key sectors such as cars, chemicals and food would remain relatively high.

Britain would also face barriers on services, particularly in highly regulated sectors such as financial services.

Under both a free trade agreement and WTO terms, Britain would not have to accept free movement.

Will they stay or will they go? 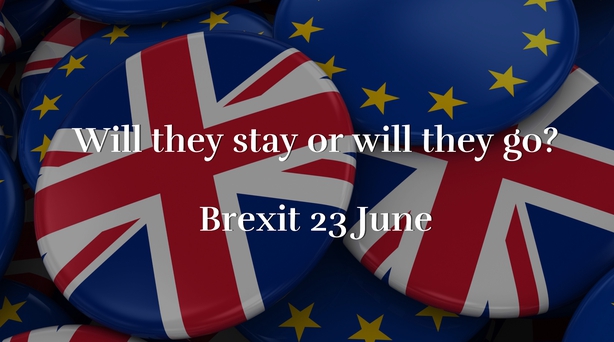 Voters go to the polls on 23 June.

The votes will be counted by hand with the count beginning as soon as polls close.

A final result will be announced in Manchester by the Chief Counting Officer.