Independent TD Clare Daly has told Minister for Justice Frances Fitzgerald that it is time for Garda Commissioner Nóirín O'Sullivan to go and warned that unless the minister acts "she's going to take you with her".

Speaking in the Dáil, Ms Daly asked Minister Fitzgerald if she was going to launch a full investigation into the commissioner.

"Are you going to commission GSOC to launch an investigation, and if not why not?"

Meanwhile, Independent TD Mick Wallace said Ms O'Sullivan is not fit to be the garda commissioner. Also speaking in the Dáil, Mr Wallace told to Ms Fitzgerald: "Nothing has changed ... You're not going to change how you do policing in Ireland until you change the hierarchy."

In her Dáil speech, Ms Fitzgerald said she was legally constrained in what she could say about proceedings at the commission.

She said: "I believe our focus now should be on taking all the steps necessary to ensure that does not happen again and that we have a policing service that serves all the citizens of this country to the highest standards.

"I have had preliminary discussions with the Garda Commissioner about taking forward the recommendations about policing contained in the report, and I have every confidence in her commitment to take these forward."

It follows a statement released by Ms O’Sullivan last night where she apologised to the victims of the crimes examined by the O’Higgins Commission and acknowledged they did not get the service they were entitled to.

The commissioner also reiterated that she could not, by law, discuss the proceedings before the commission but this has been rejected by opposition politicians.

Earlier, further details emerged of the exchanges at the O'Higgins Commission about the motivation of garda whistleblower Sergeant Maurice McCabe.

The O’Higgins Commission of Investigation, set-up on the back of concerns raised by Sgt McCabe, last week highlighted serious flaws and failures in criminal investigations in the Cavan-Monaghan division in 2007 and 2008.

It, however, found no evidence of garda criminality or corruption.

The current controversy began when it was reported that the legal team of Commissioner O’Sullivan was going to claim that Sgt McCabe was motivated by malice.

This was in marked contrast to the commissioner's public statements of support for the garda whistleblower.

Documents seen by RTÉ News show senior counsel acting for Commissioner O'Sullivan told the O'Higgins inquiry that it was an "error on his part" when he said his instructions were to question the integrity of Sgt McCabe, but that he would be challenging his motivation and credibility.

The documents relate to a hearing months after the allegation of malice was reported to have been made and show Ms O'Sullivan's legal team appearing to deny introducing the word to the proceedings.

The judge put the issue to one side on that occasion but later in the proceedings, just before Ms O’Sullivan was to give evidence, sought clarification on the issue.

Senior Counsel Colm Smyth told the judge that his instructions at all times were to challenge the motivation and credibility of Sgt McCabe "in relation to the corruption and malpractice allegations."

He told the judge that Sgt McCabe had "alleged corruption on the grand scale" against five senior officers including former commissioner Martin Callinan and "he was invited to withdraw" the allegations against Mr Callinan but "he refused to do so".

The Commission found there was no evidence to substantiate any of the allegations of corruption Sgt McCabe made against any of the offices.

He also said "it was an error on my part" when he said earlier he was to challenge Sgt McCabe's "integrity".

Mr Smyth also pointed out that the Garda Commissioner had a duty of care to all gardaí.

"I never used the words 'mala fides'," he said, those were the words that in the first instance came from Mr McDowell (Sgt McCabe's legal representative) and they were introduced by yourself in interpreting what my instructions were."

The position was further clarified by the commission's Senior Counsel Sean Gillane who said there was "no case being made that Sgt McCabe either lacks integrity or acted mala fides in bringing his complaints."

The judge accepted that this had clarified the position and Commissioner O'Sullivan was then called to give her evidence.

Minister Fitzgerald was asked on RTÉ's Prime Time to comment on the contents of the transcripts that have now been made public but she was adamant that she could not comment as "it's illegal to publish these transcripts".

The latest fallout from the O'Higgins report

She said that "it's undermining of the overall commission report when we select certain transcripts..."

She said she has to accept fully the findings in the O'Higgins report and she was critical that media attention was not being paid to the report itself but rather to details that were not actually included in it.

Ms Fitzgerald said she did have confidence in the Garda Commissioner in how she was doing the job regarding modernising and reforming and dealing with changes in the report. 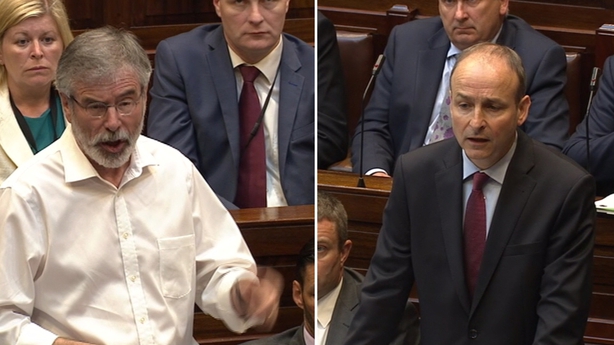 The Dáil this afternoon heard claims that there had been a campaign to undermine the credibility of Sgt McCabe.

Sinn Féin President Gerry Adams claimed there was a pattern where whistleblowers were smeared and their supporters ridiculed.

Speaking during the first Leaders' Questions since the formation of the new Government, Fianna Fáil leader Micheál Martin said there had been a campaign to undermine the credibility of Sgt McCabe.

Mr Martin said the 'malice' allegations, first raised in the Irish Examiner, cut to the heart of how whistleblowers were treated.

Tánaiste Frances Fitzgerald, standing in for the Taoiseach, said that Ms O’Sullivan fully accepted the report.

She added that it was unfortunate that some material had been leaked and that the report would be debated by the Dáil.

Former tánaiste Joan Burton has called on Ms O'Sullivan to clarify her instructions to her lawyers.

The commissioner has issued two statements; the first last Friday saying she was legally precluded from commenting on evidence before the commission and the second last night reiterating this point and stating she does not and never has regarded Sgt McCabe as malicious.

This evening, Mr Adams said the former minister for justice Alan Shatter "was embroiled in a series of scandals when the two garda whistleblowers, John Wilson and Maurice McCabe, raised concerns regarding practices within the upper echelons of An Garda Síochaná.

"The whistleblowers were smeared and bullied, as were teachtaí who raised these concerns in this chamber," Mr Adams told the Dáíl.

Earlier, Ms Fitzgerald told Brendan Howlin that Taoiseach Enda Kenny would be giving a detailed response to the objections raised by Alan Shatter to aspects of an earlier report - the Guerin Report - which prompted his resignation.

The Policing Authority said its members are reviewing the report of the O'Higgins Commission and it is due to be discussed at their meeting next Thursday.

A spokesperson for the Commission said the chairperson was not available for interview and there were no plans to issue a statement today. 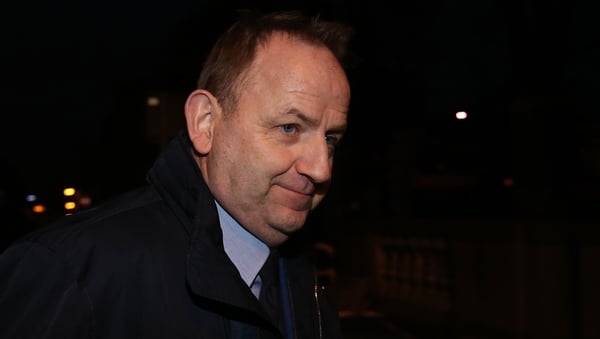