The Taoiseach has said that there will be rows between Fianna Fáil and Fine Gael but that the parties have an agreement and that Fine Gael will honour that.

He said the party was in "real listening mode" at Fine Gael's post-election meeting in Athlone today and that the general mood of the meeting had been very upbeat.

Mr Kenny said there were concerns about party structures and how it listens to elected representatives and supporters but that changes could be made in these areas.

He added that the convention was one of a series over the coming years where the party would look at how they could do things better.

Speaking at Fine Gael's first gathering since the General Election, the Tánaiste Frances Fitzgerald said that undermining the Government from the word go was not helpful.

Ms Fitzgerald said the first minority government would require a lot of learning but undermining statements were not the way to go because the country needs stability.

She was responding to reports that Fianna Fáil are planning to veto key aspects of the Programme for Government including Fine Gael’s plans to cut the USC.

Speaking as she arrived for Fine Gael's post-election meeting in Athlone earlier, Ms Fitzgerald said she expected the atmosphere at the meeting to be mixed "it'll be interesting, it won't be boring".

Reservations about Fianna Fàils support for a minority govt expressed by some FG members at their Athlone thinkin pic.twitter.com/my0ML8P3Ff

Other Fine Gael members have also expressed concerns about Fianna Fáil’s support for the minority government.

He said that Fine Gael should continue to do the right thing by the country and that if Fianna Fáil wanted to play games the electorate would judge them for that.

Newly appointed Senator Jerry Buttimer said it would be unacceptable for Fianna Fáil to "go back to their old ways". He said new politics is about dialogue and not about Fianna Fáil setting out what they think is the way forward.

Independent Denis Naughten, who arrived at the same venue to meet the Irish PostMasters Union in his capacity as Minister for Communications, said if Fianna Fáil took this approach we would be back on the doorsteps within weeks and it would be up to them to explain to the public why they weren't prepared to give this Government an opportunity to work.

In a statement released this evening, Fine Gael said that: "The Chairperson of the Fine Gael Executive Council, Gerry O'Connell, welcomed a resolution passed at the party's national consultative conference in Athlone today affirming the party's participation in Government, on the basis of the Programme for Government."

Commenting on the resolution, Mr O'Connell said: "The agenda was framed in order to provide the party membership with an unprecedented level of briefing, information and consultation in respect both of government formation and the new political reality the party faces."

The conference was attended by 500 delegates and heard speeches from Enda Kenny, Frances Fitzgerald, Simon Coveney and Richard Bruton. 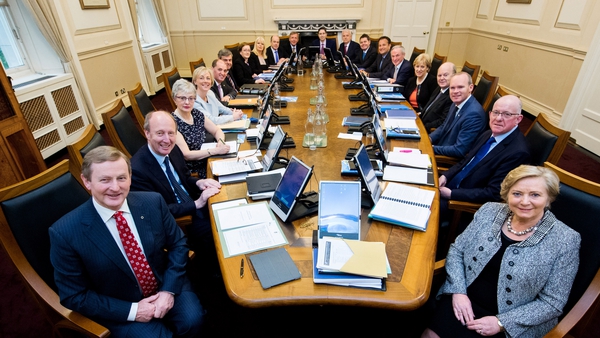 Poll: 52% surveyed do not have confidence in Government