Independent TDs were given a draft programme for government this afternoon which commits to spending at least €6.75 billion more on public services by 2021, compared to 2016.

The document also proposes to increase the State pension and the living alone allowance.

A public pay commission is to be established and personal taxes, including the USC, are to be reduced.

The document also proposes to establish a dedicated new court to handle mortgage arrears and other personal solvency cases.

The new government would immediately proceed to the design and planning stage for a dedicated Cystic Fibrosis Unit at Dublin’s Beaumont hospital - a key demand of Dublin Bay North Independent Finian McGrath.

The draft programme also contains a commitment to a second cardiac care facility at University Hospital Waterford, subject to a favourable clinical assessment. 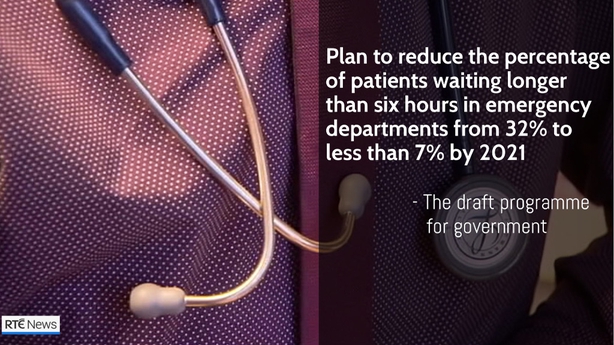 The review would proceed within six weeks and the project would proceed immediately if there was a favourable recommendation, which was a key demand of Waterford TD John Halligan.

Mr Halligan said the issue of cardiac care will be resolved, but he needed to check with consultants in the hospital before he signs off on the programme.

Earlier, Mr Halligan was critical of the leaking of the draft programme to the media.

He said it was "outrageous and unprofessional" and no way to do business.

He said he and others still want to return to their constituencies to consult with their people about the deal and that he did not care if he was not in the Dáil for a vote tomorrow as a result.

The draft programme for government runs to 160 pages.

Dáil to vote on electing a taoiseach tomorrow

It proposes to establish a dedicated new court to handle mortgage arrears and other personal solvency cases.

As previously reported it proposes a new minister for housing. 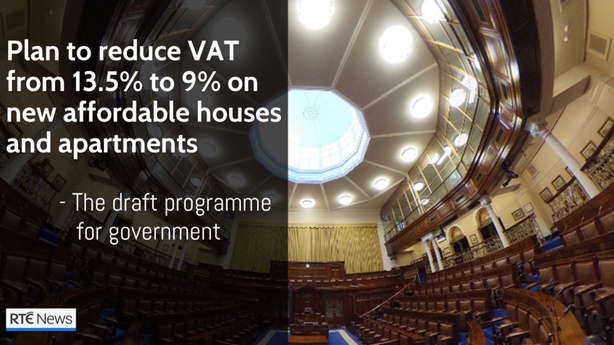 Many of the recommendations regarding housing are well known including reducing VAT from 13.5% to 9% on new affordable houses and apartments.

There will be greater protection also for mortgage holders, tenants and SMEs whose loans are transferred to vulture funds.

The Central Bank and government will work on a help-to-buy scheme for first time buyers.

The document commits to spending at least €6.75 billion more on public services by 2021 compared to 2016, to cover the cost of an ageing and growing population, targeted welfare payments and public sector pay rises.

It proposes to reduce the percentage of patients waiting longer than six hours in emergency departments from 32% to less than 7% by 2021 and proposes increases to various payments for those with disabilities.

It proposes increasing GP training places by 100 over the next five years; tax incentives for the primary care sector  and undertaking a national bed capacity review as part of an initiative to tackle hospital overcrowding. 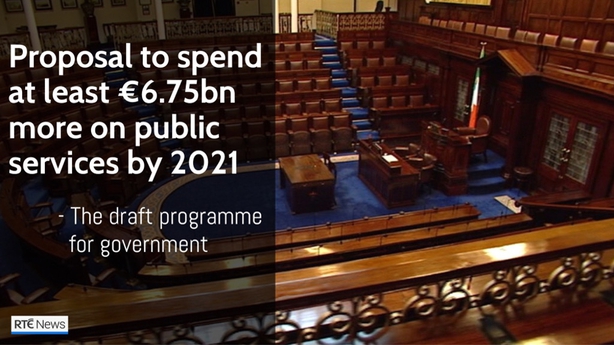 Lifting the lid on draft programme for government

The new government would immediately proceed to the design and planning stage for a dedicated Cystic Fibrosis Unit at Dublin’s Beaumont hospital and the draft programme also contains a commitment to a second cardiac cath facility at University Hospital Waterford subject to a favourable clinical assessment.

It proposes to increase the State pension and the living alone allowance above the rate of inflation and introducing an annual cap on the drugs payment scheme and reducing prescription charge for medical card holders. 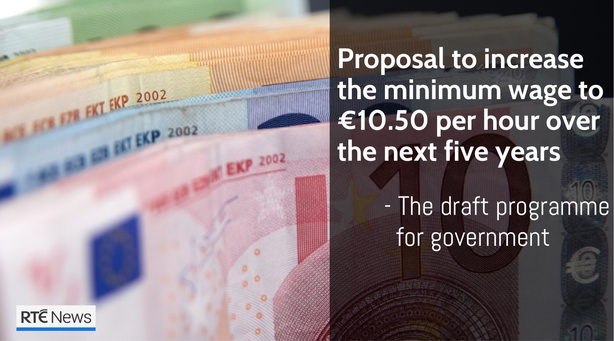 It proposes not selling more than 25% of any bank by the end of 2018 and ceasing to appoint new public interest directors and reform appointment process of bank directors.

It calls for an independent assessment of the arrears and negative equity loan book of banks.

A public pay commission will be established to look at pay across the public service, including entry levels.

It proposes reductions in personal taxes, including USC, which will be paid by measures including a new tax on sugar sweetened drinks and increases in the price of cigarettes and removal of PAYE tax credit for high earners as well as the recruitment of more front-line staff.

It proposes increasing the minimum wage to €10.50 per hour over the next five years and to rely on annual recommendations of the low pay commission on the level of adjustment each year. 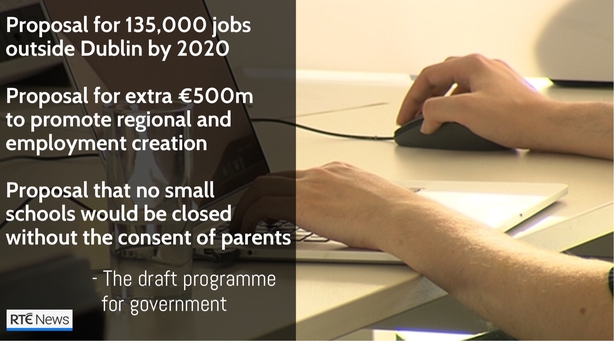 The draft programme envisages 135,000 jobs outside Dublin by 2020,  a new cabinet level minister of Regional Development or Rural Affairs and an extra €500m to promote regional employment creation.

There would be a new Town and Village renewal scheme in time for Budget 2017 with a view to revitalising communities outside the capital and additional funding for regional airports.

On broadband, all the agencies currently involved in the sector would be consolidated into a single agency with a view to seeing 85% of premises having high speed connectivity within two years.

No small schools would be closed without the consent of parents

The recommendations of Bobby Kerr's review group of post offices would be implemented swiftly and a new model of community banking advanced.

There would be new legislation covering turf cutting.

The section of the programme covering agriculture proposes a change to the tax system to support farm incomes and land mobility.

It also pledges to tackle unfair prices in the grocery trade. 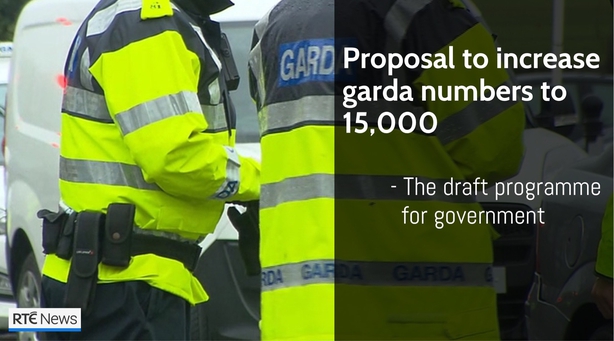 The draft programme for government proposes to increase Garda numbers to 15,000, invest in CCTV and mandate the Policing Authority to oversee a review of boundaries of Garda districts and the disbursement of Garda stations.

It aims to accelerate the Garda recruitment programme and double the Garda reserve as well as update infrastructure.

Responsibility for Criminal Legal aid will be transferred to the Legal Aid Board who will have powers to compel criminals to pay a contribution – and introduce a more rigorous means testing process for such applications.

It proposes to examine the feasibility of a new Public Defender System and report back to the Oireachtas on it within six months.

Regarding the Courts and Law Reforms an annual study on court efficiency and sitting times will be commissioned. 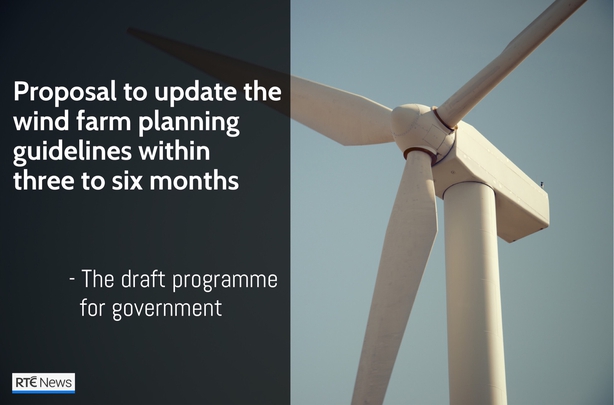 The draft programme says wind farm planning guidelines will be updated within three to six months to offer what it says is a "better balance between the concerns of local communities and the need to invest in indigenous energy projects".

It says it will establish a national dialogue on climate change that will involve extensive public consultation.

On flooding, the draft says Bord na Móna has a key role to play in preventing flooding on the Shannon.

It says the government will set-up a new national flood forecasting system and review protocols of the State to examine if a more rapid response to local incidents can be achieved.

An increase in non and multi-denominational schools to 400 nationwide by 2030 is among the draft education proposals in the document.

New legislation governing school admission is promised by the start of the 2017 school year, while it also contains proposals to introduce a coding course at Junior Cycle level and computer science as a Leaving Cert subject. 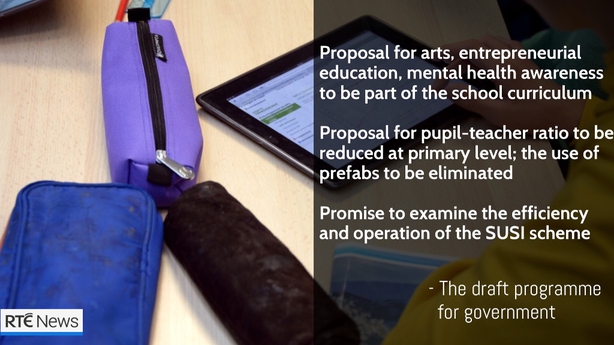 There will be a 25% increase in speech and language therapists and educational psychologists, while guidance counsellors will be reintroduced at second level

Overall, the programme commits to investing an extra €500m in education by 2021, which it says includes childcare subventions. 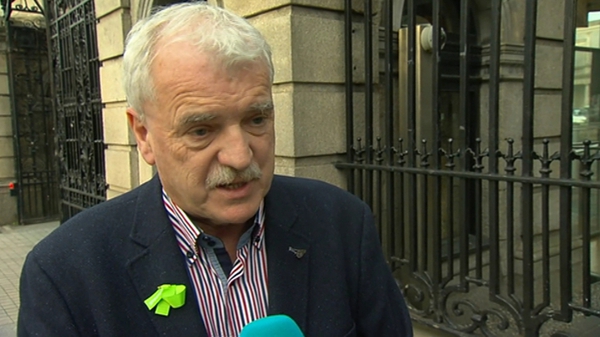