A massive wildfire that has forced all 88,000 people to flee the western Canadian oil city of Fort McMurray and burned down 1,600 structures is threatening its airport and communities south of the town, authorities said.

Firefighting crews have been unable to stop the wildfire, which has charred 18,500 acres since it erupted on Sunday.

Worsening fire conditions pushed walls of flames towards thousands of more homes in the northeastern Alberta town, in the heart of Canada's oil sands region.

Officials confirmed that a hotel north of the main terminal had caught fire. 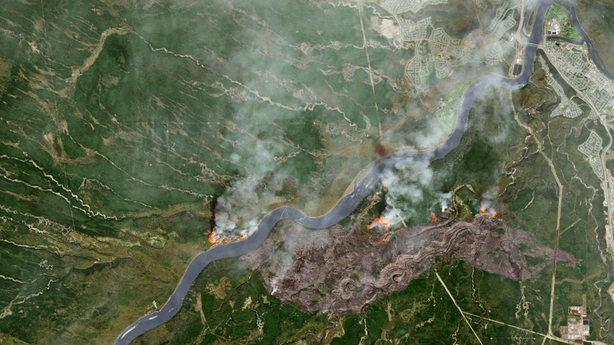 Officials on the scene were forced to evacuate their make-shift emergency operations centre for the second time in the span of less than a day as the flames spread south.

They said in a tweet that they were relocating to the town of Lac La Biche about 250km south of Anzac.

Authorities said there had been no known casualties from the blaze itself, but fatalities were reported in at least one car crash among the evacuees.

In pictures: The evacuation of Fort McMurray

A huge cloud of black smoke was visible from well over 60km away from the town.

Traffic on the main road headed south had thinned to a trickle, however, after major jams on Tuesday when the evacuation order was given.

Stretches of the highway had been converted into make-shift campgrounds by people in cars, trucks and recreation vehicles, who were fleeing the inferno.

The Department of Foreign Affairs has not received any requests for consular assistance in relation to Irish people affected by the wildfires.