A massive wildfire that has forced the evacuation of all 88,000 residents of a western Canadian city has the potential to destroy much of the town, authorities said.

Around 1,600 structures have already burned down.

Fort McMurray had been largely emptied of its residents by this afternoon, officials said, despite fuel shortages, traffic jams and a highway closed by the flames in the northeastern part of the province of Alberta, the heart of Canada's oil sands region.

So far there are no reports of fatalities, but crews had been unable to stop the wildfire, which has burned 18,500 acres (7,500 hectares) since it erupted on Sunday.

"It is a possibility that we may lose a large portion of the town," said Scott Long, an official with Alberta's emergency management agency.

Major oil sands facilities were not in the fire's path, but some companies' operations were disrupted by efforts to help employees and evacuees. 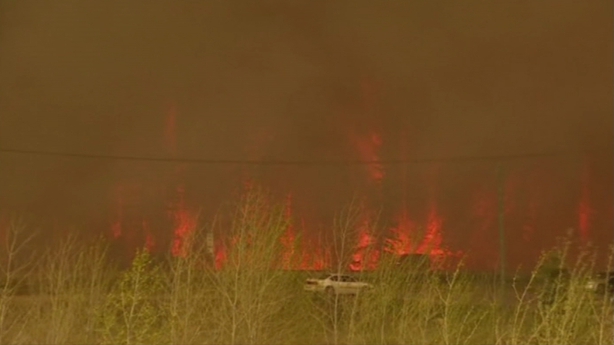 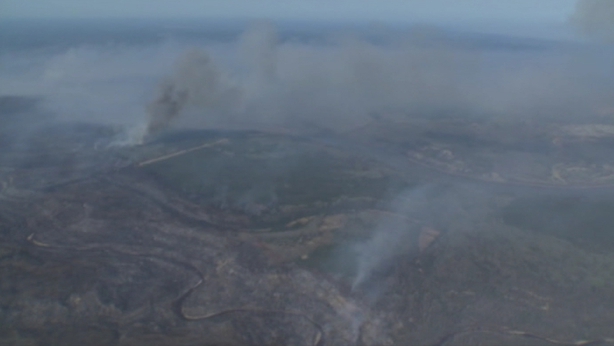 Images from the neighbourhood of Beacon Hill in the city's southeast showed rows of charred house foundations, their upper stories burned to the ground, and blankets of white ash within.

Officials said 80% of houses in the neighbourhood, nearly 600 in total, were destroyed.

Alberta Premier Rachel Notley said a total of about 1,600 structures have been destroyed in Fort McMurray.

"There are certainly areas within the city that have not been burned, but this fire will look for them and it will find them and it will want to take them. And our challenge today is to prevent," said Chief Darby Allen of the Fort McMurray fire department.

Fort McMurray International Airport said it was suspending all commercial flights in and out of the city.

It was the second major fire in the oil sands region in a year.

Last May, wildfires led to the evacuation of hundreds of workers from the region, and a 9% percent cut in Alberta's oil sands output.

Royal Dutch Shell PLC said one of its oil sands mines was closed and another was in the process of being shutdown.

Suncor Energy Inc, whose oil sands operations are closest to the city, said it was reducing crude production.

Mr Schmitte added that more resources are being assembled across Canada.

"The fire has resisted all suppression efforts," he said.

The Canadian Red Cross said evacuees were calling the organisation for help getting food and water.

The fire drew immediate comparisons to one that hit Slave Lake, Alberta in 2011, forcing 7,000 to evacuate and destroying more than 300 buildings.

Wildfires were also raging in neighbouring British Columbia, including a 9,000 hectare blaze in the province's northeast that was threatening to spread across the border to Alberta, the BC Wildfire Service said.

Because of the local threat, British Columbia declined to send firefighters to Alberta, though the agency said it had sent equipment like pumps and hoses.

The evacuees faced shortages of fuel and food but the frantic evacuation also brought stories of shared resources and babies born in work camps.

With some fleeing north to work camps operated by energy companies and others clogging the one highway south out of the city, evacuees scrambled to find fuel and a place to sleep as ash rained down upon the roads and the smell of soot permeated the air.

Twitter filled with offers of free food, housing and animal care as worried evacuees asked officials and strangers alike about the status of their homes.

Outside an Edmonton arena where evacuees are being housed, fuel hauler John Mihai, 63, said he stayed up watching a wall of flame as little as a mile away from his Fort McMurray home.

"You can't go to sleep when you see fire knocking on the door," Mr Mihai said.

"It was really close," he added. He boarded a bus in the early hours with just a duffle bag of food, a few pairs of socks and some photographs.

A steady stream of cars could be seen travelling south from the city, while thick black clouds billowed on the horizon.

Some families fled to Edmonton, the closest major city 435km to the south, and others took refuge in smaller communities just outside the danger zone.

Some 100 evacuees pitched tents near Gregoire Lake, about 15km west of the hamlet of Anzac southeast of Fort McMurray. Their cars, trucks and trailers lined the beach, and nearby petrol stations had run out of fuel.

Officials at the Anzac Recreation Centre, where some 3,000 evacuees took refuge, brought in more cots to supplement the hundreds that have filled up its hockey rink.

At the local supermarket, where depleting stocks were just replenished, five people at a time were let in while nearly 50 waited outside.

Two pregnant evacuees gave birth at the Noralta Lodge at Fort McMurray Village, a facility about 35km north of the city that normally houses oil sands workers, a manager said, adding that the mothers and babies were doing well.

In Conklin, south of Fort McMurray, evacuees have been checking into work camps since this morning, a security guard said.

The evacuees at the camps and gas stations, many of whom left without the chance to pack supplies, appeared lost and sad, and "the parents looked like they were trying to be happy for the kids," the guard said.