Fine Gael and Fianna Fáil parliamentary parties have been meeting separately to discuss the deal brokered between the two parties to facilitate a Fine Gael-led minority government.

Senators and deputies in both parties have been shown the document - 'A confidence and supply arrangement for a Fine Gael-led government' - underpinning the arrangement.

It gives a clear timeline for the suspension and examination of water charges before a Dáil vote takes place on the issue.

The core details also include Fianna Fáil abstaining on the election of a taoiseach, nomination of ministers and reshuffles; agreeing to facilitate budgets and vote against or abstain in votes of no confidence in the government, ministers or financial measures.

Fine Gael agrees on Fianna Fáil's right to bring forward policy proposals and bills from its own manifesto and promises to publish all deals with independents and other parties.

It also undertakes to have a reformed budgetary process and allow any opposition bills that are not money bills to pass to the second stage and proceed to committee stage with ten working weeks.

The party leaders will deal with any event that arises that has the potential to undermine the government.

The agreement between Fianna Fáil and Fine Gael will be reviewed at the end of 2018.

The FF-FG document recommends that Irish Water be retained and an external advisory board will be set up on a statutory basis to look at its operations.

It proposes suspending the water conservation grant and restoring funding to group water scheme based on pre-2015 levels.

It states that within six weeks the government will bring in legislation to suspend water charges for nine months and possibly longer if required.

It also states that within eight weeks it will appoint an expert commission to look at the funding model for Irish water, which will report within five months to a Dáil committee.

The committee will then report back within three months and its recommendation will be considered and voted on within a month by the Dáil.

Fianna Fáil leader Micheál Martin said the agreement was a first in Irish politics and that his party would implement it in good faith.

Asked about those who would receive their water bills in the coming days as the charges would be suspended in the next six weeks, he said it was the party's position that people should pay their bills and uphold the law.

The document proposes a 2:1 split in favour of public services over tax; a five year HSE service plan and focuses on reductions to USC particularly for low and middle income earners.

It supports the implementation of the Lansdowne Road Agreement and establishing a commission to look at pay levels, including entry levels.

It also wants to tackle the increased casualisation of work.

In relation to homelessness, it support an increase in social housing, retaining mortgage interest relief beyond December 2017, increasing rent supplement by 15% and provides for greater protection for mortgage holders and tenants against vulture funds.

In relation to health it proposes maintaining a humane approach to discretionary medical cards, introducing supports to reduce childcare costs and it supports increasing and ring-fencing €15 million in 2017 for a national treatment purchase fund.

Regarding crime, it proposes increasing garda numbers to 15,000 and giving the policing authority the power to review the boundaries of garda districts. 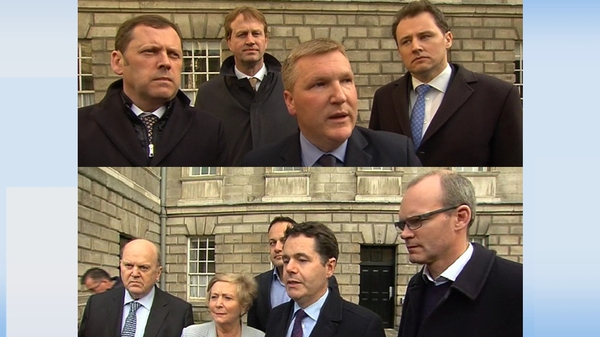