Ukraine has held memorial services to mark the 30th anniversary of the Chernobyl nuclear disaster.

In the early hours of 26 April 1986, a botched test at the nuclear plant in then-Soviet Ukraine triggered a meltdown that spewed deadly clouds of atomic material into the atmosphere, forcing tens of thousands of people from their homes.

Relatives of those who died as a result of the world's worst nuclear accident attended a candle-lit vigil in a Kiev church, built in their memory.

Others gathered for a service in Slavutych, a town 50km from Chernobyl that was established to house many of those who had to leave their homes forever.

The founder of Chernobyl Children International, Adi Roche, this afternoon addressed the United Nations General Assembly in New York to mark the anniversary.

She was invited to speak by the Belarusian government during its allocated time. Ms Roche spoke as part of a special session entitled '30 Years of Chernobyl Legacy for the Nuclear Safety of the World', a conference organised by the Permanent Mission of Ukraine to the United Nations.

Ireland is one of the biggest donor countries to the Belarus largely due to the contributions made to Ms Roche's charity - the Chernobyl Children's Project.

In her address, Ms Roche appealed to the General Assembly to recognise the work down by 700,000 liquidators who were sent in to try to contain the reactor fire.

She wants the role they played recognised and provision made for their medical and social care.

Ms Roche also asked the UN members to "use their power and influence" to complete the construction of a containment structure over the reactor and to move to a process of dismantling what remains there.

A giant €1.5bn steel-clad arch to enclose the stricken reactor site and prevent further leaks for the next 100 years is nearing completion. It was funded with donations from more than 40 governments.

Ms Roche called for funding to provide clean, uncontaminated food to the citizens of the area and that the contaminated zones be kept free of "cultivation and repopulation", and said she would like to have 26 April declared "Chernobyl Day" by the UN.

Candle-lit vigils have been held in Ukraine to mark 30 years since the #Chernobyl disasterhttps://t.co/Q2oD4CRfO5, reports @rtenews

More than half a million civilian and military personnel were drafted in from across the former Soviet Union as so-called liquidators to clean-up and contain the nuclear fallout, according to the World Health Organization.

Thirty-one plant workers and firemen died in the immediate aftermath of the accident, most from acute radiation sickness. Over the past three decades, thousands more have succumbed to radiation-related illnesses such as cancer, although the total death toll and long-term health effects remain a subject of intense debate.

Ukrainian Prime Minister Volodymyr Groysman said lessons learned from Chernobyl should be heeded all over the world.

Even with the new structure, the surrounding exclusion zone - 2,600sq.km of forest and marsh land on the border of Ukraine and Belarus - will remain uninhabitable and closed to unsanctioned visitors. 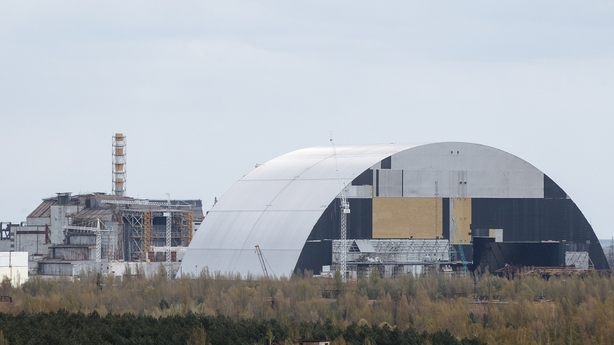 The disaster and the government's reaction highlighted the flaws of the Soviet system with its unaccountable bureaucrats and entrenched culture of secrecy. For example, the evacuation order only came 36 hours after the accident.

Former Soviet leader Mikhail Gorbachev has said he considers Chernobyl one of the main nails in the coffin of the Soviet Union, which eventually collapsed in 1991.