On this day 100 years ago, the Easter Rising began.

It was a day later than originally planned and on a much smaller scale.

Preparations for an insurrection in Ireland had begun soon after the outbreak of the First World War and were carried out by a small, radical group of separatist nationalists.

The date they had set for the Rising was Easter Sunday, 23 April 1916.

But plans unravelled in the days beforehand when a shipment of German arms was intercepted off the coast of Kerry and confusion over conflicting orders led to the cancellation of Irish Volunteer manoeuvres that were to provide the cover for the uprising.

Undeterred, the rebel conspirators met on Easter Sunday at Liberty Hall and decided to salvage something from the wreckage of their plans.

Here, Century Ireland takes you through that day and how events unfolded:

10.55 – Members of the Irish Volunteers are seen gathering in uniform at Blackhall Place. 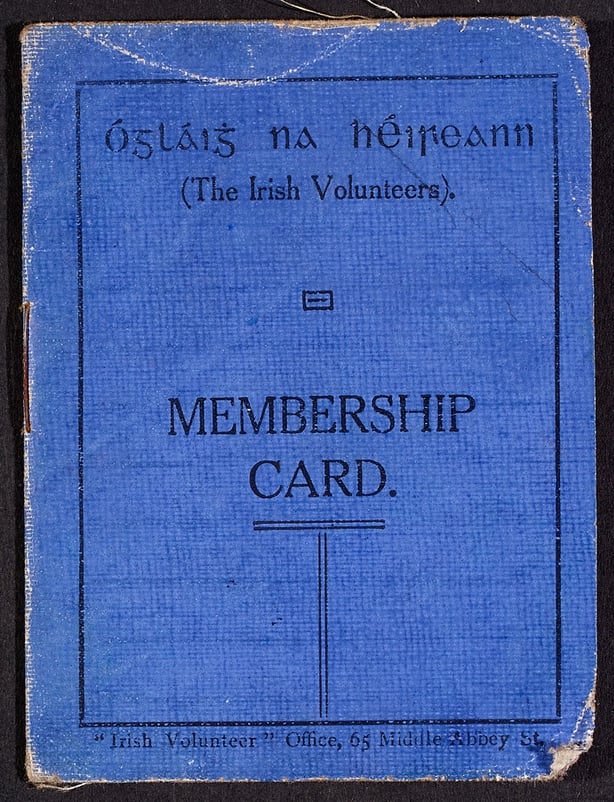 11.00 – Large numbers of Volunteers begin gathering at Liberty Hall. They are joined by members of the Irish Citizen Army. Volunteer activity is also observed around St Stephen's Green. 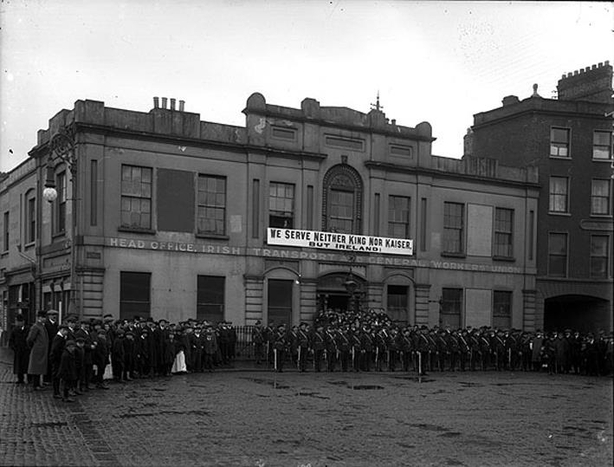 "We serve neither King nor Kaiser, but Ireland": Liberty Hall, headquarters of the ITGWU, from where members of the Irish Citizen Army set out on Easter Monday morning, 1916.

11.15 – Volunteers are observed moving towards the Grand Canal.

Interviewed by David McCullagh for Century Ireland, Professor Gearóid Ó Tuathaigh, NUIG, talks about how, from 1913 onwards, there was a surge in Volunteering and "parading in military formation".

11.35 – Volunteers, among them Thomas MacDonagh, are seen coming together at Bishop Street and have also moved into the Jacob's biscuit factory. 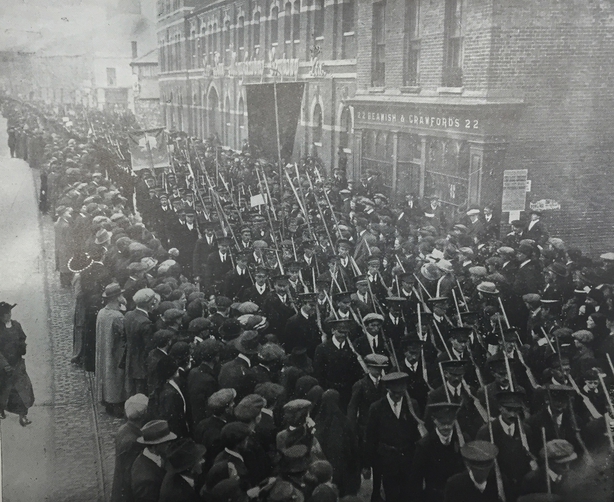 Armed ranks of the Irish Volunteers photographed in Cork on St Patrick’s day, just weeks before the Rising. 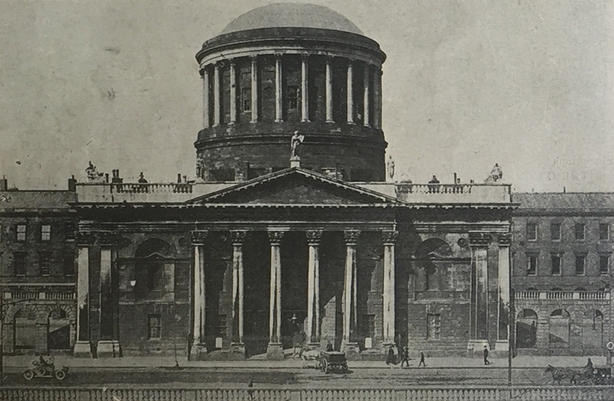 From Century Ireland's 'Sites of 1916' series, read about what happened during Easter week in the Four Courts area.

11.55 – The GPO is seized by rebels. Further groups dispatched to the Imperial Hotel, Clery’s and other shops facing O’Connell Bridge. 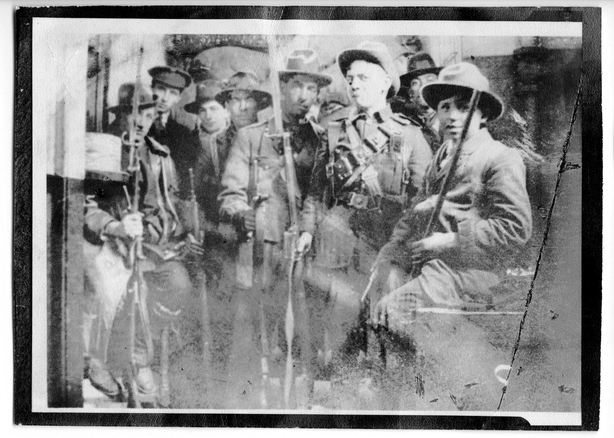 12.00 – A British ammunition convoy is ambushed near Four Courts.

A civilian, Michael Cavanagh is also killed when he tried to remove his cart from a barricade that had been built outside the Shelbourne Hotel. 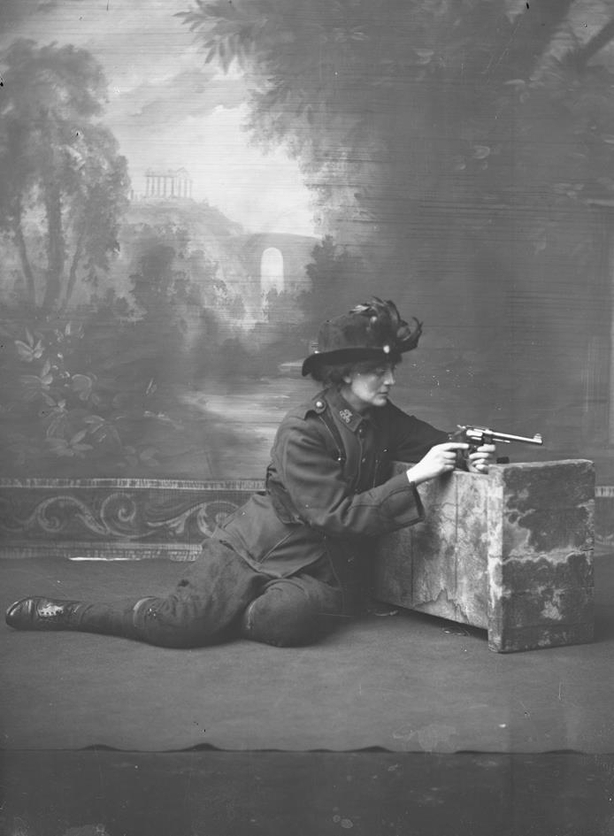 Prof Lucy McDiarmid, author of 'At Home in the Revolution', reflects on the 'untold stories' of women in 1916.

12.10 – Patrick Pearse appears outside the GPO and proclaims the establishment of the Irish Republic. 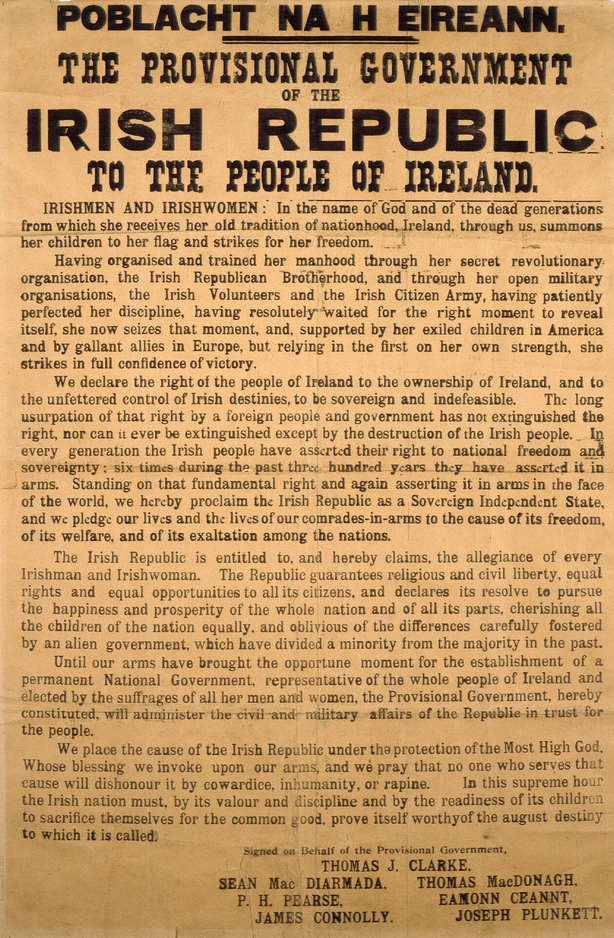 "We Were Stuck For The Letter E": Christopher J Brady was interviewed for the RTÉ Television project 'Portraits 1916' on 6 November 1965. Watch the interview here

12.17 – Rebels attack the Magazine Fort in the Phoenix Park. The attack fails, but the teenage son of fort’s commandant is killed.

12.30 – Boland’s Mills and Boland’s Bakery have been taken over by rebels.

12.30 – The British response begins. Colonel Cowan orders 6th Reserve Cavalry to send a patrol to Sackville Street and for the three battalions of the Dublin Garrison to send men to defend Dublin Castle. He also contacts the Curragh by phone and asks that the mobile column of the 3rd Reserve Cavalry be sent to Dublin. 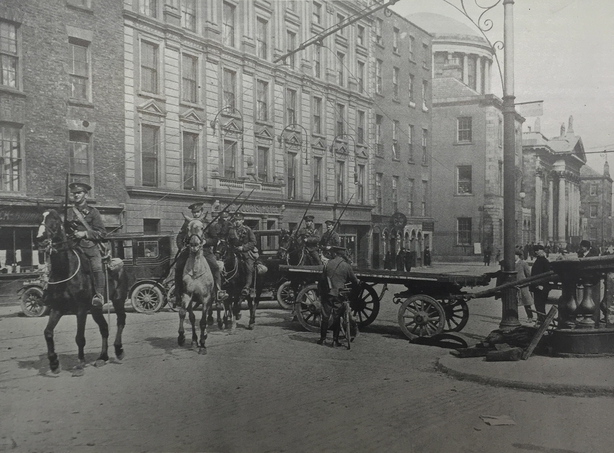 Who were the British in 1916? Prof Mike Cronin, Boston College-Ireland, sets out the varied ranks of British forces involved in the suppression of the Easter Rising.

12.35 – The Mendicity Institution is taken by Volunteers and its residents forced onto the street.

13.00 – The Argentinian-born Eamon Bulfin and other rebels raise two flags above the GPO: the Irish tricolour and a green one bearing the words ‘Irish Republic’. 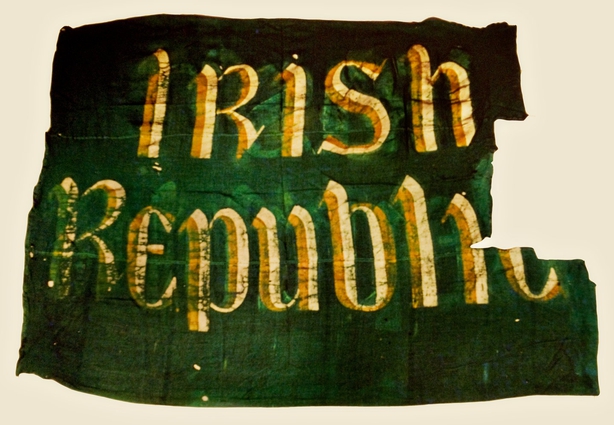 The flag of the Irish Republic, now held by the National Museum of Ireland, forms a key part of the 'material culture' of 1916, argue Lisa Godson and Joanna Brück

13.00 – Irish Volunteers have gathered in pockets across Co Galway led by Liam Mellows.

Dr John Gibney of History Ireland explains what happened in Galway in 1916. 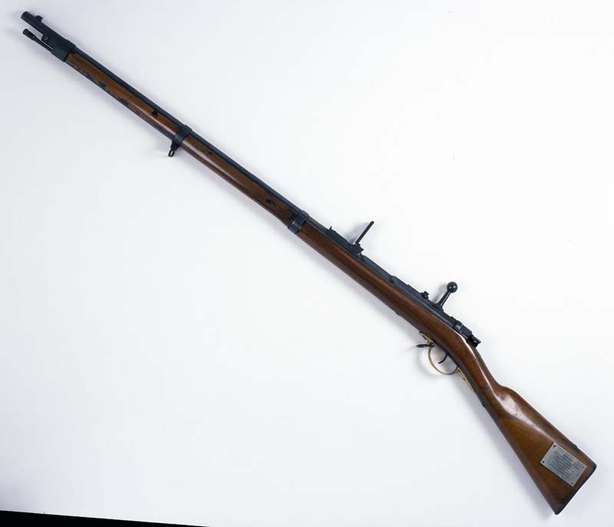 Could the Rising have been different if the Irish Volunteers had succeeded in landing guns and ammunition from Germany? Here, Dr John Gibney offers an alternative vision of the Easter Rising

13.15 – A troop of the 6th Reserve Cavalry proceeds down Sackville Street and is engaged by rebels in the GPO and buildings opposite. Four lancers killed.

Liam Daly who was a member of the GPO garrison recounts his experiences during Easter week 1916 in the radio series 'They Remember', first broadcast on RTÉ radio in April 1956.

13.15 – In addition to the buildings they have taken, Volunteers also secure control of various bridges across the city. It seems that they are attempting to erect a cordon around the centre of the city and control the main routes into the centre.

13.20 – Members of the Irish City Army, led by Seán Connolly, fail to take control of Dublin Castle. In their attack a policeman, Constable O’Brien, is killed. They move next door and take control of City Hall. 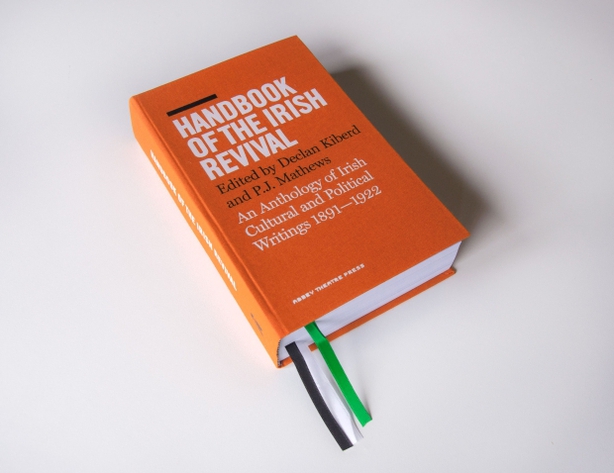 Seán Connolly also was an actor in the Abbey Theatre  - the years leading up to the 1916 saw an extraordinary overlapping of culture and national politics as Dr PJ Mathews, co-editor (with Declan Kiberd) of Handbook of the Irish Revival explains

13.30 – Rebels take control of Harcourt Railway Station but critically fail to take control of other major transport terminals in the city or the quays of the Dublin docklands.

13.40 – Pickets of the 3rd Royal Irish Rifles and 10th Royal Dublin Fusiliers arrive at the Ship Street Barracks after coming under fire at the Jacob’s Factory and Mendicity Institution respectively.

13.40 – British cavalry are attacked as they pass the Four Courts. 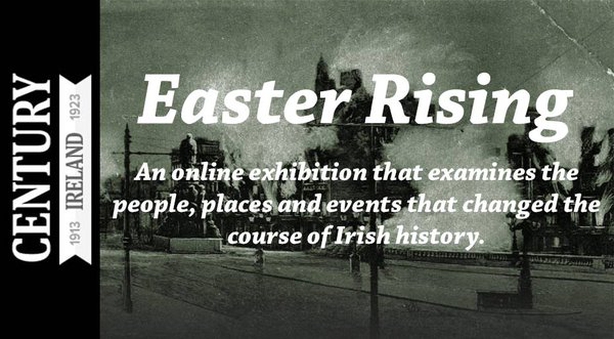 For more on the people, places and events of the 1916 Rising, visit Century Ireland’s online exhibition.

13.50 – Intense fighting around City Hall. The rebels are on the roof, while soldiers on the street fire at their positions. Seán Connolly is shot and killed and becomes the first rebel to die during the rebellion.

14.00 – There is increased fighting across the city as troops begin to respond to the Rising. As they try to move around the city they come under fire from positions held by the rebels. Troops from Richmond Barracks are attacked at the South Dublin Union, while others are engaged in Portobello.

"There was never a more motley crowd of men ever paraded to fight for Ireland": Listen to The Week of the Rising: Easter Monday 1916 via  RTÉ Archives

Who were the Revolutionary generation and how did they become radicalised?  Dr Fearghal McGarry, Queen University Belfast explains:

15.00 – Members of Georgius Rex veterans squad return to Beggars Bush after manoeuvres. They are aged and unarmed but come under fire from Volunteers on Northumberland Road. Four are killed. Pearse subsequently issues an order that no unarmed men, even if in uniform, are to be shot at.

15.30 – Looting begins across the city as people take advantage of the upheaval and the apparent lack of law and order.

16.00 – The military response to the Rising begins in earnest. Lead elements of the Curragh Mobile Column arrive and secure Kingsbridge Station.

16.30 – Trains carrying the main body of troops from the Curragh begin to arrive at Kingsbridge at 15-20 minute intervals. 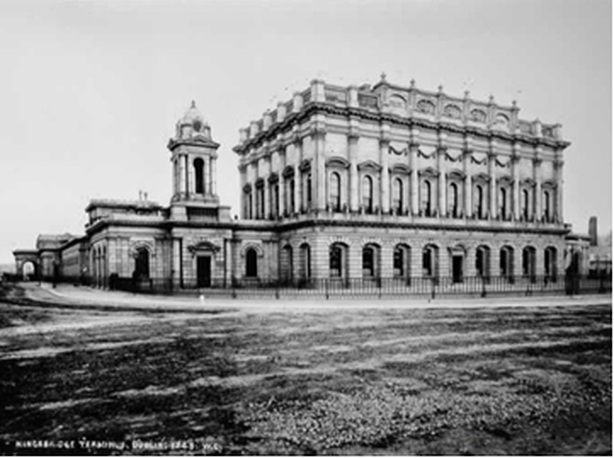 Kingsbridge Station was renamed Heuston Station in 1966 in honour of Seán Heuston: leader of the rebels inside Mendicity Institution.

16.30 – Detachment from the Army Musketry School at Dollymount filter through the city and secure the facilities at North Wall.

17.20 – Troops recently arrived at Kingsbridge Station have made their way to Dame Street and are engaged in a fierce battle with the rebels at City Hall.

17.30 – Rebels have secured positions on all sides of O’Connell Street Bridge.

19.00 – Officer Training Corps and porters defending Trinity College reinforced by numbers of British and colonial servicemen on leave in Dublin.

19.30 - Captain Elliotson of the Curragh Mobile Column conducts reconnaissance of rebel positions around City Hall and the Rates Office, which is shortly followed by a full scale attack on the rebels holding City Hall.

What, if any, effect did the Rising have on Irish soldiers serving in British uniform on the western front? Dr Timothy Bowman, University of Kent, talks to Century Ireland

20.00 – Rebels around Jacob’s Factory leave the on-street positions they held during the day and seek night time safety inside the factory.

Did you know? The Vatican was aware of plans for a Rising in Dublin in advance of it taking place. This and more are covered in this article by Oliver P Rafferty SJ, a member of the History department at Boston College 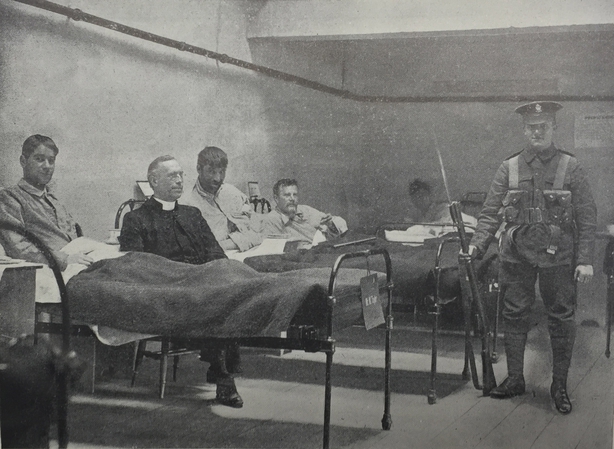 A priest sits with wounded rebels in the hospital set up in Dublin Castle. Many priests attended to the dying and wounded on both sides throughout the Rising.

20.00 – The army attack on City Hall continues and the interior of the building has been cleared with rebels retaining control of the roof.

20.30 – Looting continues in Sackville Street, and also fires begin breaking out in premises on the street. 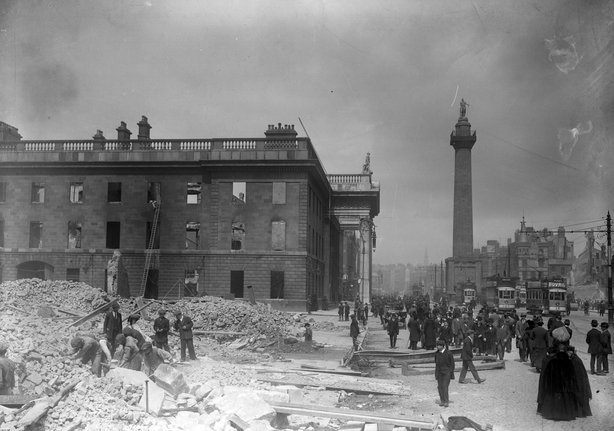 ‘The scope and scale of destruction visited upon Dublin during Easter week varied by location and escalated as the Rising progressed’ Dr Justin Stover, Assistant Professor of History at Idaho State University, examines the destruction of Dublin

23.15 – The rebels have stormed into the Gasworks on South Lotts Road and dismantled the machinery there which has left much of the south side of the city in darkness.

For more information, analysis, film and photographic galleries on the 1916 Rising, visit Century Ireland's online exhibition. Century Ireland is an online newspaper and digital resource that tells the story of the events of Irish life a century ago.