Japanese rescuers were digging through the rubble of buildings and mud today to reach dozens believed trapped after a powerful 7.3 magnitude earthquake struck a southern island, killing at least 32 people and injuring about 1,000.

The shallow earthquake hit in the early hours, sending people fleeing from their beds on to dark streets, and followed a 6.4 magnitude quake on Thursday which killed nine people in the area. Bad weather was forecast overnight, adding extra urgency to the rescue effort.

Television footage showed fires, power outages, collapsed bridges, a severed road hanging over a ravine and gaping holes in the earth. Residents near a dam were told to leave because of fears it might crumble, broadcaster NHK said.

"I felt strong shaking at first, then I was thrown about like I was in a washing machine," said a Tokai University student who remains isolated in the village of Minamiaso in Kumamoto province on the island of Kyushu.

"All the lights went out and I heard a loud noise. A lot of gas is leaking and while there hasn't been a fire, that remains a concern," the student, who is sheltering in a university gym with 1,000 other students and residents, told Japanese media.

About 422,000 households were without water and about 100,000 without electricity, the government said.

Troops were setting up tents for evacuees and water trucks were being sent to the area.

The National Police Agency said 32 people were confirmed dead. The government said about 190 of those injured were in a serious condition. 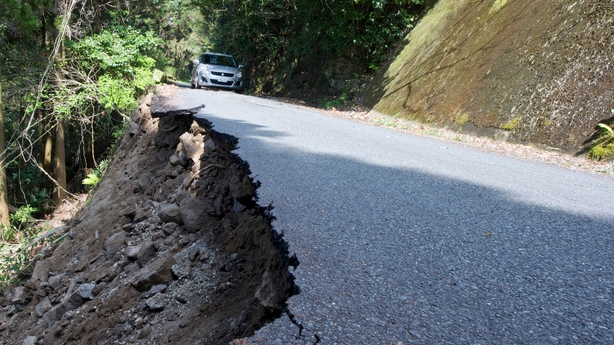 "The wind is expected to pick up and rain will likely get heavier," Prime Minister Shinzo Abe told a government meeting.

"Rescue operations at night will be extremely difficult...It's a race against time."

The epicentre of the quake was near the city of Kumamoto and measured at a shallow depth of 10 km, the United States Geological Survey (USGS) said. The shallower a quake, the more likely it is to cause damage.

The quake triggered a tsunami advisory which was later lifted and no irregularities were reported at three nuclear power plants in the area, a senior government official said.

Japan is situated on the seismically active 'ring of fire' around the Pacific Ocean and has building codes aimed at helping structures withstand earthquakes.

A magnitude 9 quake in March 2011 north of Tokyo touched off a massive tsunami and nuclear meltdowns at Fukushima, contaminating water, food and air for miles around. Nearly 20,000 people were killed in the tsunami.