Flood waters receded in many parts of Cork city but quayside flooding was reported again this evening at high tide.

Roads reopened and the flood waters receded after high tide passed at 8.30am.

A number of vehicles parked on Fr Matthew Quay overnight were damaged in the flooding.

There were no reports of homes or businesses being affected but Cork City Council warned residents and business owners to take precautionary measures to protect their properties.

The worst affected areas this evening include George's Quay, Union Quay, Morrison's Island and the South Terrace with surface water on the South Mall and parts of Pembroke Street.

Healy's Bridge on the Cloghroe Road remains impassable due to flooding.

There's surface water on the N25 Cork to Waterford road in both directions between junction J3 Tullagreen and J4 Barryscourt.

There are also reports of continuing flooding on roads around Cobh and Belvelly, while Catherine Street in Youghal remains impassable due to flooding.

Met Éireann earlier issued a Status Orange warning for Cork with between 40 and 70mm of rainfall expected along the south coast and in mountainous areas and this will remain in place until tomorrow morning.

CORK: The main road in World's End is closed. Avoid the area. https://t.co/qvBPcgxUj8 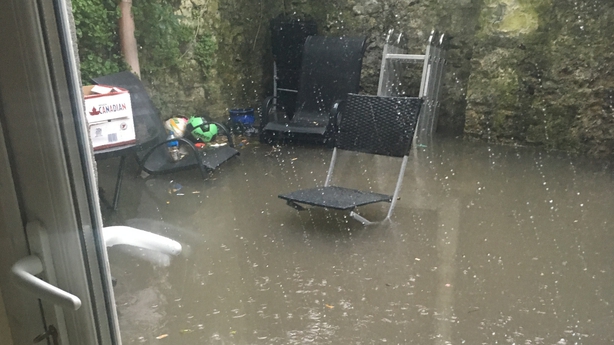 A Status Yellow alert is in place for all of Munster as well as Wexford, Galway and Mayo where winds will reach speeds of between 50 and 65km/h

Between 25 to 50mm rain is expected across counties Kerry, Limerick, Tipperary and Waterford with heaviest falls likely in mountainous areas.