Myanmar's parliament has sworn in its the first president with no military ties in more than half a century, after Aung San Suu Kyi's National League for Democracy swept to power following a landslide election win in November.

Htin Kyaw, a close friend and confidant of the Nobel peace prize laureate, was hand-picked by her to run Myanmar's government because a constitution drafted by the former junta bars her from the top office.

Relations between the armed forces and Ms Suu Kyi will define the success of Myanmar's most significant break from military rule since the army seized power in 1962.

In a short address to the chamber following the oath-taking ceremony, Htin Kyaw reiterated Ms Suu Kyi's stance on the importance of changing the 2008 charter, which entrenches the military's powerful position in the country's politics. Some NLD members had tears in their eyes.

"Our new government will implement national reconciliation, peace in the country, emergence of a constitution that will pave the way to a democratic union, and enhance the living standard of the people," said Htin Kyaw, sporting the NLD's traditional burnt orange jacket.

"We have the duty to work for the emergence of a constitution that is appropriate for our country and also in accordance with democratic standards."

Many NLD politicians were emotional.

"I couldn't sleep last night. Our president Htin Kyaw's speech is something we have never heard before in the country," the NLD's Thiri Yadana said after the ceremony.

"He promised that he will work for the country with the respect to our leader Aung San Suu Kyi. It's such a big step and this has happened because everybody pushed together forward."

Tension had simmered in the run-up to the election and as the NLD prepared to take power. Ms Suu Kyi wants to demilitarise Myanmar's politics but effectively needs the support of the military to do so.

The armed forces are guaranteed three ministries and control a quarter of parliamentary seats - enough to give them a veto over constitutional amendments and potentially limit the scope of Ms Suu Kyi's reforms.

Ms Suu Kyi is poised to steer the government from within, acting as a super-minister overseeing education, foreign affairs, electric power and energy - and the president's office. 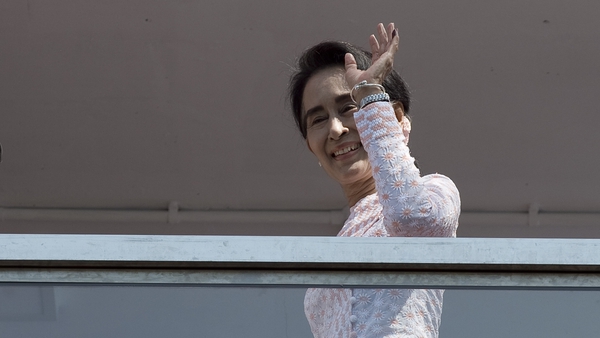