Events commemorating the 1916 Rising have been taking place across the country.

President Michael D Higgins attended a ceremony in Dublin's RDS this evening where he met relatives of those who died during the 1916 Easter Rising.

4,000 relatives were also at the event, where President Higgins gave a keynote address in which he called for Irish people to take responsibility for building a true Republic.

Mr Higgins said the ideals of the Proclamation can still inspire today.

"Our nation has journeyed many miles from the shell shocked and burning Dublin of 1916. We can see that in many respects we have not fully achieved the dreams and ideals for which our forebears gave so much," he said.

"A democracy is always and must always be a work in progress, and how we use the independence we have been gifted will continue to challenge us, morally and ethically.

"We must ensure that our journey into the future is a collective one; one in which the homeless, the migrant, the disadvantaged, the marginalised and each and every citizen can find homes, are fellow travellers; a journey which includes all of the multitude of voices that together speak of, and for, a new Ireland born out of contemporary imagination and challenges."

Following the event in the RDS, Mr Higgins was due to attend a 1916 commemoration concert in Liberty Hall Theatre. 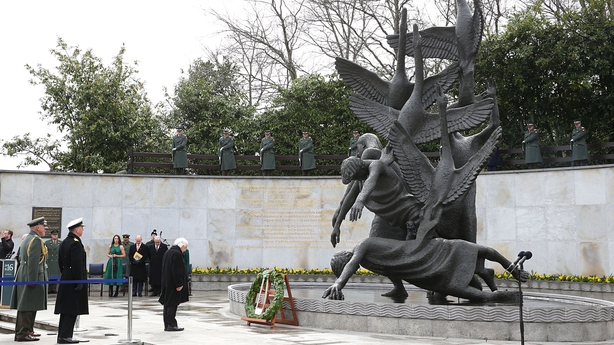 Earlier, Mr Higgins laid a wreath at the Garden of Remembrance as a weekend of commemorations marking the centenary of the Rising began.

700 relatives of 78 people who died during the Rising attended the ceremony, which was on the theme of 'Reflection and Remembrance'.

President Michael D Higgins lays a wreath in honour of those who gave their lives for Irish freedom #RTE1916 https://t.co/ATKPnYjX21

A minute's silence was held after President Higgins laid the wreath, followed by the Last Post.

The ceremony finished with the national anthem.

Relatives of the victims also laid wreaths in the Garden of Remembrance following the official State service.

Members of the acting government were in attendance.

Muriel McAuley, granddaughter of Thomas MacDonagh, one of the seven signatories of the Proclamation of Irish Republic, read a letter written by Pádraig Pearse from Kilmainham Gaol at the ceremony.

The event began with a rendition of The Parting Glass by the Island of Ireland Peace Choir.

The Island of Ireland Peace Choir sings 'The Parting Glass' at the Garden of Remembrance #RTE1916 https://t.co/6Z5rkcZD7b

Interview with President Michael D Higgins on the centenary of the 1916 Easter Rising #rte1916 https://t.co/VkB0tfDk61

Meanwhile, acting Taoiseach Enda Kenny has officially opened a 1916 exhibition in the GPO before doors open to the public next Tuesday as a permanent visitor centre.

Tomorrow wreaths will be laid in Glasnevin Cemetery and at the Stone Breakers Yard in Kilmainham Gaol before an Easter Centenary Parade through the city centre, which will be the longest in the history of the State.

Hundreds of thousands of people are expected to attend events in Dublin City centre over the weekend.

While the main focus of attention will be on the capital, the centenary is also being marked across the country.

Organisers have described the scale of the centenary programme as "unprecedented".

Full list of events for 'Reflecting the Rising' on Easter Monday

Those travelling to the commemorations are advised to use public transport as a number of roads throughout Dublin city centre will be closed to traffic, including O'Connell Street.

The Luas will be in operation today but not on Easter Sunday or on Easter Monday due to industrial action over pay. 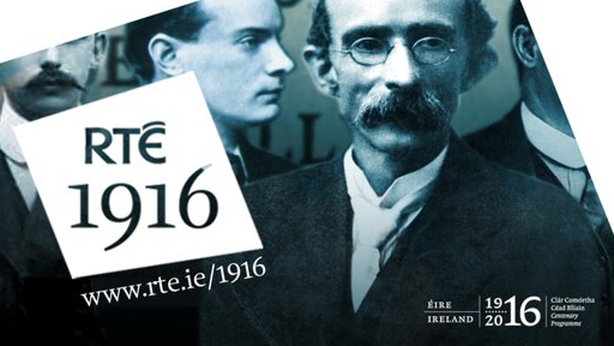 The Rising, which began on Easter Monday, 24 April 1916, was a seminal moment in Irish history, sowing the seeds for a war of independence.

Some 1,350 people were killed or injured during the six day insurrection while 3,430 men and 79 women were also arrested by the British.

15 of the rebel leaders, including Pádraig Pearse and James Connolly, were executed by firing squad at Kilmainham Gaol.

Cultural events are also being held in more than 200 venues across the city including 500 free talks, exhibitions, debates, film, performances and dramatisations, with six outdoor stages and activities for children and families.

Outside of Dublin simultaneous wreath laying ceremonies will take place in Athenry, Cork, Enniscorthy and Ashbourne.

In Co Galway, a handful of people have set out to commemorate a cycle undertaken by a volunteer from Connemara in 1916.

Early this morning, the cyclists set out from the home of Colm Ó Gaora in Ros Muc to emulate his journey through south Connemara and onwards to Killeeneen in the east of the county, where he met up with another volunteer.

The Catholic Archbishop of Dublin, Dr Diarmuid Martin, has said the authors of the 1916 Proclamation were men of faith who had dreams of hope for Ireland and for the Irish people.

Dr Martin told the congregation at the Easter Vigil Mass at Dublin's Pro-Cathedral that celebrating and commemorating the Easter Rising should not just consist of looking back.

He said the believer in the Risen Christ should be focused on the future and should be at the forefront in combating the darkness and despair all around us.