Hundreds of thousands of people are expected in Dublin city centre this weekend to commemorate the 100th anniversary of the 1916 Rising.

Organisers say the scale of the centenary programme is "unprecedented" and added that the terror attacks in Brussels yesterday have not had an impact on security plans for the weekend.

Gardaí say the threat levels remains that an attack in Ireland is possible but not likely.

The weekends events begin on Easter Saturday with a State ceremony at the Garden of Remembrance at midday.

It will be followed by an event for relatives of those who took part in the Rising in the RDS at 6pm.

On Easter Sunday morning, wreaths will be laid in Glasnevin Cemetery and the Stone Breakers Yard in Kilmainham Gaol before an Easter Centenary Parade, which will be the longest in the history of the State, proceeds through the city centre

The parade, which will take place along a 4.5km route from St Stephen's Green to Capel Street, involves 3,700 members of the Defence Forces, gardaí and the emergency services and will pass the GPO.

Spectators are being urged to take up places all along the route, which will have 22 viewing screens in place.

Gardaí say they will do everything possible to ensure that as many people as possible can see the parade.

On Easter Monday RTÉ  will host a major cultural event throughout the city centre from 11am until 6pm.

'Reflecting the Rising' will feature 500 free talks, exhibitions, debates, film and performances and a variety of family activities in more than 200 venues across.

Easter Monday will also see synchronised wreath laying ceremonies take place in the key 1916 garrisons including Boland's Mills, The Four Courts and Moore Street as well as in Athenry, Cork, Enniscorthy and Ashbourne.

These events are also open to the public.

Members of the public attending the events are urged to take public transport, which has enhanced services to accommodate those travelling to the commemorations. 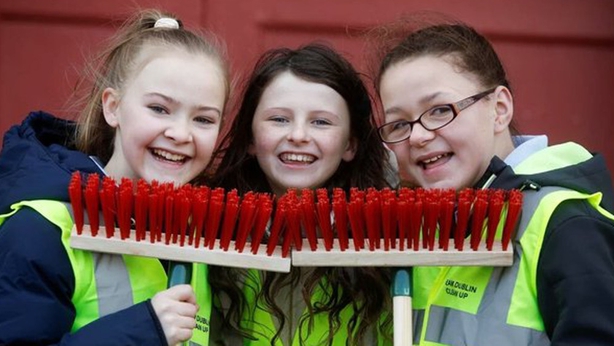 Around 2,000 people are expected to take party in a city-wide cleanup organised by Dublin City Council ahead of the celebrations.

The 'Team Dublin Cleanup' is taking place in each of the council's five administrative areas on Saturday, starting at 11am.

Around 60 groups have already signed-up and members of the public are welcome to join in on the day.

The biggest turnout is expected in the Thomas St area with groups meeting at St Catherine's Church.

Residents of Oliver Bond flats are organising their own group.

Another meeting point is the promenade in Clontarf with a Chinese-Irish group called Chirish doing their own cleanup of Bull Island.

There will be other meeting points in Smithfield, Pearse St and Finglas.

Senior executive with the council's waste management department Brian Hanney said: "This is a big week for tourism and we want to get people involved in making the city look well".