SIPTU President Jack O'Connor has confirmed that if Luas staff vote in favour of an all-out indefinite strike, the union leadership will sanction it.

Last night, after talks with Luas drivers broke down, SIPTU divisional organiser Owen Reidy said the drivers would now have to consider all options, including the possibility of a ballot for all-out strike action which would close the Luas indefinitely.

He said he could foresee the possibility of that happening in five to six weeks.

Mr O'Connor this afternoon said that Luas operator Transdev was now refusing to negotiate with the drivers and traffic controllers.

He said in that context, if there were a democratic ballot for indefinite strike action, he would have no hesitation in sanctioning it.

He noted that there is currently no national agreement on pay and industrial relations.

He criticised the fact that Transdev had been prepared to negotiate with the union despite viewing the workers' claim as excessive - but now that the workers had halved their claim, the company had walked away.

Meanwhile, the National Transport Authority has refused to indicate what provisions apply in the Transdev operating contract in the event of a prolonged strike, or in the event of Transdev walking away from the contract.

A spokesperson said the NTA was clearly disappointed at the current situation, but said this was a sensitive time, and it did not want any intervention to exacerbate the situation at a time when two grades are still in negotiations with the company at the WRC.

Transdev Ireland Managing Director Gerry Madden said that Transdev had no intention of walking away from the Luas contract.

Transdev earlier said the reduced salary increases demanded by drivers is still too high to allow for further talks as proposed strike action next week is set to go ahead.

Mr Madden said that although drivers had modified their claims for pay rises from 50% to 30% they remained too high.

Speaking on RTÉ's Morning Ireland, he suggested that the drivers reflect on the fact that their colleagues have found a platform for talks and they think about properly modifying their claims.

Mr Madden added that the door remained open for anyone with "reasonable" demands and that progress was made at the Workplace Relations Commission in relation to three grades of workers.

He said that out of four grades of workers that met at the WRC yesterday, two now have a platform for further discussions while he is hopeful a third will come on board soon.

Speaking on the same programme, SIPTU's Mr Reidy said LUAS management broke away from discussions with drivers unilaterally at the WRC yesterday. 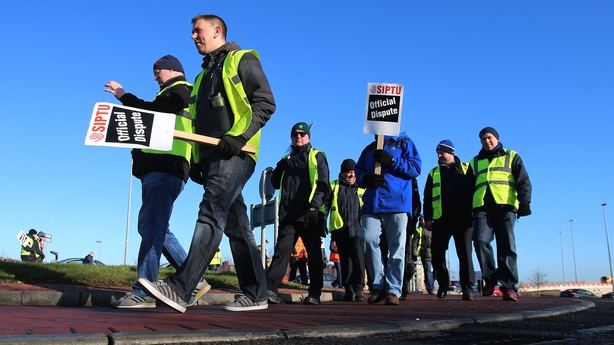 Mr Reidy said the message given to drivers was "sorry lads you're not worthy of discussions".

He criticised the decision to break off talks as "inexplicable", and said management had a gilt-edged chance to bring talks to a conclusion yesterday.

Mr Reidy said extra productivity was being demanded as a result of the Luas expansion with the cross-city line, which is due to begin services next year.

He confirmed industrial action planned for St Patrick's Day and the Easter weekend would take place.

There is also the possibility drivers and control staff would be balloted for an all-out strike.

Mr Madden described the decision to strike on St Patrick's day and over Easter as "an attack on the public".

The Minister for Transport, meanwhile, has said the Government cannot and will not change the contract upon which the Luas is provided.

Speaking on RTÉ’s Today with Sean O’Rourke, Paschal Donohoe said that the contract between Transdev and the National Transport was signed to run until 2019.

He said that if the government attempted to change the contract then it could be open to legal challenge from those who lost the tender for the Luas.

This he said would undermine the Government’s ability to do work like that in the future.

The Minister said that the issues will only be resolved in the Workplace Relations Commission and the Labour Court.

"What I'm now emphasising here again today is that the Government cannot change the contract, the inconvenience is unacceptable to commuters," said Mr Donohoe.

“The WRC and then potentially the Labour Court offer the only forums in which this dispute can be resolved."