President Michael D Higgins has paid tribute to the women involved in the 1916 Rising at an event in Dublin to mark International Women's Day.

Around 500 invited guests and members of the public attended the Royal Hospital in Kilmainham for the event.

Guests include women from across all sectors of society.

President Higgins, who delivered the keynote address, was met by an all-female Captain's Honour Guard made up of members of the Army, Navy and Airs Corps.

In his address, the President said that "as we come together to honour the women of 1916 it is appropriate that we recall...the part they played in laying the foundations of the Ireland in which we live, and that we reflect on all that remains to be done if we are to live up to the dreams of equality and justice that animated those women of our past".

President Higgins highlighted that the women of the Rising had to overcome many obstacles as they sought to join the rebellion.

The President outlined how after the Easter Rising women continued to play a huge part throughout the revolutionary period.

"Given the context of the early 20th Century, a time infused by cultural and social ideals of domesticity and respectability for women, when the conventional path for them was to tend to the affairs of home, not public ones, those women from our past were truly, boundary breakers," President Higgins said.

"As we reflect...on the contribution women of the Irish revolutionary movement, the irony of their subsequent marginalisation in the first five decades of our independence appears more starkly."

The event is being hosted by Olivia O'Leary.

The President's speech was followed by a performance of new music by Simon O'Connor, an extract from 'Left Behind - Songs of the 1916 Widows' performed by members of the RTÉ Concert Orchestra.

President Higgins viewed a specially commissioned 'Living for Ireland' quilt, in which each panel was designed by a woman activist to commemorate the 77 women held in Richmond Barracks in 1916.

A performance of a piece called 'Flames Not Flowers' by women from the Family Resource Centre in St Michael's Estate, Inchicore closed the event.

Meanwhile, the National Library of Ireland is to hold a special lecture to mark International Women's Day.

Delivered by Dr Marie Coleman of Queen's University Belfast, it will focus on the role played by women in the Irish revolution from 1916 to 1923.

The quilt made by 77 women to remember the 77 women interned at Richmond Barracks in 1916 #InternationalWomensDay pic.twitter.com/rhU7Wttyo5 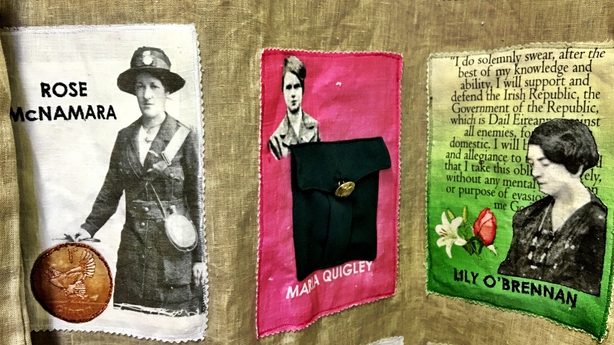