Members of the Irish Nurses and Midwives' Organisation at St Vincent's University Hospital in Dublin have staged a protest over staffing levels.

The protest took place between 1pm and 2pm outside the hospital.

Around 50 ward and emergency department nurses took part to highlight the ongoing dangers of staff and bed shortages.

The INMO has accused management of ignoring proposals from the Workplace Relations Commission agreed three weeks ago to tackle overcrowding and staffing at emergency departments in hospitals.

IMMO Industrial Relations Officer Philip McAnenley said that they were being "completely ignored by this employer".

Mr McAnenley said the Emergency Department in St Vincent's University Hospital was the only one out of 27 EDs across the county that was "non-compliant" with the WRC agreement.

Mr McAnenley also said a weekly meeting between hospital management and INMO ED representatives scheduled for this morning had been been cancelled.

He has called on the Health Service Executive, the Department of Health and Minister of Health Leo Varadkar to get directly involved on the issue.

Hospital management has rejected the INMO claim that it is ignoring the WRC agreement on tackling overcrowding.

In a statement, it said it "acknowledges there is overcrowding in the ED, but cannot understand why the INMO is opposed to having additional beds on the hospital wards to alleviate this overcrowding."

It also said that it was "actively and aggressively recruiting nurses nationally and internationally."

It said it had received funding for an additional 22 beds which have been open to full capacity since December 2015, "and further beds have been opened at times of increased demand to facilitate capacity during the winter months."

The Department of Health also issued a statement, saying "National Human Resources directors from the HSE meet regularly with the INMO to implement the proposals put forward by the WRC on 11 January and accepted by the INMO membership.

"The parties will revert to the WRC on 14 March for an initial review of implementation. Meanwhile the Emergency Department Taskforce Implementation Group continues to meet on a regular basis and the escalation policy is generally working well."

The Ireland East Hospital Group said it meets with the INMO on a weekly basis and is scheduled to meet them tomorrow morning. 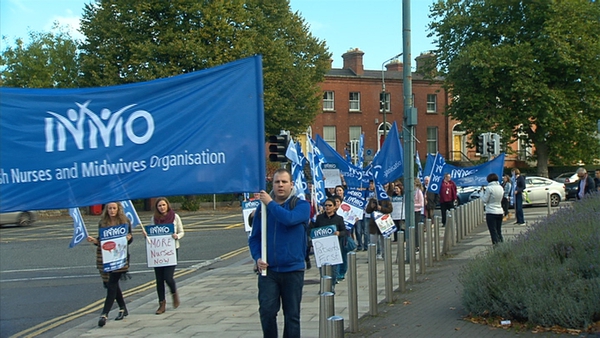