US and Cuban officials have signed an arrangement to restore scheduled air service between the two countries after half a century, setting off competition among US airlines for the best routes to the Caribbean island.

The signing ceremony in Havana formalised what officials had announced in December - that the two former Cold War rivals would add scheduled commercial airline service to the current charter flights.

"Today is a historic day ... signaling that for the first time in more than five decades the United States and Cuba will allow scheduled service between our two nations," US Transportation Secretary Anthony Foxx said at the ceremony.

US travel to Cuba, both authorised and surreptitious, has boomed since President Barack Obama and President Raul Castro agreed to start normalising relations in December 2014.

Shortly after the signing, JetBlue Airways, American Airlines and United Airlines each issued statements expressing interest, with the most competition expected for the 20 round-trip flights between US cities and Havana, the Cuban capital.

The deal, which officials called a memorandum of understanding, also permits up to  ten daily round-trips to each of nine other international airports in Cuba.

US airlines have until 2 March to submit route applications to the US Transportation Department, which will spend about a month collecting information and likely decide in the summer who can fly from which US cities to Havana.

The department has said it will attempt to "maximise public benefit" in assigning the flights.

Washington and Havana restored diplomatic ties in July after a 54-year break, but commerce remains limited by the US trade embargo, which includes a ban on US tourism to the Communist-led island.

The Republican majority in Congress has defied President Obama's call to rescind the embargo, so he has used his executive authority to relax some trade and travel restrictions.

US officials said authorised travel has risen 54% since rapprochement, but Cuban data show US arrivals increased by 77% to 161,000 in 2015, a disparity explained by US citizens breaking the tourism ban and flying to Cuba through third countries.

Legally, US travelers still have to fit one of the 12 categories of authorised travel, such as for educational or religious activities, but violators appear to face little risk of being prosecuted.

The Treasury Department's Office of Foreign Assets Control has not fined any US citizens for visiting Cuba since Mr Obama took office in January 2009, its database shows. 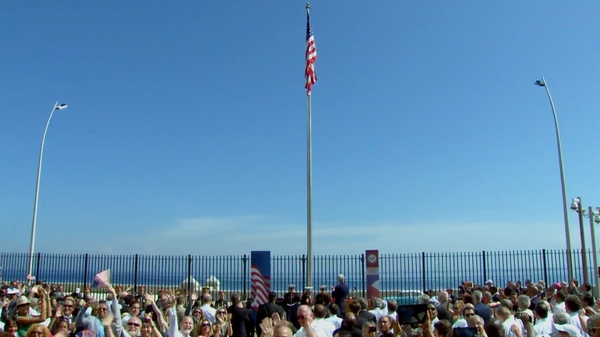 US flag raised at embassy in Cuba