Some 70,000 Syrian refugees could reach the Turkish border if the military campaign there continues at this intensity, Turkish Prime Minister Ahmet Davutolgu said, adding Turkey will not shut its gates to the refugees.

Mr Davutoglu made the comments in a speech to his party in parliament.

Turkey, which is already sheltering 2.5 million Syrian refugees, has largely kept its gates closed in recent days as tens of thousands seek refuge from Syrian and Russian assaults on opposition-held territory in northwest Syria.

Speaking yesterday, Turkey's Deputy Prime Minister Numan Kurtulmus said there was a fear that fighting in Aleppo would spark the arrival of up to 600,000 refugees at its border in a "worst case scenario".

The clashes in the north of Aleppo province - sparked by a week-long government assault with Russian air support - have displaced tens of thousands of people.

Mr Davutoglu said that around 30,000 people were already massed at the Turkish border.

Huge crowds of refugees, mainly women and children, have been forced to wait at the Oncupinar border crossing, which remains closed with only medical emergencies allowed through.

"Our objective for now is to keep this wave of migrants on the other side of Turkey's borders as much as is possible, and to provide them with the necessary services there," Mr Kurtulmus said.

The Turkish government has insisted for several days that its open-door policy to refugees fleeing the Syrian war remains unchanged and that it is ready, if necessary, to accommodate a new wave of arrivals.

"Obviously, as always, we will provide for our Syrian brothers and accept them when necessary," Mr Davutoglu told a joint press conference with German Chancellor Angela Merkel. 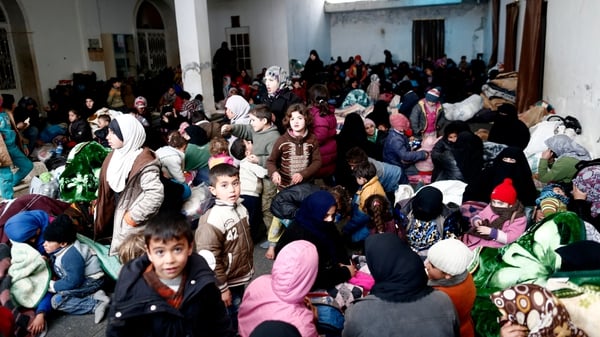 Turkey will let in trapped Syrian refugees 'if necessary'