GE2016 will be another "defining" election for Micheál Martin. No big deal there - every election Martin has fought since he was elected as the eighth leader of Fianna Fáil back in January 2011 has been a defining election, writes RTÉ Southern Editor Paschal Sheehy.

The fact is, such has been the scale of the job he has had to do as Fianna Fáil leader, he has been defined or judged each and every time he has faced an electoral contest - a sort of continuous assessment, if you like.

None of these contests were likely to make him: only a return to Fianna Fáil's past glories would do that, and that wasn't going to happen in the short term. And yet, each one had the potential to break him as party leader.

The upcoming general election will be no different. 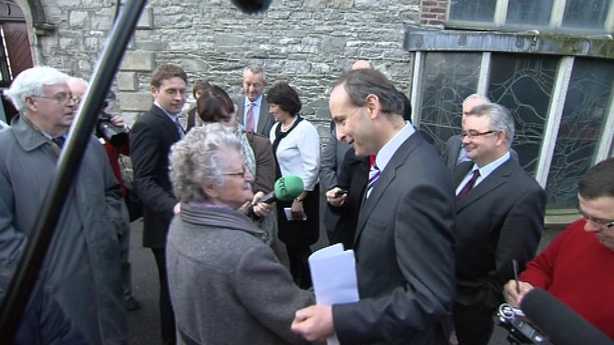 A month into the job as Fianna Fáil leader and very much on the back foot, the former minister for health led Fianna Fáil into the 2011 general election.

This was a defining election if ever there was one, and it was utterly disastrous for the party.

Blamed by the electorate for the economic crash, not only was Fianna Fáil booted out of office, the party suffered the single biggest electoral reversal in its history, losing 58 seats and returning to Leinster House with just 20 TDs.

Fianna Fáil lost all bar one of its seats in Dublin, there wasn't one woman among its depleted ranks and it had no TDs in 25 of the 43 constituencies.

The party was wrecked and the job of rebuilding it could scarcely have been any bigger, or more difficult. 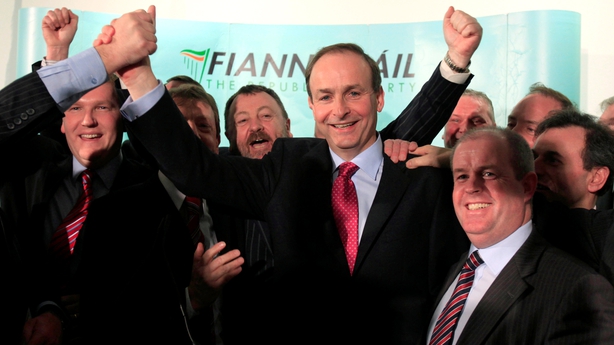 Martin has since been rewarded for his considerable hard work with moderate success.

His judgement calls have been suspect on occasion but, on balance, of the big calls he has made as leader, more have been correct than incorrect.

In any event, he was leading a parliamentary party that had lost so many of its members and was so wounded after the 2011 election that no one had the stomach to challenge him for the leadership.

This was particularly so as long as he could show that he had set the party on the path of political recovery. But it won't always be this way.

Plus it's not beyond the bounds of possibility that Martin's leadership could be challenged, even if the party meets its target of doubling the number of its TDs in the 32nd Dáil to 40 or more deputies.

Martin's re-building of Fianna Fáil has been steady, rather than spectacular.

The first electoral contests after the general election of February 2011 possibly came too soon on the road to redemption for Fianna Fáil - the presidential election and the Dublin West By-Election (caused by the death of Brian Lenihan) were both held in October 2011, just nine months into his leadership. 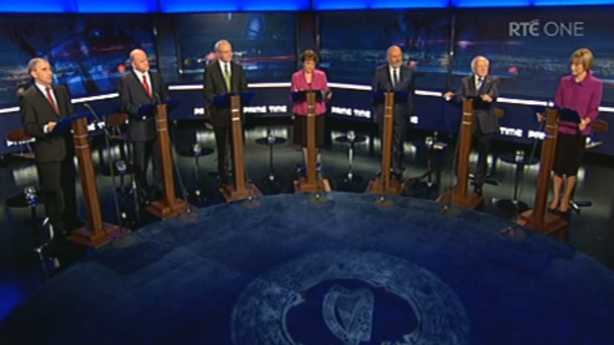 The Cork South-Central TD decided that Fianna Fáil should sit out the presidential election. In hindsight, this was possibly one of his better judgement calls - it was too soon after the economic crash for Fianna Fáil to countenance winning any national election and if the party wasn't going to win it, what was the point of contesting it?

Fianna Fáil was a mere shadow of itself, resources were tight and bodies were thin on the ground. Better to focus on areas where results could be delivered, like the work of rebuilding the party and the upcoming Dublin West By-Election.

However the manner in which Martin arrived at and communicated the decision not to contest the presidential election was poor. He did himself, his standing and the party no favours by it.

Brian Crowley, a proven vote-winner for Fianna Fáil in a number of European election campaigns in Munster and a candidate whose appeal extended outside the boundaries of traditional Fianna Fáil support, offered to run.

Martin snubbed the offer, and approached the former Late Late Show presenter Gay Byrne instead. Gaybo beat around the bush for a while before finally declining the invitation. It was all a bit of a mess.

In the Dublin West by-election, held on the same day as the presidential election, Fianna Fáil's candidate David McGuinness put in a very credible performance, finishing second with 21.7% of the first preference vote. 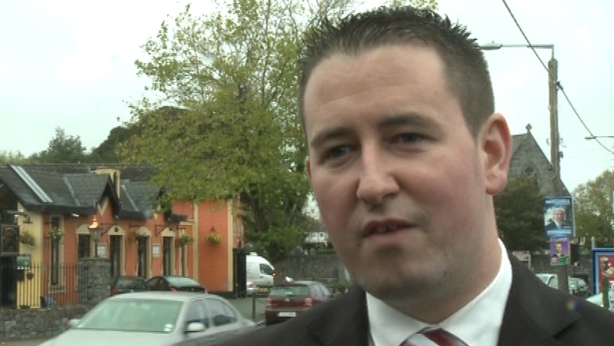 The performance reflected well on the party leader. More importantly from the party's perspective, it offered a glimmer of hope for the future.

He then returned to the job of rebuilding his party, with an eye to the local elections due in 2014.

In an effort to restore the country's finances, the Fine Gael-Labour Government imposed a series of budgetary and other measures which were deeply unpopular.

Fianna Fáil – even though the party had actually initiated that process in the dying days of Brian Cowen's administration – benefitted from the government's unpopularity.

An Ipsos MRBI poll for the Irish Times in February 2013 - just two years after Fianna Fáil's disastrous 2011 general election - put support for the party at 26%. Fianna Fáil had all of a sudden become the most popular party in the country again and its brand was losing some of its toxicity.

The position was confirmed in another Ipsos MRBI poll, conducted in June 2013, as support for the Government parties continued to fall.

But polls are one thing, elections are quite another. So all eyes were on the results of the local elections the following May. 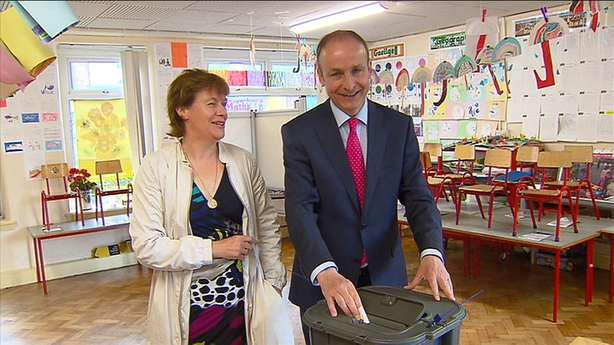 They didn't disappoint Martin and Fianna Fáil as the party won more than a quarter of the first preference vote.

Fianna Fáil surpassed Fine Gael to be the largest party in local government, both by the number of councillors and by share of the vote. The gloss was taken from the result by a disappointing performance in the European elections, but only slightly.

More importantly, the results of the local elections offered the party a tremendous platform on which to launch its campaign for the upcoming general election.

Since then, while opinion polls indicate that support for Fianna Fáil has fallen back somewhat, electoral success has continued.

A year after the local elections success, at 2.20am on 24 May last year, Bobby Aylward delivered a first by-election victory for Fianna Fáil in almost two decades in Carlow-Kilkenny. 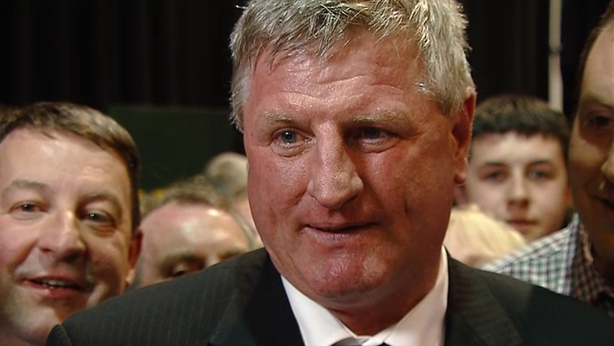 His victory came in the contest to replace Phil Hogan - the man who had appealed to Fianna Fáil voters in 2011 to lend his party their votes. In the Carlow-Kilkenny by-election, those votes finally trickled home!

So Martin faces into GE2016 with his party in relatively good shape and most of the heavy lifting done in terms of rebuilding Fianna Fáil.

His position, however, is not without its problems and his leadership not totally secure. Like almost everything in politics, there are risks ahead for Fianna Fáil no matter how well the party performs and what course its leader chooses to take.

Even if the party has an exceptional day at the polls in GE2016, it's hard to see it going beyond 40 seats and that's only half way to an outright majority.

Martin has narrowed his options considerably by ruling out coalition with Fine Gael or Sinn Féin, and by declaring that Fianna Fáil won't be a minority party in a coalition government.

It could be that he is consigning himself and his party to the opposition benches in the 32nd Dáil, although he disputes this. 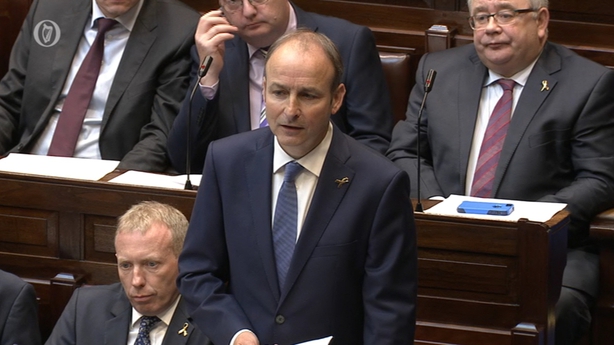 It may be (and again he disputes this) that in order to continue rebuilding his own party and to stem the rise of Sinn Féin, he has already decided that another spell in opposition is the best option.

If that is the case then the following questions arise: Will his party back him as leader? Will he continue to enjoy the support of his parliamentary party and the wider party? Or will he face a challenge to his leadership?

Given the years Fianna Fáil has spent in government and the way it has dominated the political scene in this country, as it approaches the 90th anniversary of its foundation in just over two months time, it is difficult to see how Martin's position as party leader would be secure, unless he has added the position of taoiseach too.