Tánaiste Joan Burton has emphatically ruled out forming a coalition government with Fine Gael if that government required the support of the controversial independent TD Michael Lowry.

Speaking on RTÉ's This Week programme, Ms Burton said there was "no way that the Labour Party is going to be involved in a government which is basically being supported by Michael Lowry".

She said the Labour Party had a track record of standing up to corruption - a reference most likely to the McCracken Tribunal's conclusion that Mr Lowry's conduct in relation to a land deal involving businessman Ben Dunne was "profoundly corrupt, to a degree that was nothing short of breathtaking".

The High Court last week also dismissed Mr Lowry's challenge to the Moriarty Tribunal's decision to only award him one third of his legal costs.

Ms Burton said there were "some very serious comments made by the judge" about Mr Lowry in his judgment, in which he said Mr Lowry had engaged in a litany of falsification and deception".

She defended her decision to appoint former trade unionist David Begg as chairman of the new National Pensions Authority without Mr Begg going through an application process.

She said she didn't insist that Mr Begg apply for the job and take his chances "because it wasn't required".

"The regulations set out clearly that where there's someone of exceptional qualifications and standards," she said.

Ms Burton added that she felt Mr Begg fit that criteria and that he had been closely involved in significant pension issues relating to the former Waterford Crystal operation.

In relation to spending, Ms Burton said that Labour and Fine Gael were in agreement on the sum which would be available over the next five years for additional allocation, over and beyond current spending - known as the "fiscal space".

She said this was €12bn, similar to the sum suggested by Fine Gael, but disputed by Professor John McHale of the Fiscal Advisory Council, who said that the sum which will be available is considerably lower once current spending is adjusted to take into account demographic factors among other things.

Ms Burton described Labour's growth plans as conservative, with the party's proposals being based on a growth forecast of 3.1% compared to the Department of Finance's forecast of 3.5% for the coming year.

She also said Labour was committed to bringing down the overall  debt from its current figure of €183bn to 75% of that over the next five years.

"In order to get our debt down to 75%, we're actually providing for 2% more of a paydown of debt than required by European rules," she said. 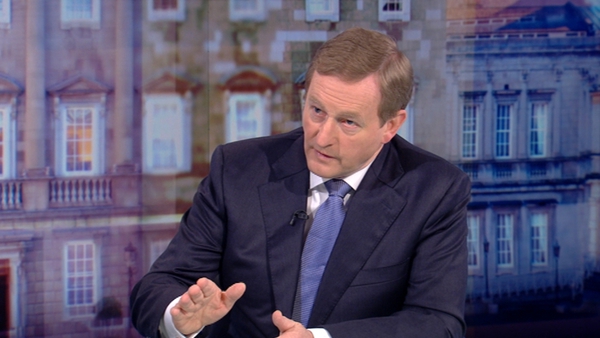 Kenny has no intention of doing business with Independents