The banking inquiry has found that senior executives and directors across financial institutions were responsible for the failure of banks during the financial crisis.

In its final report, the inquiry found that "bank failure, which required the intervention and support of the sovereign, was the responsibility of senior executive management and the boards of directors".

State support for the banking sector to address the crisis was around €63bn.

Although the committee was unable to make findings of fact against any individual, paragraph 9 of the conclusions to chapter 1 of the report comes closest to mirroring the findings of the British parliamentary inquiry into the failure of UK banks in 2013.

The UK inquiry named 13 individuals, all either chief executives or chairmen of six UK banks.

The Irish inquiry report found no one single event or decision led to the failure of the banks in the lead-up to the banking crisis.

It also found the introduction by the banks of tracker mortgages to the Irish market was based on a "false presumption by banks of the stability of available funding at or near the ECB rate".

The report found the banks became over reliant on the wholesale markets in borrowing short term to lend long term.

It said this made banks more vulnerable to a liquidity risk which was not recognised. Before the crisis it said bank lending had traditionally been funded from customer deposits.

The report said the arrival of foreign banks into the Irish market increased competition for Irish banks in the late 1990s.

It said new and more aggressive lending products and practices in the period leading up to the crisis "ultimately adversely affected the customer".

The report said commercial real-estate lending was concentrated among a small number of debtors and in many cases, lending was inadequately secured by paper equity and personal guarantees.

The report found there was a culture of excessive executive remuneration in the banks.

It recommends that all members of bank boards should have requisite financial skill sets and experience.

It said they should undergo ongoing compulsory Continuing Professional Development appropriate to banking, to include risk and governance.

The report recommends risk appetite in banks should be clearly defined at board level and should be the key driver for defining overall strategy.

It calls for a full risk assessment of new bank products on both the lending and deposit side and approved by the full board, prior to being introduced to the market. 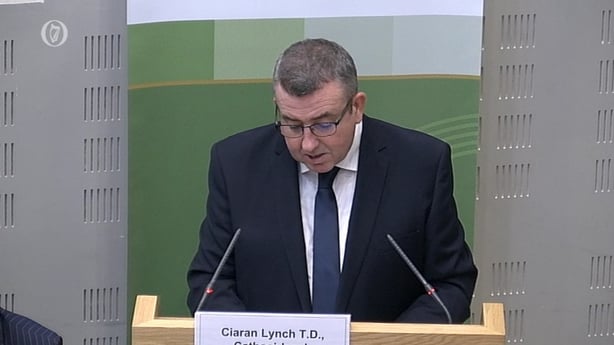 In his introductory statement to the report, Mr Lynch said there were in reality two crises: a banking crisis and a fiscal crisis.

He said the crisis in the banks was directly caused by decisions of bank boards, managers and advisors to pursue risky business practices.

Exposures resulting from poor lending to the property sector not only threatened the viability of individual financial institutions but also the financial system itself.

Regulators did not respond fully to the systemic risk, he added. In particular, the Financial Regulator adopted a principles-based "light-touch" and non-intrusive approach to regulation.

The Central Bank, the leading guardian of financial stability of the State, underestimated the risks to the Irish financial system.

The Government presided over a period of unprecedented growth in tax revenues, but adopted a fiscal policy where significant, long-term expenditure commitments were made on the back of unsustainable cyclical, construction and transaction-based revenue.

When the banking crisis hit and the property market crashed, the gulf between sustainable income and expenditure commitments was exposed and the result was a hard landing, laying bare a significant structural deficit in the State finances.

The Chairman of the Banking Inquiry, Ciarán Lynch has said that the report is the best possible explanation about what happened in the lead-up to the financial crisis.

Speaking on the Six One Mr Lynch said the report goes well beyond earlier reports in terms of content and timeline and has made recommendations which, along with proper decisions, will ensure such a crisis will not happen again.

"What we have done in carrying out this inquiry is put that information together to give the Irish public the best possible explanation as to what actually happened ... and to bring forward findings and recommendations to ensure that this type of crisis will never be visited upon us again," he said.

He said there were opportunities for political intervention, but as the years passed it was a case of "damage limitation".

Mr Lynch said the ECB should have engaged with the inquiry, that it failed to give its account and failed to be held accountable.

The Dáil debate on the findings of the banking inquiry is scheduled for tomorrow after the Order of Business.