Four Palestinians have been shot dead after trying to stab Israeli security forces in two incidents in the southern West Bank, according to the Israeli military.

"Three attackers, armed with knives, attempted to stab soldiers guarding the Gush Etzion junction," a statement said, adding that troops responded by firing at the assailants.

A military spokeswoman told AFP all three were killed.

Gush Etzion is a settlement bloc south of Jerusalem, and its junction has been a focal point in three months of Palestinian attacks targeting Israeli security forces and civilians.

A short while later, a Palestinian armed with a knife attempted to stab soldiers northeast of Hebron, a statement said. "The force thwarted the attack and shot the assailant, resulting in his death."

The three would-be assailants from the Gush Etzion incident were identified in Palestinian media as Muhanad Kawazbeh, 20; Ahmed Kawazbeh, 21, and Alaa Kawazbeh, 20, all from Sair village, northeast of Hebron.

They were said to be relatives of Ahmed Kawazbeh, 18, who was shot dead after stabbing a soldier at the Gush Etzion junction on Tuesday.

Twenty-two Israelis, an American and an Eritrean have been killed in Palestinian attacks including stabbings, car rammings and gunfire targeting security forces and civilians since 1 October.

At the same time, 143 Palestinians have been killed by Israeli forces, most while carrying out attacks. 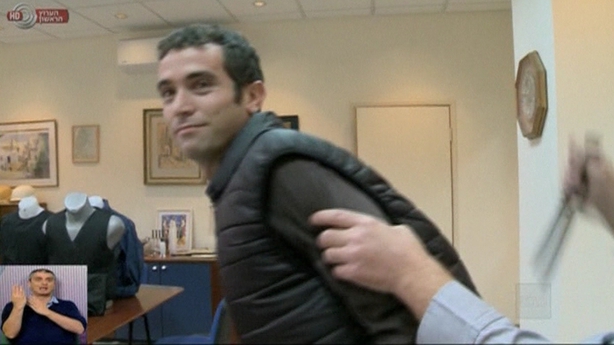 Meanwhile, an Israeli reporter was stabbed and lightly injured as he was demonstrating a protective vest trial on camera for a news story.

Eitam Lachover from IBA News conducted the trial at the headquarters of the vest's manufacturer, FMS Enterprises Migun in Petah Tikva, where a company representative assisted him.

The IBA report showed an interview with the FMS representative ahead of the trial, in which he said: "As you can see, this product is very, very flexible, it is very thin, very light and it's possible to reach very good protection levels with it.

"Its advantage is that you can also use it not only in the military or the police but it can be also marketed to the civilian market."

During the trial, Mr Lachover wore the knife-proof vest, in which several layers of protective pieces were inserted, and another company representative stabbed him.

It appeared that one of the last stabs penetrated the vest and the trial immediately stopped.

Later in the day, Mr Lachover described the incident, saying that he had a superficial wound and that the company representative escorted him to hospital.

He also added that the vest was not a final product yet.

An Israeli TV reporter was injured while demonstrating a protective vest for a news story https://t.co/SpY17EFwM8 https://t.co/M0F1UlK1KM

He said: "We went out to do a story for the news bulletin on fashionable protective clothing, clothes that are currently developed by FMS company. It's a company that works for many years with the police, the army and provides them with protective clothes.

"In order to really illustrate how it looks like, we wanted to visualise what really happens in case of real stabbing. It should be noted that this vest you see now in the footage is not a final product, it's not something that is for sale. It was more like an improvisation done for the sake of the trial.

"They took the vest, the protective piece was put inside. Apparently there was nothing to hold it from the bottom and in the third or forth stabbing, it slipped out and I got the knife in my back."

Company CEO Avi Blum said the vest lining was not properly closed from both sides during the trial and the protective pieces slipped away.